Changes in gene expression suggest possible therapies to prevent and treat COVID-19 based on dexamethasone, calcitriol (vitamin D) and tocopherol (vitamin E) that disrupt the inflammatory “vicious circle” in COVID-19 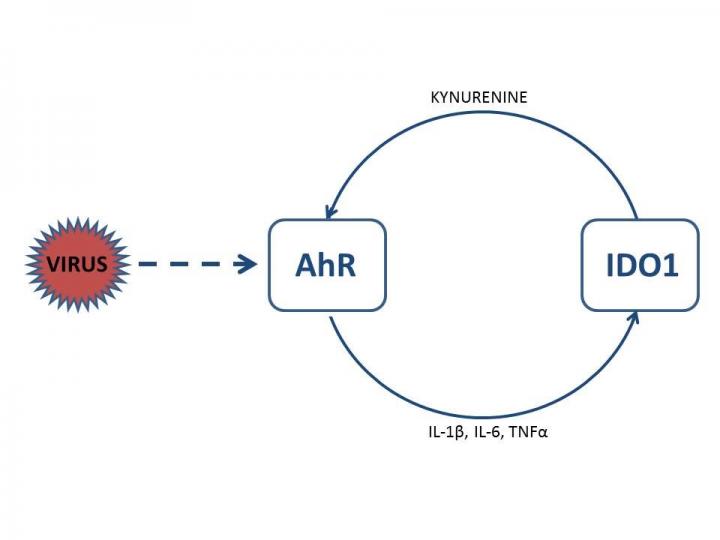 Amsterdam NL, June 29, 2020 – The SARS-CoV-19 virus initially has a limited capability to invade, attacking only one intracellular genetic target, the aryl hydrocarbon receptors (AhRs). Yet it leads to widely diverse clinical symptoms, suggesting multiple pathogenic mechanisms. Writing in Restorative Neurology and Neuroscience, investigators describe how excessive activation of AhRs via the IDO1-kynurenine-AhR signaling pathway, which is used by many pathogens to establish infection, leads to “Systemic AhR Activation Syndrome” (SAAS). The authors also hypothesize that therapies targeting downregulation of AhRs and IDO1 genes should decrease severity of infection.
SAAS underlies inflammation, thromboembolism, and fibrosis that may lead to severe disease and death from COVID-19. When corona virus (CoV) infection persists, it activates IDO1 by massively releasing cytokines. This in turn perpetuates the already extensive viral activation of AhRs, and the self-limiting control mechanisms of the host immune response may derail, triggering the cytokine storm underlying the most severe symptoms of COVID-19.
“The SARS-CoV-19 virus is a living example of viral simplicity complicated by extreme target complexity,” explains lead author Waldemar A. Turski, MD, PhD, Department of Experimental and Clinical Pharmacology, Medical University in Lublin, Poland. “Direct activation of AhRs by CoVs may lead to diverse sets of phenotypic disease pictures, depending on time after infection, overall state of health, hormonal balance, age, gender, comorbidities, but also diet and environmental factors modulating AhRs.”
The authors demonstrate that CoVs are perfect viruses leaving nothing to chance and show how difficult it is to stop them after cell invasion. They describe how many of the features and symptoms of COVID-19 may be dependent on AhR activation, including thromboembolism, fibrosis, multiple organ injury, and brain damage. They also explore how environmental factors, such as urban dust and diesel fumes, may activate AhRs and make humans more prone to pathogens, including CoV. However, physical exercise plays a positive role in IDO1 function and downregulates AhRs.
The investigators hypothesize that when AhRs remain activated and clinical symptoms are mild, eliminating factors known to increase AhR activation or implementing factors known to suppress AhR activation should decrease the severity of infection. When the disease is fully established and symptoms are severe, IDO1 is believed to be continuously activated in addition to the CoV activation of AhRs. “Such a vicious cycle can only be efficiently interrupted by simultaneous downregulation of both AhR and IDO1. There is currently, however, no licensed medication specifically and simultaneously downregulating the activity of both AhR and IDO1,” notes co-author Les Turski, MD, PhD, German Center for Neurodegenerative Diseases, Bonn, Germany.
Co-author Artur Wnorowski, PhD, Department of Biopharmacy, Faculty of Pharmacy, Medical University in Lublin, Poland, undertook an intriguing challenge that yielded surprising results. “I analyzed major databases to identify chemicals that downregulate both AhR and IDO1, or AhR gene expression. I selected 596 molecules and an in-depth analysis of 23,526 experiments involving these molecules identified either a single molecule that repeatedly reduced AhR and IDO1 or AhR gene expression in human cells.”
The molecules were dexamethasone for AhR and IDO1, and calcitriol, the active form of vitamin D, which is also known to inhibit the spread of other viral infections, for the AhR gene. Likewise, tocopherol, a form of Vitamin E, might downregulate IDO1 and is known to play a positive role in response to viral infections and inflammation in aging. The authors call for epidemiological studies and prospective trials to determine if calcitriol and tocopherol supplementation should be recommended for the prevention of SARS-CoV-2 infections.
“Our concept is based on 40 years of research experience with the metabolism of tryptophan. Activation of IDO1 in immune cells leads to release of kynurenine, a tryptophan metabolite, activates AhR. IDO1 was the clue that brought us to the AhR-IDO1 axis concept and exposed the role that AhR may play in the pathogenesis of COVID-19,” says Dr. Waldemar Turski.
The Editor-in-Chief of Restorative Neurology and Neuroscience, Professor Bernhard Sabel from the University of Magdeburg, Germany, in recognition of novelty of the authors’ vision says: “The turning point defined by the authors’ concepts requires critical review of our habits, our relationships with the environment, and our education and research in the context of AhR modulation. We seem to be at the very beginning of novel discovery pathways and only see the very tip of an iceberg of unknown size that may critically affect our future.”
Because the authors are reporting on changes in gene expression only, their hypotheses need to be tested before claiming that there are benefits of any therapy in modulating the SARs-CoV-2 infection. Randomized controlled trials and large observational studies are needed.