How to spot deepfakes? Look at light reflection in the eyes 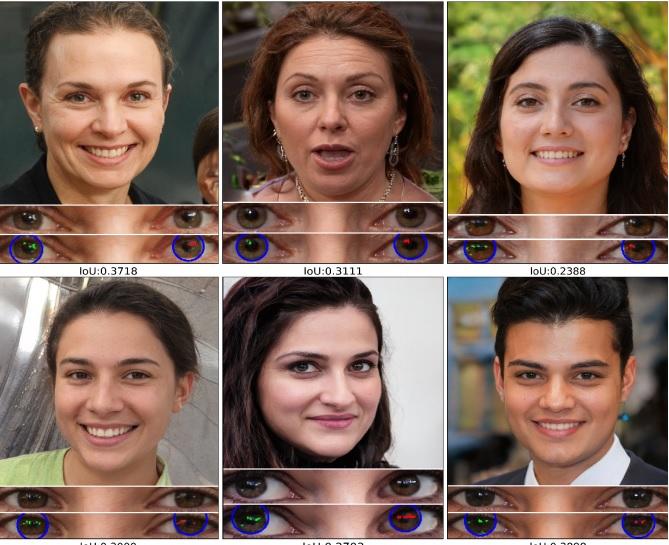 Credit: Credit: www.thispersondoesnotexist.com and the University at Buffalo.

BUFFALO, N.Y. – University at Buffalo computer scientists have developed a tool that automatically identifies deepfake photos by analyzing light reflections in the eyes.

The tool proved 94% effective in experiments described in a paper accepted at the IEEE International Conference on Acoustics, Speech and Signal Processing to be held in June in Toronto, Canada.

“The cornea is almost like a perfect semisphere and is very reflective,” says the paper’s lead author, Siwei Lyu, PhD, SUNY Empire Innovation Professor in the Department of Computer Science and Engineering. “So, anything that is coming to the eye with a light emitting from those sources will have an image on the cornea.

“The two eyes should have very similar reflective patterns because they’re seeing the same thing. It’s something that we typically don’t typically notice when we look at a face,” says Lyu, a multimedia and digital forensics expert who has testified before Congress.

Co-authors are Shu Hu, a third-year computer science PhD student and research assistant in the Media Forensic Lab at UB, and Yuezun Li, PhD, a former senior research scientist at UB who is now a lecturer at the Ocean University of China’s Center on Artificial Intelligence.

When we look at something, the image of what we see is reflected in our eyes. In a real photo or video, the reflections on the eyes would generally appear to be the same shape and color.

However, most images generated by artificial intelligence – including generative adversary network (GAN) images – fail to accurately or consistently do this, possibly due to many photos combined to generate the fake image.

Lyu’s tool exploits this shortcoming by spotting tiny deviations in reflected light in the eyes of deepfake images.

To conduct the experiments, the research team obtained real images from Flickr Faces-HQ, as well as fake images from http://www.thispersondoesnotexist.com, a repository of AI-generated faces that look lifelike but are indeed fake. All images were portrait-like (real people and fake people looking directly into the camera with good lighting) and 1,024 by 1,024 pixels.

The tool works by mapping out each face. It then examines the eyes, followed by the eyeballs and lastly the light reflected in each eyeball. It compares in incredible detail potential differences in shape, light intensity and other features of the reflected light.

‘Deepfake-o-meter,’ and commitment to fight deepfakes

While promising, Lyu’s technique has limitations.

Lyu, who has researched machine learning and computer vision projects for over 20 years, previously proved that deepfake videos tend to have inconsistent or nonexistent blink rates for the video subjects.

In addition to testifying before Congress, he assisted Facebook in 2020 with its deepfake detection global challenge, and he helped create the “Deepfake-o-meter,” an online resource to help the average person test to see if the video they’ve watched is, in fact, a deepfake.

He says identifying deepfakes is increasingly important, especially given the hyper-partisan world full of race-and gender-related tensions and the dangers of disinformation – particularly violence.

“Unfortunately, a big chunk of these kinds of fake videos were created for pornographic purposes, and that (caused) a lot of … psychological damage to the victims,” Lyu says. “There’s also the potential political impact, the fake video showing politicians saying something or doing something that they’re not supposed to do. That’s bad.”