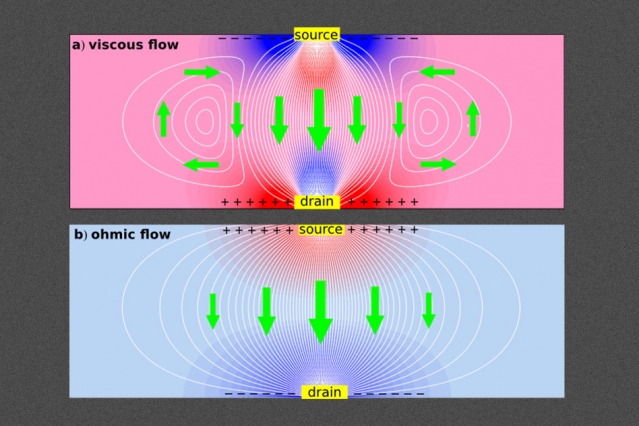 Electrical resistance is a simple concept: Rather like friction slowing down an object rolling on a surface, resistance slows the flow of electrons through a conductive material. But two physicists have now found that electrons can sometimes cooperate to turn resistance on its head, producing vortices and backward flow of electric current.

The prediction of “negative resistance” is just one of a set of counterintuitive and bizarre fluid-like effects encountered under certain exotic circumstances, involving systems of strongly interacting particles in a sheet of graphene, a two-dimensional form of carbon. The findings are described in a paper appearing today in the journal Nature Physics, by MIT professor of physics Leonid Levitov and Gregory Falkovich, a professor at Israel’s Weizmann Institute of Science.

Electrons in graphene move in a neatly coordinated way, in many ways resembling the movement of viscous fluids through a tube where they are strongly affected by turbulence and vortices. This is due to interactions producing a long-range current-field response, quite different from the simple “individualist” behavior expected under ordinary circumstances, when electrons move in straight lines like pinballs bouncing among the ions, as described by Ohm's law, the researchers say.

The notion of electron viscosity had been suggested before in theory, but it had proven difficult to test because nobody had come up with a way to directly observe such phenomena. Now, Levitov and Falkovich say they have figured out a set of signs that can serve as an indicator of such collective effects in electron flows.

This work is “a remarkable application of theoretical insight to the prediction of a new experimentally observable effect,” says Subir Sachdev, a professor of physics at Harvard University who was not involved in this work. He says this insight is “very significant and opens a new chapter in the study of electron flow in metals.”

“There was always a kind of dichotomy between what’s easy to do in theory and what’s easy to do in experiments,” Levitov says. “There was a search for an ideal system that would be easy for experimentalists to work with and also be a benchmark system with strong interactions that would show strong interactive phenomena.” Now, he says, graphene is providing many of the sought-after qualities of such a system.

On a graphene surface, Levitov says, “you have electrons behaving as relativistic particles coupled by interactions that are long-range and pretty strong.” With a possible exception of exotic fluids such as quark-gluon plasmas, he says, graphene may be closer to the notion of a perfect “strongly interacting fluid,” an important theoretical concept in quantum physics, than any other system we currently know.

The collective behavior of the charge carriers in such strongly interacting systems is quite peculiar. “In fact, it’s not so different from fluid mechanics,” Levitov says. The way fluids move can be calculated “with very little knowledge of how individual atoms of the liquid interact. We don’t care that much” about the individual motions; it’s the collective behavior that matters in such situations, he says.

In the graphene environment, quantum effects, which are ordinarily insignificant at scales larger than that of individual particles, play a dominant role, he says. In this setting, “we show that [the way charge carriers move] has collective behavior similar to other strongly interacting fluids, like water.”

How to detect it?

But while that’s true in theory, he says, “the question is, even if we have it” — that is, this fluid-like behavior — “how do we detect it? Unlike ordinary fluids, where you can directly track the flow by putting some beads in it, for example, in this system we don’t have a way to view the flow directly.” But because of the two-dimensional structure of graphene, while electrons are moving through the material “we can get information from electrical measurements” done from the outside, where it is possible to place probes at any point on the sheet.

The new approach relies on the fact that “if you have a viscous flow, you expect the different parts of the liquid to drag on each other and produce whirlpools. They will create a flow that will drag on neighboring particles and will drive a vortex,” Levitov says. Specifically, a direct flow in the middle of a graphene ribbon will be accompanied by whirlpools developing along the sides. In those whirlpools, electrons can actually flow in the direction opposite that of the applied electric field — resulting in what the physicists refer to as negative resistance.

While the whirlpools themselves can’t be observed directly, the backward movement of the electron flow in certain parts of the material can be measured and compared with the theoretical predictions.

While Levitov and Falkovich have not personally carried out such experiments, Levitov says that some recent enigmatic findings do seem to fit the predicted pattern. In an experiment that has just been reported, he says “researchers saw something similar, where the voltage on the side turns negative. It’s very tempting to say” that what they saw is a manifestation of the phenomena predicted by this work.

The comparison of electron behavior in graphene to fluid dynamics “is not just an analogy, but a direct correspondence,” Levitov says. But there are important differences, including the fact that this fluid bears electrical charge, so it behaves not exactly like water flowing in a pipe but rather in a way similar to some plasmas, which are essentially clouds of charged particles.

Because this is early-stage work, Levitov says, it’s too early to tell whether it might ever have any practical applications. But one surprising implication of this work is that heat transport can couple strongly to charge transport. That is, heat can ride atop of charge flow and propagate in a wave-like fashion much faster than under ordinary conditions — perhaps as much as 10 to 100 times faster. This behavior, if achieved, might be harnessed at some point, perhaps in sensing devices with very fast response times, he speculates.

Andre Geim, a professor of condensed matter physics at the University of Manchester in the U.K. who was not involved in this work, says, “It is a brilliant piece of theory, which agrees very well with our recent experimental findings.” Those experiments, he says, “detected the vortices predicted by Levitov's group and showed that the electron liquid in graphene was 100 times more viscous than honey, contrary to the universal belief that electrons behave like a gas.”

Geim adds that graphene is becoming increasingly used in a variety of applications, and says, “Electronic engineers cannot really utilize the material without an understanding of its electronic properties. Whether your electrons move like bullets or swim in treacle creating whirlpools obviously makes a huge difference.”