In the SOS response, the bone marrow releases reparative progenitor cells to try to heal the heart. 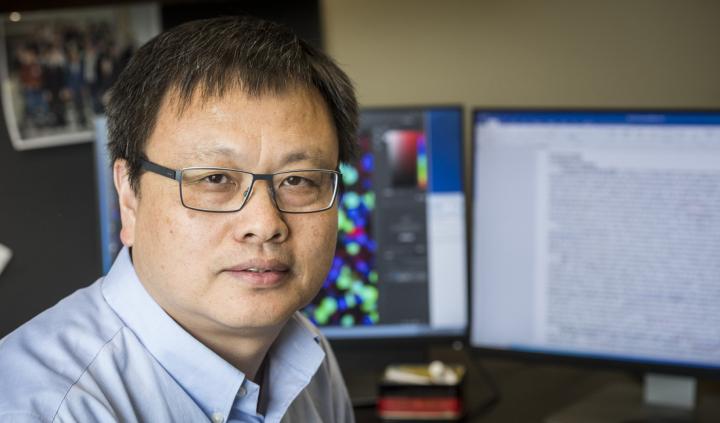 University of Alabama at Birmingham and Chinese researchers now report that exosomes are key to the SOS signal that the heart muscle sends out after a heart attack. After the heart attack, the exosomes in the bloodstream carry greatly increased amounts of heart-specific microRNAs — an observation seen in both mice and humans. These exosomes preferentially carry the microRNAs to progenitor cells in the bone marrow. Inside those progenitor cells, the microRNAs turn off a specific gene that allows the progenitor cells to leave the bone marrow and enter the bloodstream. The cells then travel to the heart to attempt repairs.

The investigators say discovery of this novel pathway — a signal from the damaged heart to a systemic response by the reparative bone marrow cells — can now be leveraged to improve cell-based cardiovascular repair after heart attacks.

The study — led by Gangjian Qin, M.D., professor in the UAB Department of Biomedical Engineering and director of the Molecular Cardiology Program, and Min Cheng, M.D., Ph.D., Huazhong University of Science and Technology, Wuhan, China — is published in the journal Nature Communications.

For 15 years, it had been known that progenitor cells are released from the bone marrow after a heart attack. These cells move to the damaged heart muscle to attempt repairs. However, many efforts to improve that repair have yielded only modest efficacies, at best.

Similarly, for a dozen years, it was known that a handful of microRNAs that are abundant in heart muscle are greatly elevated in the bloodstream after an acute heart attack, both in animals and in humans.

The UAB and Chinese researchers have now linked those two observations by identifying the cargo carrier that ferries those heart-muscle microRNAs, locating the preferred destination of the cargo carrier and describing the microRNA mechanism that releases the progenitor cells from the bone marrow.

The researchers found that, after heart attack in a mouse model, levels of four heart-muscle-specific microRNAs — known as myo-miRs — were elevated 10,000- to 100,000-fold in peripheral blood after heart attack. These myo-miRs were preferentially taken up by bone marrow mononuclear cells, and to a lesser extent, kidney cells. MicroRNAs, or miRNAs, are small, non-coding RNAs that can regulate gene expression. The human genome appears to make at least 2,000 different miRNAs.

It turned out that exosomes in the blood overwhelmingly carried three of the myo-miRs after a heart attack — miR-1a, miR-208a and miR-499-5p. The fourth myo-miR, miR-133a, was partially carried by exosomes. Notably, a significant increase of circulating exosomal myo-miRs was also seen in humans after the serious heart attacks called acute ST-elevation myocardial infarction.

It was known that blockade of a chemokine receptor called CXCR4 mediates mobilization of bone marrow progenitor cells into the blood circulation and contributes to repair of heart muscle after heart attacks. Since one of the myo-miRs showed a potential binding to the CXCR4 mRNA, all four of the myo-miRs were tested on bone marrow mononuclear cells. Surprisingly, each myo-miR alone was able to downregulate expression of CXCR4. Furthermore, exosomes from heart-attack mice — but not from non-heart-attack mice — downregulated CXCR4 in bone marrow mononuclear cells.

“Our work reveals that exosomes released from the ischemic heart are in fact mediating
the systemic response of bone marrow progenitor cells to the site of injury,” the researchers reported. “These observations are compelling, as circulating myo-miRs are not only a bio-marker, but also a functional constituent of the intricate crosstalk between the ischemic heart and the remote bone marrow organ.”

“Because of the critical role of bone marrow progenitor cells in the ischemic tissue repair,” they said, “the mechanism identified in this study could be an important component of the physiological response to ischemic injury and thus could be leveraged for treatment of ischemic heart disease.”

The media shape public opinion about surrogacy and homosexuality

NASA finds Gabrielle’s strength on its northern side