KANSAS CITY, MO—Dec. 7, 2022—New findings from the Stowers Institute for Medical Research uncover critical insights about how a dangerous selfish gene—considered to be a parasitic portion of DNA—functions and survives. Understanding this dynamic is a valuable resource for the broader community studying meiotic drive systems. 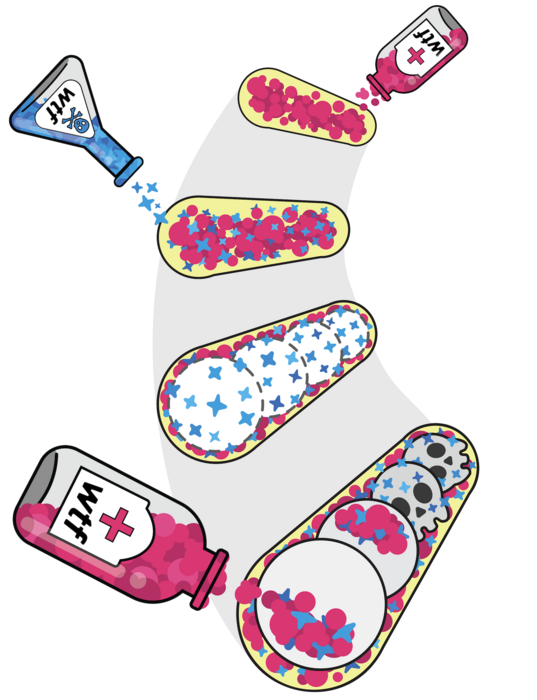 KANSAS CITY, MO—Dec. 7, 2022—New findings from the Stowers Institute for Medical Research uncover critical insights about how a dangerous selfish gene—considered to be a parasitic portion of DNA—functions and survives. Understanding this dynamic is a valuable resource for the broader community studying meiotic drive systems.

A new study, published in PLoS Genetics on Dec. 7, 2022, reveals how a selfish gene in yeast uses a poison-antidote strategy that enables its function and likely has facilitated its long-term evolutionary success. This strategy is an important addition for scientists studying similar systems including teams that are designing synthetic drive systems for pathogenic pest control. Collective and collaborative advancement on understanding drive may one day lead to the eradication of pest populations that harm crops or even humans in the case of vector borne diseases.

“It’s quite dangerous for a genome to encode a protein that has the capacity to kill the organism,” said Stowers Associate Investigator SaraH Zanders, Ph.D. “However, understanding the biology of these selfish elements could help us build synthetic drivers to modify natural populations.”

Drivers are selfish genes that can spread in a population at higher rates than most other genes, without benefiting the organism. Previous research from the Zanders Lab revealed that a driver gene in yeast, wtf4, produces poison protein capable of destroying all offspring. However, for a given parent cell’s chromosome pair, drive is achieved when wtf4 is found only on one chromosome. The effect is a simultaneous rescue of only those offspring that inherit the drive allele, by delivering a dose of a very similar protein that counteracts the poison, the antidote.

Building upon this work, the study, led by former Predoctoral Researcher Nicole Nuckolls, Ph.D., and current Predoctoral Researcher Ananya Nidamangala Srinivasa in the Zanders Lab, discovered that differences in the timing of generating poison and antidote proteins from wtf4 and their unique distribution patterns within developing spores are fundamental to the drive process.

The team has developed a model they are continuing to investigate for how the poison acts to kill the spore—the equivalent of a human egg or sperm in yeast. Their results indicate that poison proteins cluster together, potentially disrupting proper folding of other proteins required for the cell to function. Because the wtf4 gene encodes both poison and antidote, the antidote is very similar in form and groups together with the poison. However, the antidote has an extra part that appears to isolate the poison-antidote clusters by bringing them to the cell’s garbage can, the vacuole.

To understand how selfish genes function during reproduction, the researchers looked at the beginning of spore formation and found poison protein expressed within all developing spores and the sac surrounding them, while the antidote protein was only seen in low concentration throughout the sac. Later in development, the antidote was enriched inside of the spores that inherited wtf4 from the parent yeast cell.

The researchers found that spores that inherited the driver gene manufactured additional antidote protein inside the spore to neutralize the poison and ensure their survival.

The team also discovered that a particular molecular switch that controls many other genes involved in spore formation also controls the expression of poison, but not antidote, from the wtf4 gene. The switch is essential for yeast reproduction and is inextricably linked to wtf4, helping to explain why this selfish gene is so successful at evading any attempts by the host to disable the switch.

“One of the reasons we are thinking these things have stuck around for so long – they’ve used this sneaky strategy of exploiting the same essential switch that turns on yeast reproduction,” said Nidamangala Srinivasa.

“If we could manipulate these DNA parasites to be expressed in mosquitoes and drive their destruction, it may be a way to control pest species,” said Nuckolls.

About the Stowers Institute for Medical Research

Founded in 1994 through the generosity of Jim Stowers, founder of American Century Investments, and his wife, Virginia, the Stowers Institute for Medical Research is a non-profit, biomedical research organization with a focus on foundational research. Its mission is to expand our understanding of the secrets of life and improve life’s quality through innovative approaches to the causes, treatment, and prevention of diseases.

The Institute consists of 17 independent research programs. Of the approximately 500 members, over 370 are scientific staff that include principal investigators, technology center directors, postdoctoral scientists, graduate students, and technical support staff. Learn more about the Institute at www.stowers.org and about its graduate program at www.stowers.org/gradschool.