Linking genomics to evolution to ecology, the work takes an unusual approach to reveal broad implications of how species adapt to their local environment 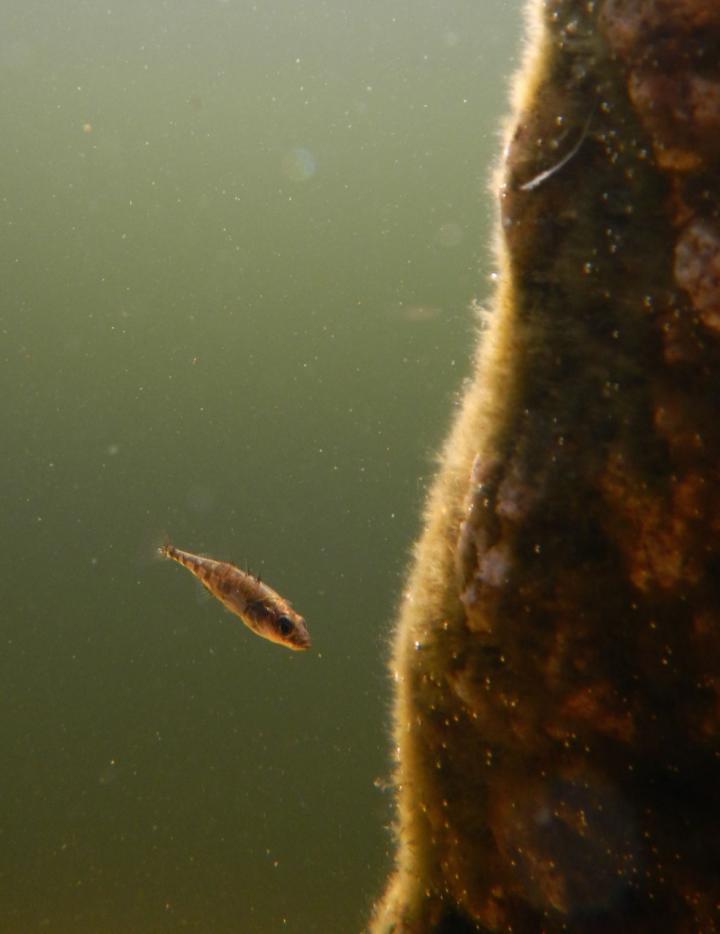 In a remote area of British Columbia’s Vancouver Island, Kennedy Lake’s deep blue waters stretch over 25 square miles. The lake is home to the threespine stickleback, a diminutive fish species that has provided rich fodder for evolutionary study.

These sticklebacks thrive in both marine and freshwater habitats and exist in most of the inland waters that dot the northern coasts of North America, Europe, and Asia. Significant to scientists, the species has a conspicuously variable trait governed by a single gene: the amount of bony plating, or “armoring,” on their bodies.

Variations in this gene in this tiny fish species have the potential to alter the broader aquatic ecosystem, according to new research led by University of Pennsylvania postdoctoral researcher Seth Rudman. Fish with more armoring released more phosphorous into the water around them, the researchers found. Because phosphorous is such a key element in aquatic ecosystems, such a difference may have trickle-down effects on microbes, plants, and algae in freshwater or marine area.

“Genomics has played such a large role in advancing biological research in many, many disciplines and subdisciplines,” says Rudman, the lead author on the work, who completed the investigations with colleagues during his doctoral studies at the University of British Columbia (UBC). “But the thing that I think about most and is the motivation for this study is how do we apply genomics to help us better understand ecosystems? In a way I view this work as a proof-of-concept that there are scenarios in which changes in individual genes can have effects on ecology.”

The team used novel methods to assess how evolution influences the elemental make-up of individual fish, essentially viewing the organisms as a sack of atoms–carbon, calcium, strontium, and the like. What they found indicated that evolution has acted not only to differentiate the elemental composition of marine fish compared to their freshwater counterparts but has also influenced their ability to take up elements from the environment.

“I think the fact that evolution really did affect ion movement for these fish is surprising,” Rudman says of the work, which appears in the journal Ecology Letters.

Generally, sticklebacks in marine waters have more plating, while sticklebacks in freshwater have less. But Kennedy Lake’s stickleback population is unusual in having stable populations of both “low-plated” and “high-plated” fish, traits governed by the Eda gene, making it an ideal site for study.

The finding suggests that the version of the Eda gene a fish possesses influences how it interacts with its surrounding environment, potentially triggering ecosystem-wide effects.

In a second part of the study, Rudman and coauthors looked at fish in other areas of British Columbia, collecting them from either marine environments, where fish tend to be more plated, or freshwater ones associated with low-plating, to look for signs the populations had adapted to their local environment and the ecological implications of those changes. To do so, the researchers examined what the fish were made of chemically.

“I think one of the newer components of this paper is we’re able to think about these organisms as a chemical cocktail,” Rudman says, “and when we do that we’re able to explicitly link changes in them to changes in the way they’re interacting with the environment.”

However the fish also showed signs of adapting to their new environments.

Taken together, the study points to a rare case where scientists have been able to link a genetic difference to a physical trait and then link that trait to a potential ecosystem effect, since other organisms could make use of the elements the fish extrude or take up. Rudman also notes that the findings underscore how quickly evolutionary changes that influence these ecological effects can occur.

“Darwin said that evolution is slow, happening over eons, and ecology is happening today in our backyards,” Rudman says. “But that is not true. Evolution is happening fast in many systems, within a summer for a fruit fly or across a decade for sticklebacks.”

Rapid evolution, a feature of changing conditions like those we see today, will have ecological consequences, he adds, and may one day help scientists predict how species will respond to challenges to come.

“This presents a way in which evolution and ecology could be very tightly coupled in determining the fate of populations and species under future conditions,” Rudman says.

The study was supported by the University of British Columbia and the National Science Foundation (grants 1256867 and 1306452).

An atomic view of the trigger for the heartbeat