How microbial interactions shape our lives 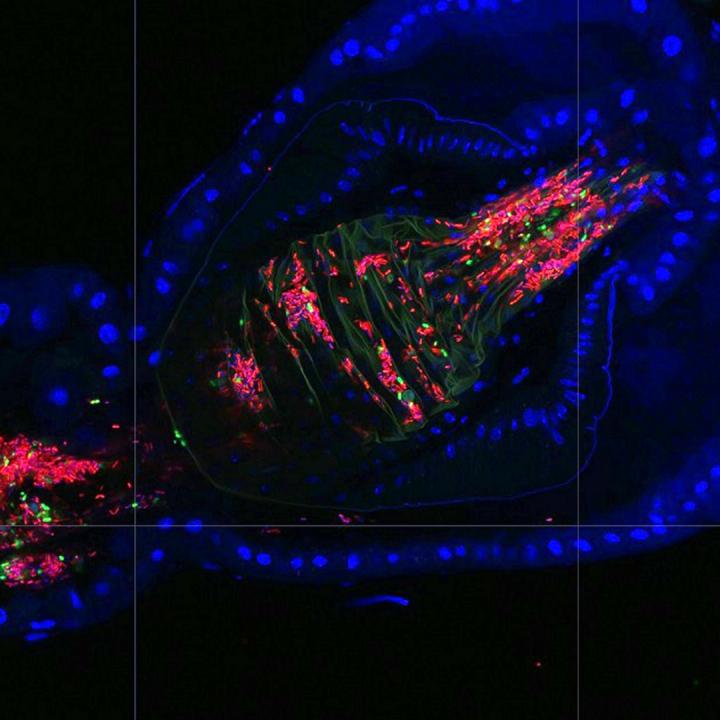 Baltimore, MD–The interactions that take place between the species of microbes living in the gastrointestinal system often have large and unpredicted effects on health, according to new work from a team led by Carnegie’s Will Ludington. Their findings are published this week in the Proceedings of the National Academy of Sciences.

The gut microbiome is an ecosystem of hundreds to thousands of microbial species living within the human body. The sheer diversity within the human gut presents a challenge to cataloging and understanding the effect these communities have on our health.

Biologists are particularly interested in determining whether or not the microbiome as a whole is greater than the sum of its parts. In other words, to what extent do individual species influence our health and physiology, and to what degree are these impacts determined by interactions between the species present in our microbiomes?

Ludington and his team–including molecular biologists Alison Gould, Vivian Zhang, and Benjamin Obadia of University of California Berkeley; physicists Eric Jones and Jean Carlson of University of California Santa Barbara; and mathematicians Lisa Lamberti, Nikolaos Korasidis, and Niko Beerenwinkel of ETH Zurich and Alex Gavryushkin of University of Otago–used the naturally simple microbiome of fruit flies to comprehensively reveal the gut ecosystem. The team found that the interactions between species in the gut microbiome impact fly health and even longevity.

“The classic way we think about bacterial species is in a black-and-white context as agents of disease–either you have it, or you don’t,” Ludington said. “Our work shows that isn’t the case for the microbiome. The effects of a particular species depend on the context of which other species are also present.”

It has long been known from fruit fly studies that populations of gut bacteria can affect their host’s development, fertility, and longevity. In 1927, Helen Steinfeld of UC Berkeley found that by simply removing the gut bacteria from her laboratory’s fruit flies, she could extend their lifespans by 14 percent.

Ludington’s team repeated the experiment and found a similar 23 percent lifespan extension when they removed their flies’ particular microbiomes. But it was unclear to them how much of this influence was due to the individual species that were present and how much was due to their overall microbial ecology.

Ludington and his team built off Steinfeld’s work to dissect the fruit fly gut microbiome and better understand how these microorganisms shape the lives of their insect hosts.

They developed a system for mapping all the possible interactions between the five species of bacteria found in the fly gut in order to see how they affected an insect’s development, production of offspring, and lifespan, which combine to determine its fitness. The analysis of the interactions required developing new mathematical approaches, which are based on the geometry of a five-dimensional cube, where each species is a new dimension.

The team found that the interactions that take place between the microbial populations are as important to the fly’s physiology as which individual species are present. In terms of the 23 percent change in lifespan, individual species can account for only one quarter of the effect, while interactions account for the rest. These interactions are highly influential to some, but not all, of the factors that determine a fly’s likelihood of passing its genetic material on to a new generation.

“As we examined the total of what we call a fly’s fitness–it’s chances of surviving and creating offspring–we found that there was a tradeoff between having a short lifespan with lots of offspring, versus having a long lifespan with few offspring,” Ludington explained. “This tradeoff was mediated by microbiome interactions. That means that if we want to understand how the microbiome impacts our health, we need to develop a predictive understanding of how combinations of bacteria affect the host, not just the individual species.”

Additionally, the measurement and analysis tools developed for this research project demonstrate that the fruit fly is a good model for understanding more complex microbiome interactions in humans and other animals, which will be important for future work.