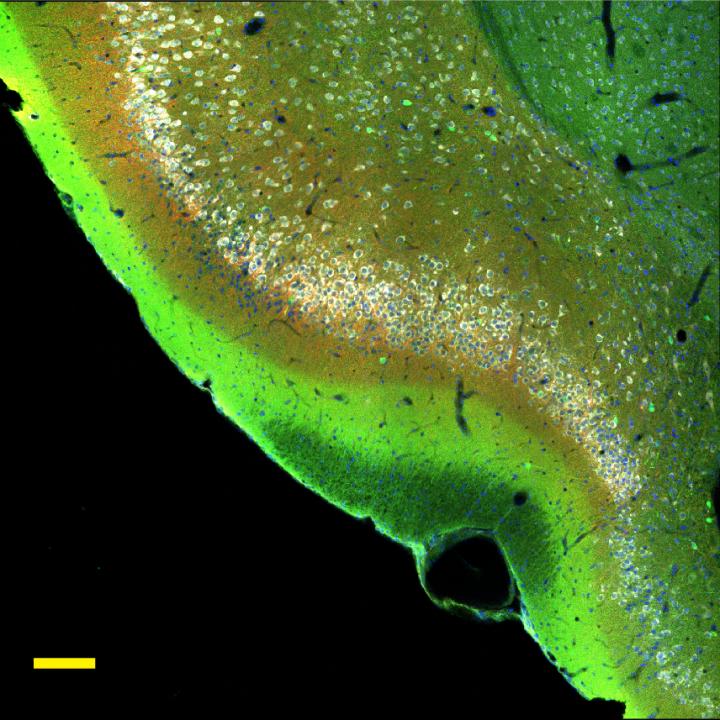 The world is filled with millions upon millions of distinct smells, but how mammals’ brains evolved to tell them apart is something of a mystery.

Now, two neuroscientists from the Salk Institute and UC San Diego have discovered that at least six types of mammals–from mice to cats–distinguish odors in roughly the same way, using circuitry in the brain that’s evolutionarily preserved across species.

“The study yields insights into organizational principles underpinning brain circuitry for olfaction in mammals that may be applied to other parts of the brain and other species,” says Charles Stevens, distinguished professor emeritus in Salk’s Neurobiology Laboratory and coauthor of the research published in the July 18, 2019 issue of Current Biology.

In brief, the study reveals that the size of each of the three components of the neural network for olfaction scales about the same for each species, starting with receptors in the nose that transmit signals to a cluster of neurons in the front of the brain called the olfactory bulb which, in turn, relays the signals to a “higher functioning” region for odor identification called the piriform cortex.

“These three stages scale with each other, with the relationship of the number of neurons in each stage the same across species,” says Shyam Srinivasan, assistant project scientist with UC San Diego’s Kavli Institute for Brain and Mind, and the paper’s coauthor. “So, if you told me the number of neurons in the nose, I could predict the number in the piriform cortex or the bulb.”

The current study builds on research by the same duo, published in 2018, which described how mouse brains process and distinguish odors using what’s known as “distributed circuits.” Unlike the visual system, for example, where information is transmitted in an orderly manner to specific parts of the visual cortex, the researchers discovered that the olfactory system in mice relies on a combination of connections distributed across the piriform cortex.

Following that paper, Stevens and Srinivasan sought to determine if the distributed neural circuitry revealed in mice is similar in other mammals. For the current work, the researchers analyzed mammal brains of varying sizes and types. Their calculations, plus previous studies over the past few years, were used to estimate brain volumes. Stevens and Srinivasan used a variety of microscopy techniques that let them visualize different types of neurons that form synapses (connections) in the olfactory circuitry.

“We couldn’t count every neuron, so we did a survey,” says Srinivasan. “The idea is that you take samples from different represented areas, so any irregularities are caught.”

The new study revealed that the average number of synapses connecting each functional unit of the olfactory bulb (a glomerulus) to neurons in the piriform cortex is invariant across species.

“It was remarkable to see how these were conserved,” says Stevens.

Specifically, identification of individual odors is linked to the strength and combination of firing neurons in the circuit that can be likened to music from a piano whose notes spring from the depression of multiple keys to create chords, or the arrangement of letters that form the words on this page.

“The discrimination of odors is based on the firing rate, the electric pulse that travels down the neuron’s axon,” says Srinivasan. “One odor, say for coffee, may elicit a slow response in a neuron while the same neuron may respond to chocolate at a faster rate.”

This code used for olfaction is different than other parts of the brain.

“We showed that the connectivity parameters and the relationship between different stages of the olfactory circuit are conserved across mammals, suggesting that evolution has used the same design for the circuit across species, but just changed the size to fit the animals’ environmental niche,” says Stevens.

In the future, Stevens plans to examine other regions of the brain in search of other distributed circuits whose function is based on similar coding found in this study.

Srinivasan says he will focus on how noise or variability in odor coding determines the balance between discrimination and learning, explaining that the variability the duo is finding in their work might be a mechanism for distinguishing odors, which could be applied to making better machine learning or AI systems.

This research was supported by the Kavli Institute for Brain and Mind at UC San Diego and the National Science Foundation (NSF-1444273). Theory and modeling were performed with the assistance of Jorge Aldana and Terrence Sejnowski of Salk’s Computational Neurobiology Laboratory.

Depression common during perimenopause but not regularly assessed by providers

Temperatures of 800 billion degrees in the cosmic kitchen