How is a metal formed? 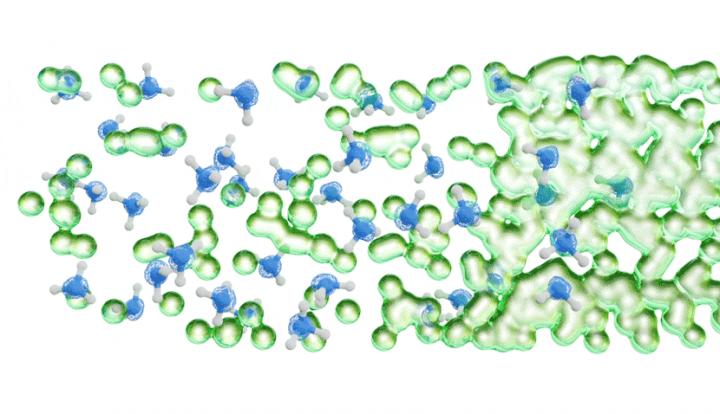 What does it mean to be a metal and how is a metal formed? These seem like textbook questions with a simple answer: Metal is characterized by free electrons which give rise to its high electric conductivity. But how exactly is a metallic conduction band formed from originally localized electrons and what is the corresponding microscopic picture for the material involved?

In collaboration involving scientists from the Czech Republic, USA, and Germany, the research team of Pavel Jungwirth from the Institute of Organic Chemistry and Biochemistry of the Czech Academy of Sciences (IOCB Prague) has succeeded in mapping at the molecular level the electrolyte-to-metal transition in alkali metal – liquid ammonia solutions using a combination of photoelectron spectroscopy (PES) and electronic structure calculations. The results of their research were recently published as a Research Article in Science, one of the most prestigious scientific journals in the world, which also selected the study for cover image.

Alkali metals dissolved in liquid ammonia represent archetypal systems to explore the transition from blue electrolytes at low concentrations to bronze or gold colored metallic solutions (with conductivity comparable to a copper wire) with higher concentrations of excess electrons. At the same time, PES represents an ideal tool for establishing the electronic structure pertinent to this transition. As an ultra-high vacuum technique, PES was long thought to be incompatible with volatile liquids until the technique of liquid microjets was developed for water and aqueous solutions. However, it was only in 2019 that the group of Pavel Jungwirth in collaboration with colleagues at the University of Southern California and at the BESSY II synchrotron in Berlin performed first successful PES measurements on a refrigerated polar liquid – pure liquid ammonia.

“This is what happens when you give a theory group a bit of lab space to play,” says Pavel Jungwirth of the decision of the Institute’s director to grant him a small laboratory.

This achievement opened the door to PES studies of alkali metal – liquid ammonia systems (as reported in the present paper in Science), which map the electrolyte-to-metal transition for lithium, sodium, and potassium dissolved in liquid ammonia by means of PES using soft X-ray synchrotron radiation. In this way, researchers captured for the first time the photoelectron signal of excess electrons in liquid ammonia as a peak at around 2 eV binding energy. This peak then broadens asymmetrically toward higher binding energies upon increasing the alkali metal concentration, gradually forming a conduction band with a sharp Fermi edge accompanied by plasmon peaks, both of which being fingerprints of the nascent metallic behavior.

Together with state-of-the-art electronic structure calculations, these measurements provide a detailed molecular picture of the transition from a non-metal to a metal, allowing us to better understand the onset of metallic behavior characterized by properties such as the very large electric conductivity.

“Hopefully the present work on metallic ammonia will open the path to realizing our most ‘explosive’ idea: The preparation of metallic water by very carefully mixing it with alkali metals,” concludes Pavel Jungwirth.

Professor Pavel Jungwirth, DSc. (b. 1966, Prague) is a Czech physical chemist, educator, and popularizer of science. He studied physics in Prague at Charles University, Faculty of Mathematics and Physics, where he specialized in chemical physics. He received his Candidate of Sciences degree from the J. Heyrovský Institute of Physical Chemistry of the Czech Academy of Sciences for his work in computational chemistry under the guidance of Professor R. Zahradník. He has spent several years at the University of California, Irvine, the University of Southern California in Los Angeles, and the Hebrew University of Jerusalem.

Currently, Pavel Jungwirth heads a research team at the Institute of Organic Chemistry and Biochemistry of the Czech Academy of Sciences. He is also an external member of the Department of Chemical Physics and Optics at the Charles University Faculty of Mathematics and Physics.

Pavel Jungwirth has published more than 300 original papers in international journals, including Science, Nature Chemistry, and PNAS, with over 14,000 citations. He is a senior editor of the Journal of Physical Chemistry, which is published by the American Chemical Society. He is also the president of the Learned Society of the Czech Republic and has received numerous awards, among them the Spiers Memorial Prize of the British Royal Society of Chemistry and the Jaroslav Heyrovský Honorary Medal for Merit in the Chemical Sciences from the Czech Academy of Sciences. Pavel Jungwirth’s popular-science contributions regularly appear on the pages of the weekly Respekt, and he is a frequent Czech Radio and television guest.

The Institute of Organic Chemistry and Biochemistry of the Czech Academy of Sciences / IOCB Prague is a leading internationally recognized scientific institution whose primary mission is the pursuit of basic research in chemical biology and medicinal chemistry, organic and materials chemistry, chemistry of natural substances, biochemistry and molecular biology, physical chemistry, theoretical chemistry, and analytical chemistry. An integral part of the IOCB Prague’s mission is the implementation of the results of basic research in practice. Emphasis on interdisciplinary research gives rise to a wide range of applications in medicine, pharmacy, and other fields.