Hovering over a target helps giant-faced Great Gray owls pinpoint prey hidden beneath as much as two feet of snow. 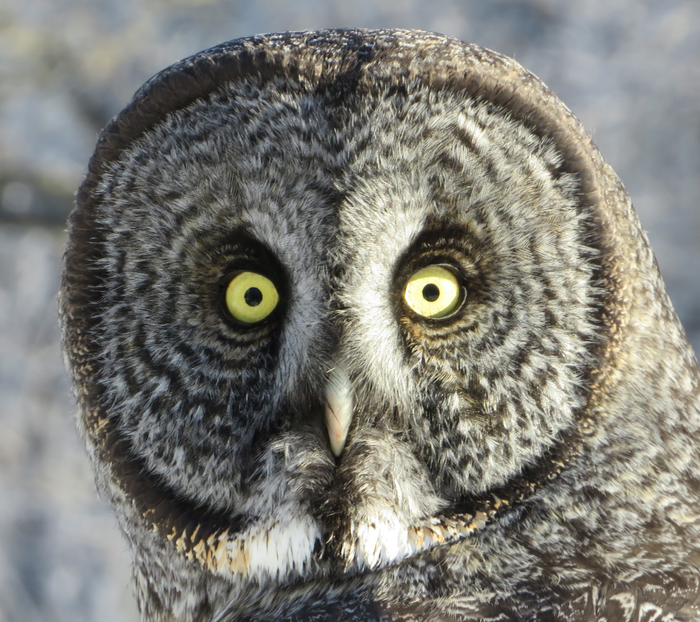 Hovering over a target helps giant-faced Great Gray owls pinpoint prey hidden beneath as much as two feet of snow.

Several of the owls’ physical features, especially parts of their wings and face, help them correct for sonic distortions caused by the snow, enabling them to find their moving food with astonishing accuracy, according to a new UC Riverside study.

While most owls fly straight at their prey, this species hovers just above a target area before dropping straight down and punching through the snow with its talons.

“These aren’t the only birds to hunt this way, but in some ways, they are the most extreme because they can locate prey so far beneath the snow cover,” said UC Riverside biologist Christopher Clark, who led the study. “This species is THE snow hunting specialist.”

Clark and his team conducted a series of experiments in the forests of Manitoba, Canada, this year to better understand the owls’ precision despite snow-limited visibility and sounds. Their observations are documented in a new Proceedings of the Royal Society B paper.

A key finding relates to the owls’ broad disc-like face, which they use like radar to find food. The fleshy part of our ears works the way their facial features do. An opening under their feathers funnels sound toward their ears, which are located near the center of their faces.

“It’s similar to the way a dog can turn its ears to tune sound. Owls can do the same thing,” Clark said.

Bigger facial discs are more sensitive to low-frequency sounds. With the largest facial disc of any bird, great gray owls are built for hunting voles, their preferred food. Often mistaken for mice, voles have high-pitched voices that get lost under snow cover. However, their digging and chewing sounds beam straight onto the owls’ facial radar.

To demonstrate how snow affects the voles’ sound, the researchers dug holes next to the ones they watched the owls create while hunting. Inside these holes, they placed speakers playing a variety of sounds; white-noise, which is high-frequency, as well as recordings of burrowing voles, which are low frequency.

Sounds emerging from the snowpack from six different depths were captured by an acoustic camera composed of multiple microphones. Analysis revealed that low-frequency noises transmitted best. Only sounds of 3 kilohertz or lower transmitted through 20-inch-thick layers of snow; all high frequency sounds disappeared.

“The fact that low frequency sound passes through snow explains the facial disc of this species, because they have better low frequency hearing with such a big disc.”

The group’s sonic experiments also demonstrated that snow bends the voles’ sounds, creating an “acoustic mirage,” which could lead owls astray. By spending a moment directly above their prey, the birds correct for the snow’s distortions.

“The distance the sound has to travel from just overhead is shorter, and there’s less snow for the sound to travel through from that spot,” Clark said. “This definitely helps the owls land where they need to.”

Great gray owls also have wings that appear to dampen the sound of flying, which may allow them to concentrate on the noises coming from the voles. Among all owls, this species is among the quietest in flight, owing to long, fringed wings coated in thick “velvet.” The sound-dampening qualities of these wings may be particularly useful during the hovering phase of the hunt.

This last aspect of the work is of interest not only to those fascinated by owls, but also to those developing quieter machines.

“Between the 1940s and 60s, airplane sounds dropped dramatically, but since then planes haven’t gotten much quieter. Studying how these owls’ wings function could help inspire new planes and drones that create less noise,” Clark said.