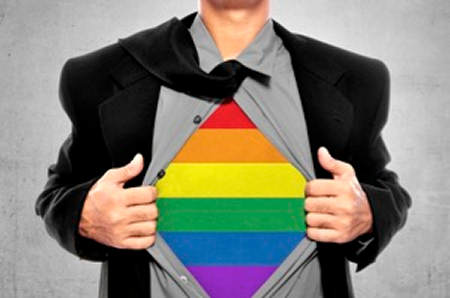 Recent sociology research at the University of Cincinnati looked closely at the various strategies gay men use to manage both their gendered and sexual identities in the workplace.

Travis Dean Speice, a new sociology doctoral graduate at the University of Cincinnati, says his research indicates that gay men often feel they have to change certain distinct gestures and body language behaviors in order to avoid potential negative consequences from co-workers.

In his study, Speice conducted in-depth interviews of men between the ages of 22-52 who identify as gay, analyzing their thoughts on masculinity, femininity, gayness, how they came out and their specific job descriptions, which he says is where a lot of conscious manipulation of identity management happens.

“Although there is no hard, fast rule for general masculinity, there are lots of anxieties related to identity management and self-presentation for gay men in many professional settings,” says Travis Dean Speice, recent sociology doctoral graduate at the University of Cincinnati. “From the initial interview to moving up the ladder at work, if a gay man feels his supervisors don’t agree with a gay population, he may not want to reveal his sexuality to them.

“Instead, he may test the waters with a variety of strategies, including managing the way he dresses, the way he talks and whether or not he decides to disclose his sexuality to the people at work.”

Speice explains these strategies for avoiding scrutiny using a concept he termed “hegemonic sexuality” — a tool he uses to understand how gay men are positioned hierarchically within society — where some men are labeled “too gay,” while others are more acceptable. Speice says his respondents refer to the label “too gay” as various speech patterns, body language and clothing choices they feel do not fit into an idealized form of hegemonic masculinity, or other commonly known masculine behaviors.

Instead, these characteristics often follow common stereotypes of gay men. Men then have the choice to perform masculinity and gayness in any number of ways, with some men attempting to perform a more traditional masculine version of themselves at work.

“This happens when they don’t feel safe being themselves around certain supervisors or co-workers,” says Speice. “While many gay men have careers where they are respected and accepted for being themselves, several others feel that they have to hide, modify or conceal their behavioral characteristics and speak, act and dress more “professionally.”

But he posits that “professionally” is often a subconscious euphemism for behaving more masculine.”

Speice presented the analysis of these strategies in August titled “(Gay) Men at Work: Understanding Gendered and Sexual Identity Management Strategies in the Workplace,” in Seattle at the annual meeting of the American Sociological Association Section on the Sociology of Sexualities.

Throughout the study, Speice uncovers a unique subconscious component to his respondents’ strategies for how they manage their identity, including what they wear.

“One man, a social worker, felt proud wearing his burnt orange khakis to work one morning until he had to visit the corrections institute later that day and noticed the inmates staring at him,” says Speice. “The color of his clothes was significant in his perception of his own masculinity and gay identity, but later became too flamboyant in the face of scrutiny.

“He became insecure and felt that because the color of his pants indicated something about his sexuality, the inmates had suddenly gained a sliver of power over him.”

Many respondents, he points out, believe particular colors or patterns on clothing might be interpreted by others as being “too gay,” or “not masculine enough.” This is important, Speice says, for how it changes the way gay men feel about presenting their gender and sexuality, especially in the workplace.

“Some men, however, claimed that their choice of clothing had nothing to do with dressing masculine, but instead wore certain items to look professional,” says Speice. “But I found that when gay men feel pressured to conform to ‘professional’ gender norms, they often use the guise of “professional” as a façade for how hegemonic sexuality operates in their day-to-day lives.”

Communication and language characteristics such as the “gay lisp,” as well as the inflection and speed, pitch and rhythm of speech are all critical strategies that Speice says gay men may have to manage in order to conceal or reveal their sexuality.

“One man who typically uses wild hand gestures rationalized ‘butching up’ his behavior by toning down his gestures in some contexts,” Speice says. “He felt it was less of a masculine/feminine thing and more of an intimidation issue where he doesn’t always get to be relaxed in his personality at work — there’s a persona that has to change.”

To Disclose or Not to Disclose

In the study, reasons for “coming out” at work were varied, but Speice says most of the respondents had a strong desire to present their authentic self in front of others. The men claimed coming out helped blur the lines between the front and back stages of their lives and they found comfort in presenting a more genuine identity.

“One of the most common strategies the men used was to ‘test the waters’ at work, ” says Speice. “For instance, some men would casually mention to their co-workers the name of a gay bar they had gone to recently. If co-workers reacted favorably or with no negative affect this helped ease the process of ‘coming out.'”

Of course, the strongest reason for hesitating remained the ever-present fear of experiencing the discrimination from co-workers, bosses and clients that still exists in some workplaces, Speice adds.

In looking at ways that power structures operate within the gay community, Speice developed his concept of hegemonic sexuality, capturing how gay men manipulate their performances of sexuality, within this hierarchical structure that guides their behaviors.

Ultimately, he finds that most gay men “manage” their gendered and sexual identities simultaneously. And while some strategies are directed at managing the identities separately, Speice says others are used simultaneously to be seen as both masculine and professional in the workplace.

“Sometimes the strategies are so intertwined that the participants themselves do not realize that their efforts to manage sexuality are also managing gender,” says Speice. “Whether they are conscious or unconscious, these strategies reinforce and perpetuate both idealized forms of hegemonic masculinity and hegemonic sexuality, indicating that some behavior strategies for ‘being gay’ are more desirable and rewarded than other ways.”