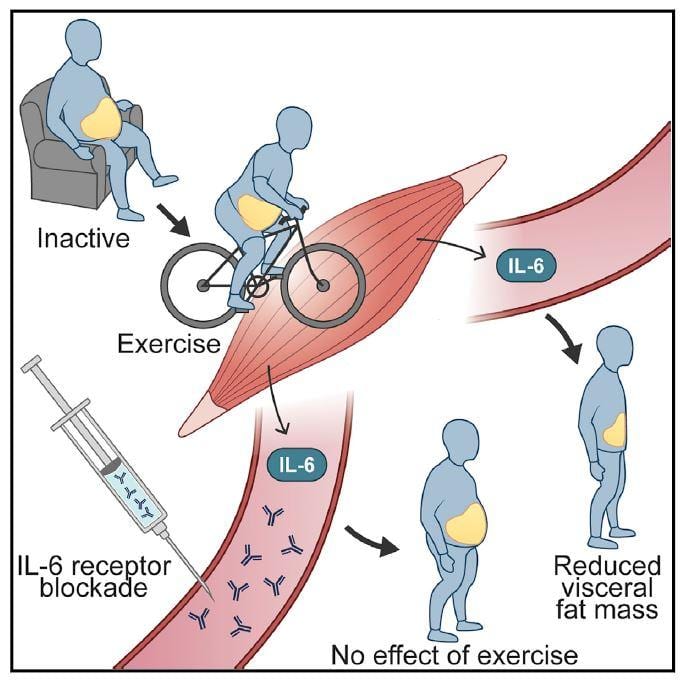 Some of you may have made a New Year’s resolution to hit the gym to tackle that annoying belly fat. But have you ever wondered how physical activity produces this desired effect? A signaling molecule called interleukin-6 plays a critical role in this process, researchers report December 27 in the journal Cell Metabolism.

As expected, a 12-week intervention consisting of bicycle exercise decreased visceral abdominal fat in obese adults. But remarkably, this effect was abolished in participants who were also treated with tocilizumab, a drug that blocks interleukin-6 signaling and is currently approved for the treatment of rheumatoid arthritis. Moreover, tocilizumab treatment increased cholesterol levels regardless of physical activity.

“The take home for the general audience is ‘do exercise,'” says first author Anne-Sophie Wedell-Neergaard of the University of Copenhagen. “We all know that exercise promotes better health, and now we also know that regular exercise training reduces abdominal fat mass and thereby potentially also the risk of developing cardio-metabolic diseases.”

Abdominal fat is associated with an increased risk of not only cardio-metabolic disease, but also cancer, dementia, and all-cause mortality. Physical activity reduces visceral fat tissue, which surrounds internal organs in the abdominal cavity, but the underlying mechanisms have not been clear. Some researchers have proposed that a “fight-or-flight” hormone called epinephrine mediates this effect. But Wedell-Neergaard and co-senior study author Helga Ellingsgaard of the University of Copenhagen suspected that interleukin-6 could also play an important role because it regulates energy metabolism, stimulates the breakdown of fats in healthy people, and is released from skeletal muscle during exercise.

To test this idea, the researchers carried out a 12-week, single-center trial in which they randomly assigned abdominally obese adults to four groups. A total of 53 participants received intravenous infusions of either tocilizumab or saline as a placebo every four weeks, combined with no exercise or a bicycle routine consisting of several 45-minute sessions each week. The researchers used magnetic resonance imaging to assess visceral fat tissue mass at the beginning and end of the study.

In the placebo groups, exercise reduced visceral fat tissue mass by an average of 225 grams, or 8 percent, compared with no exercise. But tocilizumab treatment eliminated this effect. In the exercise groups, tocilizumab also increased visceral fat tissue mass by approximately 278 grams compared with placebo. In addition, tocilizumab increased total cholesterol and “bad” low-density-lipoprotein (LDL) cholesterol compared with placebo, in both the exercise and no-exercise groups. “To our knowledge, this is the first study to show that interleukin-6 has a physiological role in regulating visceral fat mass in humans,” Wedell-Neergaard says.

The authors note that the study was exploratory and not intended to evaluate a given treatment in a clinical setting. To complicate matters, interleukin-6 can have seemingly opposite effects on inflammation, depending on the context. For example, chronic low-grade elevations of interleukin-6 are seen in patients with severe obesity, type 2 diabetes, and cardiovascular disease. “The signaling pathways in immune cells versus muscle cells differ substantially, resulting in pro-inflammatory and anti-inflammatory actions, so interleukin-6 may act differently in healthy and diseased people,” Wedell-Neergaard explains.

In future studies, the researchers will test the possibility that interleukin-6 affects whether fats or carbohydrates are used to generate energy under various conditions. They will also investigate whether more interleukin-6, potentially given as an injection, reduces visceral fat mass on its own. “We need a more in-depth understanding of this role of interleukin-6 in order to discuss its implications,” Wedell-Neergaard says.

In the meantime, the authors have some practical holiday exercise tips. “It is important to stress that when you start exercising, you may increase body weight due to increased muscle mass,” Wedell-Neergaard says. “So, in addition to measuring your overall body weight, it would be useful, and maybe more important, to measure waist circumference to keep track of the loss of visceral fat mass and to stay motivated.”

This study was funded by TrygFonden.

Opioid use and misuse following treatment for head and neck cancer