How does a crustacean become a crab? 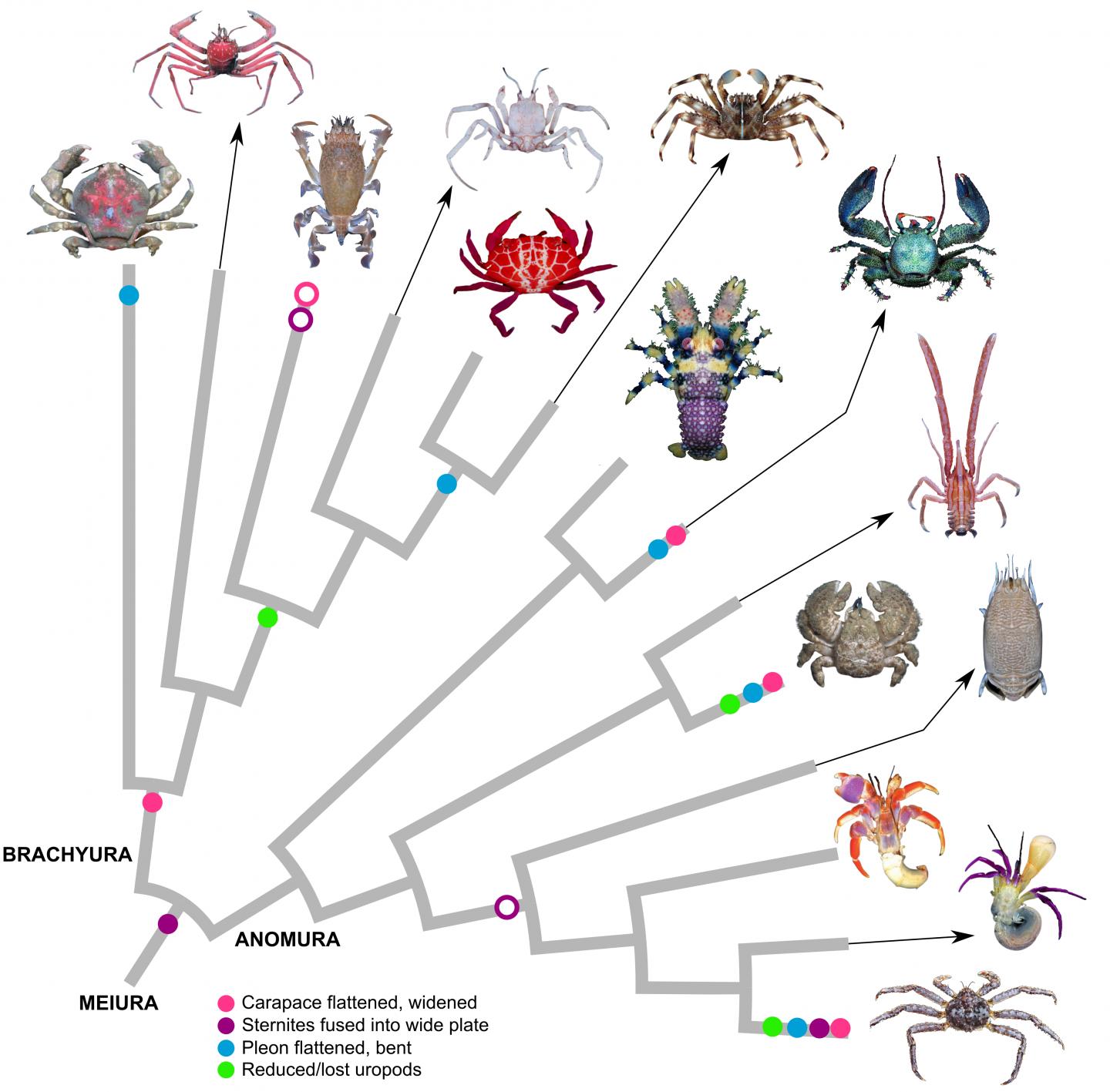 Crabs are living the meme life on social media lately. The memes joke that everything will eventually look like a crab. But it’s actually based in some truth.

The crab shape has evolved so many times the evolutionary biologist L.A. Borradaile coined the term carcinization in 1916 to describe the convergent evolution process in which a crustacean evolves into a crab-like form from a non-crab-like form. Crabs are decapod crustaceans of the infraorder Brachyura and are considered “true crabs”, most of which are carcinized. “False crabs” are of the infraorder Anomura. This group evolved crab-like body plans three or more times from an ancestor that was not carcinized.

The team, led by first author Joanna M. Wolfe, Postdoctoral Researcher, Department of Organismic and Evolutionary Biology (OEB), Harvard University, examined a composite of phylogenetic data for crabs. They synthesized morphological data from key fossil and living crab groups as well as data from behavior, natural history, functional morphology, and development all from previous studies by the authors.

Construction of comprehensive datasets, including fossil and extant species, representing all crab families is crucial to identifying the key characters that define what is a crab,” said Wolfe. “This will allow us to resolve the multiple origins and losses of ‘crab’ body forms through time and identify the timing of origin of key evolutionary novelties and body plans.”

Carcinization is characterized by a wide, flat carapace (the hard upper shell) and a folded pleon (the abdomen or tail). The pleon is largely hidden under the crab body, unlike the pleon of the lobster which is visible. In decarcinization the carapace is elongated and narrow. The pleon is not bent and is usually visible or even elongated. Decarcinization is an example of a group re-evolving a morphology that had been lost, which is thought to be a rare event in evolution.

“Biologists want to know how to “predict” if a phenotype, or morphology, would evolve in a group,” said senior author Heather D. Bracken-Grissom, Associate Professor, Florida International University. “Examining crab evolution provides a macroevolutionary timescale of 250 million years ago for which, with enough phylogenetic and genomic data, we might be able to predict the morphology that would result.”

Wolfe agreed, “Carcinization also allows us to compare convergent evolution in fossil morphology to that in living organisms, which is not yet commonly done.”

The researchers are not completely certain but posit it is likely the common ancestor of Brachyura and Anomura was not carcinized. “This evidence suggests that indeed carcinization evolved independently in those groups,” said co-author Javier Luque, Postdoctoral Researcher, OEB, Harvard University and Smithsonian Tropical Research Institute.

Wolfe is currently working with Assistant Professor Javier Ortega-Hernández, OEB, Harvard University, to test the hypothesis that carcinization can be quantitatively characterized by measuring the shapes of extant crab specimens from the Museum of Comparative Zoology, Harvard University, collections.