How do you forecast eruptions at volcanoes that sit ‘on the cusp’ for decades?

Persistently restless volcanoes remain right on the cusp of eruption for years or even decades. A research team is figuring out how to forecast them. 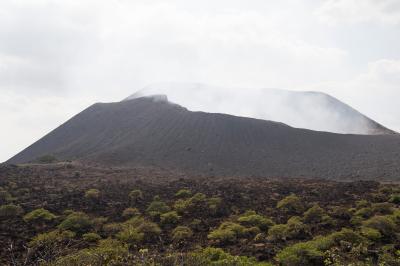 Washington, DC–Some volcanoes take their time–experiencing protracted, years-long periods of unrest before eventually erupting. This makes it difficult to forecast when they pose a danger to their surrounding areas, but Carnegie’s Diana Roman and Penn State’s Peter LaFemina are trying to change that.

“Dormancy, brief unrest, eruption–this is a familiar pattern for many volcanoes, and for many parents,” joked Roman. “But for some volcanoes the unrest is anything but brief–potentially lasting for decades.'”

It turns out that these so-called “persistently restless volcanoes” experience three different states of unrest, some of which are more likely to result in explosive eruptions than others, according to Roman and LaFemina’s 10-year research project on the Telica Volcano in Nicaragua. Their latest results are published by Geochemistry, Geophysics, Geosystems.

“Persistently restless volcanoes remain right on the cusp of being about to erupt, periodically tipping into outright eruption,” explained lead author Roman.

She, LaFemina and an international group of collaborators found that Telica experienced three states of unrest during the decade of their observations–two of which may lead to eruptions.

The first is accompanied by relatively steady release of gas as well as changes in seismic activity. In this state, gas can move easily through and out of the system of cracks and reservoirs underlying the volcano, avoiding pressure accumulations that lead to explosions. But sometimes one of these channels gets sealed off, blocking the release of gas. The second and third states are defined by the strength of the blockage.

The second state is characterized by a series of weak explosions until one comes along that is strong enough to remove the obstruction. However, if the explosions only partially remove the blockage, it can lead to the third, destabilized state, in which pressure rapidly accumulates, driving deformation of the surrounding landscape and large explosions that include ejection of rock fragments. Roman and LaFemina believe that the 2011 eruption of Telica is an example of the former and the 2015 eruption is an example of the latter.

“Over the course of our decade of monitoring Telica, we observed all three of our proposed states of unrest,” LaFemina noted. “This reinforces the importance of continuous surveillance efforts.”

This work was supported by the National Science Foundation, NASA, the EC FP6 Programme, the DECADE/DCO project, and INETER.

Data was obtained though the Committee on Earth Observation Satellites (CEOS) Volcano pilot project and working group and the German Aerospace Center. This material is based on services provided by the UNAVCO Facility with support from NSF and NASA. This work was also conducted as part of the “Optimizing satellite resources for the global assessment and mitigation of volcanic hazards” Working Group supported by the John Wesley Powell Center for Analysis and Synthesis, funded by the U.S. Geological Survey.

Species may disappear faster than anticipated, according to new data…