How do galaxies evolve? A UMass Amherst undergrad may have provided the missing link

AMHERST, Mass. – A University of Massachusetts Amherst undergraduate student has contributed significant work regarding the growth of stars and black holes, providing key insight into how they are linked. This new information will allow the James Webb Space Telescope (JWST) to more efficiently untangle how, exactly, galaxies work. 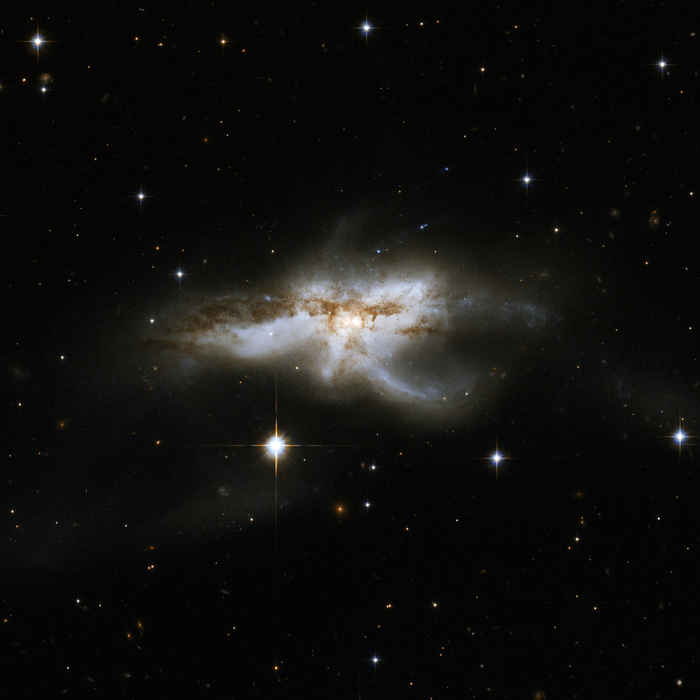 Credit: NASA, ESA, the Hubble Heritage-Hubble Collaboration, and A. Evans.

AMHERST, Mass. – A University of Massachusetts Amherst undergraduate student has contributed significant work regarding the growth of stars and black holes, providing key insight into how they are linked. This new information will allow the James Webb Space Telescope (JWST) to more efficiently untangle how, exactly, galaxies work.

Astronomers know that the evolution of galaxies is powered by two processes: the growth of supermassive black holes at each galaxy’s center and the formation of new stars. How these processes are related has remained a mystery and is one of the questions that the recently launched James Webb Space Telescope (JWST) will be exploring. Work by Meredith Stone, who graduated from UMass Amherst’s astronomy program in May, 2022, will help scientists better understand how they are linked.

“We know that galaxies grow, collide and change throughout their lives,” says Stone, who completed this research under the direction of Alexandra Pope, professor of astronomy at the University of Massachusetts Amherst and senior author of a new paper, recently published in The Astrophysical Journal. “And we know that black hole growth and star formation play crucial roles. We think that the two are linked and that they regulate each other, but until now, it’s been very hard to see exactly how

Part of the reason that it has been difficult to study the interaction between black holes and stars is that we can’t really see these interactions because they take place behind enormous clouds of galactic dust. “For galaxies that are actively forming stars, more than 90% of the visible light can be absorbed by dust,” says Pope, “and this dust absorbs visible light.”

However, there’s a workaround: when the dust absorbs visible light, it heats up, and though the naked human eye can’t see heat, infrared telescopes can. “We used the Spitzer Space Telescope,” says Stone, who will begin her graduate studies in astronomy at the University of Arizona this fall, “collected during the Great Observatories All-sky LIRG Survey (GOALS) campaign, to look at the mid-infrared wavelength range of some of the brightest galaxies that are relatively close to Earth.” In particular, Stone and her co-authors were looking for particular tell-tale tracers that are the fingerprints of black holes and stars in the midst of formation.

The difficulty is that these fingerprints are exceedingly faint and nearly impossible to distinguish from the general noise of the infrared spectrum. “What Meredith did,” says Pope, “is to calibrate the measurements of these tracers so that they are more distinct.”

Once the team had these more distinct observations in hand, they could see that, in fact, black hole growth and star formation are happening concurrently in the same galaxies and they do seem to be influencing each other. Stone was even able to calculate the ratio that describes how the two phenomena are linked.

Not only is this an exciting scientific achievement on its own, Stone’s work can be taken up by the JWST, with its unprecedented access to the mid-infrared spectrum light, and used to zero in much more closely on the questions that remain. For though Stone and her co-authors, including UMass Amherst astronomy graduate student Jed McKinney, quantified how black holes and stars are linked in the same galaxy, why they’re linked remains a mystery.