How do blind cavefish survive their low-oxygen environment?

Cavefish have obvious adaptations such as missing eyes and pale colors that demonstrate how they evolved over millennia in a dark, subterranean world. 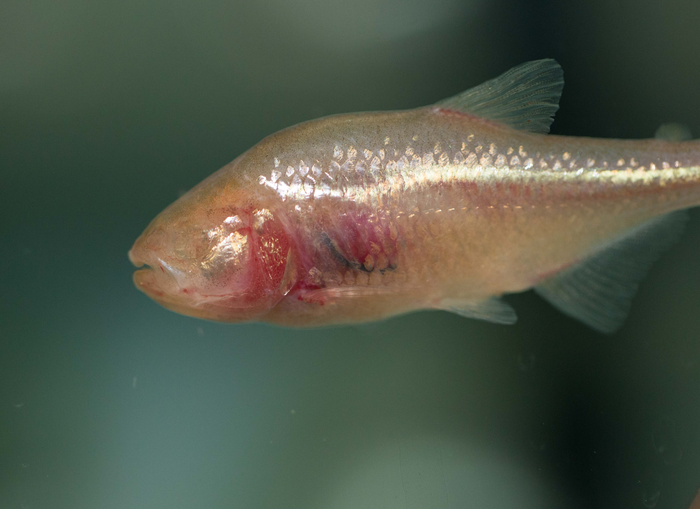 Cavefish have obvious adaptations such as missing eyes and pale colors that demonstrate how they evolved over millennia in a dark, subterranean world.

Now researchers at the University of Cincinnati say these incredible fish have an equally remarkable physiology that helps them cope with a low-oxygen environment that would kill other species.

Biologists in UC’s College of Arts and Sciences found that Mexican cavefish produce more hemoglobin through red blood cells that are much larger compared to those of surface-dwelling fish. Hemoglobin helps the body transport oxygen and carbon dioxide between a fish’s cells and organs and its gills.

The study was published in the Nature journal Scientific Reports. It demonstrates how much more there is to learn about animals that have intrigued biologists for 200 years.

“I’ve been fascinated by these fish for a long time,” UC associate professor Joshua Gross said.

Cavefish evolved in caverns around the world. The species UC biologists examined, Astyanax mexicanus, diverged as recently as 20,000 years ago from surface fish still found in nearby streams in Sierra de El Abra, Mexico.

Cavefish are pale pink and nearly translucent compared to their silvery counterparts on the surface. While cavefish have the faintest outline of vestigial eye sockets, the surface tetras have enormous round eyes that give them a perpetually surprised expression.

Despite their many obvious physical differences, the two fish are considered by many to be members of the same species, Gross said.

“Unlike Charles Darwin’s finches in the Galapagos that are separated at the species level, both the cavefish and surface fish are considered members of the same species and can interbreed,” he said.

That makes them a good model system for biologists to study evolutionary and genetic adaptations, Gross said.

For the latest study, Gross and UC biology students Jessica Friedman and Tyler Boggs, the study’s lead author, examined hemoglobin in cavefish blood to see if it might explain how they survive the low-oxygen environment of deep underground caves. The UC study examined cavefish from three populations in Mexican caves called Chica, Tinaja and Pachón.

While fast-moving surface streams are saturated with oxygen, cavefish live in deep caverns where standing water lies undisturbed for long periods. Studies have found that some of these standing pools have far less dissolved oxygen than surface waters.

“They move around all the time, but they have little access to nutrition,” Boggs said. “It’s a paradox. They’re expending all this energy. Where does it come from?”

Blood samples revealed that cavefish have more hemoglobin than surface fish. UC researchers assumed that cavefish must have a higher hematocrit — a clinical measure of the relative contribution of red blood cells in whole blood.

These researchers expected to find more red blood cells in cavefish, “But they were virtually the same,” Gross said. “We couldn’t figure out what was going on.”

UC biologists examined the red blood cells of both fish and found that those of cavefish are much larger by comparison.

“That size difference largely explains the differences in hematocrit,” Gross said. “We know very little about the mechanism of cell size in evolution, so this finding is something we could capitalize on to gain insight into how animals evolve elevated hemoglobin capacity.”

Gross said the elevated hemoglobin might allow cavefish to forage longer in the low-oxygen environment. Cavefish often have to work harder to find limited food available in the caves.

Boggs said scientists are very interested in how fish draw oxygen from the water. Because of climate change and human development, marine systems are seeing more ecological disasters such as red tides, algae blooms that create low-oxygen environments that often lead to massive fish kills.