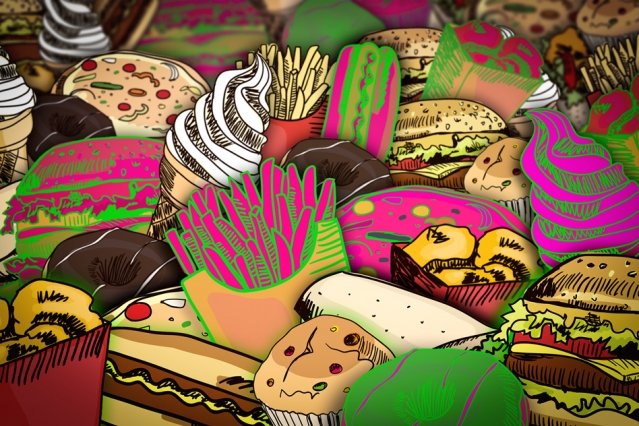 Over the past decade, studies have found that obesity and eating a high-fat, high-calorie diet are significant risk factors for many types of cancer. Now, a new study from MIT reveals how a high-fat diet makes the cells of the intestinal lining more likely to become cancerous.

The study of mice suggests that a high-fat diet drives a population boom of intestinal stem cells and also generates a pool of other cells that behave like stem cells — that is, they can reproduce themselves indefinitely and differentiate into other cell types. These stem cells and “stem-like” cells are more likely to give rise to intestinal tumors, says Omer Yilmaz, an MIT assistant professor of biology and leader of the research team.

“Not only does the high-fat diet change the biology of stem cells, it also changes the biology of non-stem-cell populations, which collectively leads to an increase in tumor formation,” says Yilmaz, who is a member of MIT’s Koch Institute for Integrative Cancer Research and a gastrointestinal pathologist at Massachusetts General Hospital.

“Under a high-fat diet, these non-stem cells acquire the properties of stem cells so that when they are transformed they become tumorigenic,” says David Sabatini, an MIT professor of biology, member of the Whitehead Institute, and investigator with the Howard Hughes Medical Institute.

Sabatini and Yilmaz, who previously collaborated on research into the effects of caloric restriction on stem cell potential in the intestine, are the senior authors of the study, which appears in Nature on March 2. The paper’s lead authors are Semir Beyaz, a Harvard University graduate student affiliated with the Koch Institute and Dana-Farber/Boston Children’s Cancer and Blood Disorders Center; MIT postdoc Miyeko Mana; and Tufts Medical Center gastroenterologist and visiting scientist Jatin Roper.

People who are obese have a greater risk of developing colorectal cancer, according to previous studies. Yilmaz’ lab, which studies the relationship between diet and cancer, set out to uncover the cellular mechanisms underpinning the enhanced risk of colon cancer.

“We wanted to understand how a long-term high-fat diet influences the biology of stem cells, and how such diet-induced changes that occur in stem cells impact tumor initiation in the intestine,” Yilmaz says.

Recent studies have shown that intestinal stem cells, which last a lifetime, are the cells most likely to accumulate the mutations that give rise to colon cancer. These stem cells live in the lining of the intestine, known as the epithelium, and generate all of the different cell types that make up the epithelium.

To investigate a possible link between these stem cells and obesity-linked cancer, Yilmaz and colleagues fed healthy mice a diet made up of 60 percent fat for nine to 12 months. This diet, Yilmaz noted, is much higher in fat than the typical American diet, which is usually about 20 to 40 percent fat.

During this period, the mice on the high-fat diet gained 30 to 50 percent more body mass than mice fed a normal diet, and they developed more intestinal tumors than mice on a normal diet.

“You have more stem cells and they’re able to operate independent of inputs coming from their microenvironment,” Yilmaz says.

The researchers also found that another population known as progenitor cells — differentiated daughter cells of stem cells — started to behave like stem cells: They began to live much longer than their usual lifespan of a few days, and they could also generate mini-intestines when grown outside of the body.

The researchers also identified a nutrient-sensing pathway that is hyperactivated by the high-fat diet. The fatty acid sensor known as PPAR-delta responds to high levels of fat by turning on a metabolic process that enables cells to burn fat as an energy source instead of their usual carbohydrates and sugars.

“Indeed, small-molecule agonists of PPAR-delta mimic the effects of a high-fat diet in animals fed a normal diet,” Sabatini says.

In addition to activating this metabolic program, PPAR-delta also appears to turn on a set of genes that are important for stem cell identity, Yilmaz says. His lab is now further investigating how this happens in hopes of identifying possible cancer drug targets for tumors that arise in obesity.

Gokhan Hotamisligil, director of the Sabri Ulker Center for Nutrient, Genetic, and Metabolic Research at the Harvard School of Public Health, says the study convincingly offers a potential explanation for the mechanism by which a high-fat diet contributes to cancer.

“While the problem is very big, there’s very little known about how this happens,” Hotamisligil says. “This study adds an interesting perspective from a stem cell angle.”

This work was supported in part by the Koch Institute Frontier Research Program through the Kathy and Curt Marble Cancer Research Fund, and by the V Foundation.