How diet and the microbiome affect colorectal cancer 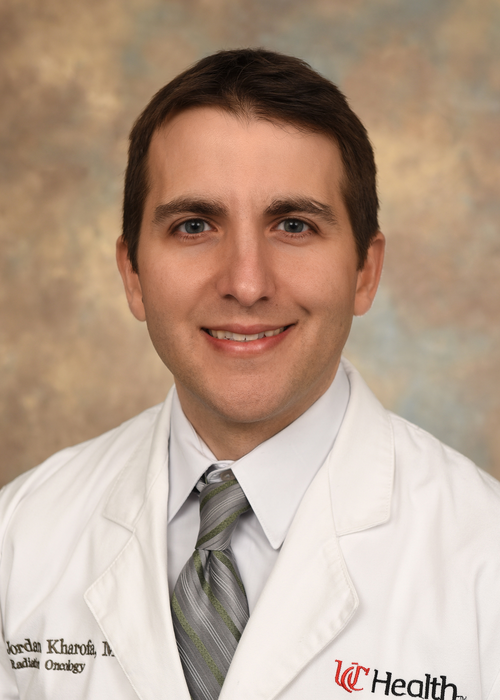 Since 2009, the rate of new colorectal cancer diagnoses in patients under age 50 has increased by 2% each year.

“When I started practice and residency around 2010, I’d uncommonly see patients who were less than 50 years old,” said Jordan Kharofa, MD, associate professor in the Department of Radiation Oncology in the University of Cincinnati’s College of Medicine, a University of Cincinnati Cancer Center member and a UC Health physician. “But more and more we’re seeing these patients in our clinics now to the point where it doesn’t strike us as an exception to the rule.”

The research is still unclear exactly what is causing increased cancer rates in young people, but Kharofa said one hypothesis is that patients’ diets and the bacteria in their gut are contributing factors. This led he and his colleagues to research the relationship between bacteria in the fecal microorganisms, or microbiome, and rates of colorectal cancer in younger populations.

Kharofa delivered a poster presentation on his findings at the recent American Society of Clinical Oncology annual meeting in Chicago.

The microbiome is a term used for the collection of microbes, including microorganisms like bacteria, that live on or in the human body. Kharofa said advances in DNA sequencing have allowed researchers to better characterize what species of bacteria are present in the microbiome, leading to a boom in research over the past 10 years.

“In the past, we’d have to culture specific bacteria and isolate them, and that’s really complicated,” he said. “But now with the genetics and the cost of sequencing going down, we can quickly characterize what species are where and try to understand if they have implications for normal health and disease.”

Kharofa said previous studies have shown that certain bacteria species present in the gut are associated with colorectal cancer. The research team then asked the question if these cancer-causing bacteria were elevated specifically in younger colorectal cancer patients compared to older patients and to healthy patients.

Kharofa collaborated with a team including Nicholas J. Ollberding, PhD, a Cincinnati Children’s Hospital Medical Center bioinformatician and associate professor in the UC Department of Pediatrics. Using genetic data from 11 previous studies, the team analyzed microbiome data from 609 patients who were healthy and 692 patients with colorectal cancer.

The research found two species of bacteria most closely associated with causing colorectal cancer were not found in higher levels among young patients, meaning these bacteria are unlikely to be responsible for increased cancer rates in young people.

Five other bacteria were found in higher levels in young people, including one species that is associated with a sulfur microbial diet, or a diet that is both high in processed meats, low-calorie drinks and liquor and low in raw fruits, vegetables and legumes.

Other epidemiologic studies without access to stool have revealed connections between a sulfur microbial diet and a higher increased risk of cancer in younger people, and Kharofa said this study is consistent with these previous findings.

“Although these patients aren’t obese, there may be dietary patterns that happen early in life that enrich for certain bacteria such as this one,” Kharofa said. “It’s not that what you’re eating has carcinogens in them, but the byproducts produced during bacteria metabolism may lead to carcinogenic chemicals. It’s possible that interactions between diet and the microbiome may mediate the formation of colorectal cancer cells and heightened risk in younger populations over the last several decades.”

While more research is needed, Kharofa said a tangible takeaway from the study is for young people to eat more raw fruits and vegetables and legumes and less processed meats in their diets.

“There’s still a lot we don’t understand about how the diet influences the microbiome and how that might influence cancer, but this is a small sneak peek at something that might be going on,” he said. “There’s a lot of reasons to eat less processed foods and diets rich in raw fruits, vegetables and legumes, and this might be one more.”

Kharofa said further research will look to learn more about the bacteria species that were found in higher levels in younger patients and how these species contribute both to the development of cancer and to the cancer’s response to treatment.

As the role of bacteria becomes clearer, there is also the potential for more advanced and tailored screening for younger patients.

“It’s really difficult to just screen everybody because the rates are pretty low in the entire population of individuals less than 45 years old,” he said. “But if you are able to profile the microbiome and maybe do targeted screening in some patients who had higher risk based on their stool, that might be a worthwhile investigation.”

Even if a person is younger, Kharofa said anyone with symptoms should be evaluated by a doctor. Signs and symptoms of colorectal cancer include rectal bleeding or blood in the stool; persistent abdominal discomfort, including gas, bloating, fullness or cramps; diarrhea, constipation or feeling that the bowel does not fully empty; unknown weight loss; fatigue and vomiting.

“Screening is for asymptomatic people, and anyone with symptoms needs to be evaluated,” Kharofa said. “We unfortunately see these patients presenting later at diagnosis because their symptoms were ignored. If you’re young and you have symptoms, you need to be evaluated.”