How chronic inflammation can lead to cancer 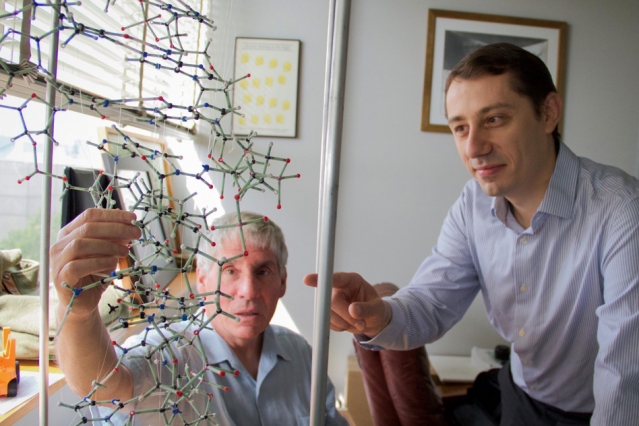 Bogdan Fedeles (right), a research associate in the MIT Department of Biological Engineering and lead author on a new paper on the link between chronic inflammation and cancer, examines a DNA model with professor John Essigmann, who led the current research.

Chronic inflammation caused by disease or exposure to dangerous chemicals has long been linked to cancer, but exactly how this process takes place has remained unclear.

Now, a precise mechanism by which chronic inflammation can lead to cancer has been uncovered by researchers at MIT — a development that could lead to improved targets for preventing future tumors.

In a paper published this week in the Proceedings of the National Academy of Sciences, the researchers unveil how one of a battery of chemical warfare agents used by the immune system to fight off infection can itself create DNA mutations that lead to cancer.

As many as one in five cancers are believed to be caused or promoted by inflammation. These include mesothelioma, a type of lung cancer caused by inflammation following chronic exposure to asbestos, and colon cancer in people with a history of inflammatory bowel disease, says Bogdan Fedeles, a research associate in the Department of Biological Engineering at MIT, and the paper’s lead author.

Inflammation is part of the body’s innate response to invading pathogens or potentially harmful irritants. The immune system attacks the invader with a number of reactive molecules designed to neutralize it, including hydrogen peroxide, nitric oxide and hypochlorous acid.

However, these molecules can also cause collateral damage to healthy tissue around the infection site: “The presence of a foreign pathogen activates the immune response, which tries to fight off the bacteria, but in this process it also damages some of the normal cells,” Fedeles explains.

Previous work by Peter Dedon, Steven Tannenbaum, Gerald Wogan, and James Fox — all professors of biological engineering at MIT — had identified the presence of a lesion, or site of damage in the structure of DNA, called 5-chlorocytosine (5ClC) in the inflamed tissues of mice infected with the pathogen Helicobacter hepaticus. This lesion, a damaged form of the normal DNA base cytosine, is caused by the reactive molecule hypochlorous acid — the main ingredient in household bleach — which is generated by the immune system.

The lesion, 5ClC, was present in remarkably high levels within the tissue, says John Essigmann, the William R. (1956) and Betsy P. Leitch Professor in Residence Professor of Chemistry, Toxicology and Biological Engineering at MIT, who led the current research.

“They found the lesions were very persistent in DNA, meaning we don’t have a repair system to take them out,” Essigmann says. “In our field lesions that are persistent, if they are also mutagenic, are the kind of lesions that would initiate cancer,” he adds.

DNA sequencing of a developing gastrointestinal tumor revealed two types of mutation: cytosine (C) bases changing to thymine (T) bases, and adenine (A) bases changing to guanine (G) bases. Since 5ClC had not yet been studied as a potentially carcinogenic mutagen, the researchers decided to investigate the lesion further, in a bid to uncover if it is indeed mutagenic.

Using a technique previously developed in Essigmann’s laboratory, the researchers first placed the 5ClC lesion at a specific site within the genome of a bacterial virus. They then replicated the virus within the cell.

The researchers found that, rather than always pairing with a guanine base as a cytosine would, the 5ClC instead paired with an adenine base around 5 percent of the time — a medically relevant mutation frequency, according to Essigmann.

The findings suggest that the immune system, when triggered by infection, fires hypochlorous acid at the site, damaging cytosines in the DNA of the surrounding healthy tissue. This damage causes some of the cytosines to become 5ClC.

In addition, the researchers hypothesize that the hypochlorous acid also damages cytosines in the nucleotide pool, which cells use as the reservoir of nucleotides that will become part of the DNA of replicating cells, Essigmann says. “So 5ClC forms first in genomic DNA, and secondly it can form in the nucleotide pool, meaning the nucleotides in the pool are mutagenic in themselves,” he explains. “This scenario would best explain the work of James Fox and his MIT colleagues on gastrointestinal cancer.”

To confirm that 5ClC is mutagenic in human DNA, the researchers replicated the genome containing the lesion with a variety of different types of polymerase, the enzyme that assembles DNA, including human polymerases. “In all cases we found that 5ClC is mutagenic, and causes the same kind of mutations seen within cells,” Fedeles says. “That gave us confidence that this phenomenon would in fact happen in human cells containing high levels of 5ClC.”

What’s more, the C-to-T mutation characteristic of 5ClC is extremely common, and is present in more than 50 percent of mutagenic “signatures,” or patterns of DNA mutations, associated with cancerous tumors. “We believe that in the context of inflammation-induced damage of DNA, many of these C-to-T mutations may be caused by 5ClC, possibly in correlation with other types of mutations as part of these mutational signatures,” Fedeles says.

Yinsheng Wang, a principal investigator in the Department of Chemistry at the University of California at Riverside who was not involved in the research, says the paper provides a novel mechanistic link between chronic inflammation and cancer development. “With a combination of biochemical, genetic, and structural biology approaches, the researchers have found that 5-chlorocytosine is intrinsically miscoding during DNA replication and it could give rise to significant frequencies of C-to-T mutation, a type of mutation that is frequently observed in human cancers,” Wang says.

Studies of tissue samples of patients suffering from inflammatory bowel disease have found significant levels of 5ClC, Fedeles adds. By comparing these levels with his team’s findings on how mutagenic 5ClC is, the researchers predict that accumulation of the lesions would increase the mutation rate of a cell up to 30-fold, says Fedeles, who was honored with the prestigious Benjamin F. Trump award at the 2015 Aspen Cancer Conference for the research.

The researchers now plan to carry out further studies to confirm their prediction, Fedeles says.