How cancer cells fuel their growth 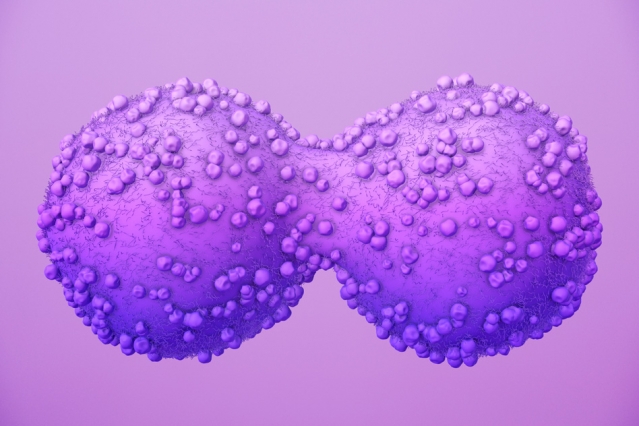 Cancer cells are notorious for their ability to divide uncontrollably and generate hordes of new tumor cells. Most of the fuel consumed by these rapidly proliferating cells is glucose, a type of sugar.

Scientists had believed that most of the cell mass that makes up new cells, including cancer cells, comes from that glucose. However, MIT biologists have now found, to their surprise, that the largest source for new cell material is amino acids, which cells consume in much smaller quantities.

The findings offer a new way to look at cancer cell metabolism, a field of research that scientists hope will yield new drugs that cut off cancer cells’ ability to grow and divide.

“If you want to successfully target cancer metabolism, you need to understand something about how different pathways are being used to actually make mass,” says Matthew Vander Heiden, the Eisen and Chang Career Development Professor and an associate professor in the Department of Biology, and a member of MIT’s Koch Institute for Integrative Cancer Research.

Vander Heiden is the senior author of the study, which appears in the journal Developmental Cell on March 7. The paper’s lead author is MIT graduate student Aaron Hosios.

Since the 1920s, scientists have known that cancer cells generate energy differently than normal cells, a phenomenon dubbed the “Warburg effect” after its discoverer, German biochemist Otto Warburg. Human cells normally use glucose as an energy source, breaking it down through a series of complex chemical reactions that requires oxygen. Warburg discovered that tumor cells switch to a less efficient metabolic strategy known as fermentation, which does not require oxygen and produces much less energy.

More recently, scientists have theorized that cancer cells use this alternative pathway to create building blocks for new cells. However, one strike against this hypothesis is that much of the glucose is converted into lactate, a waste product that is not useful to cells. Furthermore, there has been very little research on exactly what goes into the composition of new cancer cells or any kind of rapidly dividing mammalian cells.

“Because mammals eat such a diversity of foods, it seemed like an unanswered question about which foods contribute to what parts of mass,” Vander Heiden says.

To determine where cells, including those in tumors, were getting the building blocks they needed, the researchers grew several different types of cancer cells and normal cells in culture dishes. They fed the cells different nutrients labeled with variant forms of carbon and nitrogen, allowing them to track where the original molecules ended up. They also weighed the cells before and after they divided, enabling them to calculate the percentage of cell mass contributed by each of the available nutrients.

“These experiments reveal important details that reinforce our fundamental understanding of the metabolic underpinnings of molecular biosynthesis and cellular proliferation,” says Jared Rutter, a professor of biochemistry at the University of Utah who was not involved in the research. “The MIT team has performed a rigorous and quantitative assessment of the contributions of glucose, glutamine, and other molecules to the mass of proliferating mammalian cells in culture.”

Although initially surprising, the findings make sense, Vander Heiden says, because cells are made mostly of protein.

“There’s some economy in utilizing the simpler, more direct route to build what you’re made out of,” he says. “If you want to build a house out of bricks, it’s easier if you have a pile of bricks around and use those bricks than to start with mud and make new bricks.”

It remains something of a mystery why proliferating human cells consume so much glucose. Consistent with previous studies, the researchers found that most of the glucose burned by these cells is excreted as lactate.

“This led us to conclude that the importance of high glucose consumption is not necessarily the manipulation of carbon that allows you to make cell mass, but more for the other products that it provides, such as energy,” Hosios says.

Other authors of the paper include Vivian Hecht, a former MIT graduate student; Laura Danai, a Koch Institute postdoc; Scott Manalis, the Andrew (1956) and Erna Viterbi Professor in the MIT departments of Biological Engineering and Mechanical Engineering and a member of the Koch Institute; Jeffrey Rathmell, a professor at Vanderbilt University School of Medicine; Marc Johnson, a Vanderbilt University postdoc; and Matthew Steinhauser, an assistant professor of medicine at Harvard Medical School and Brigham and Women’s Hospital.

The research was funded by the National Institutes of Health, the Burroughs Wellcome Fund, and the Damon Runyon Cancer Research Foundation.