How can we conserve Seychelles giant trevallies? 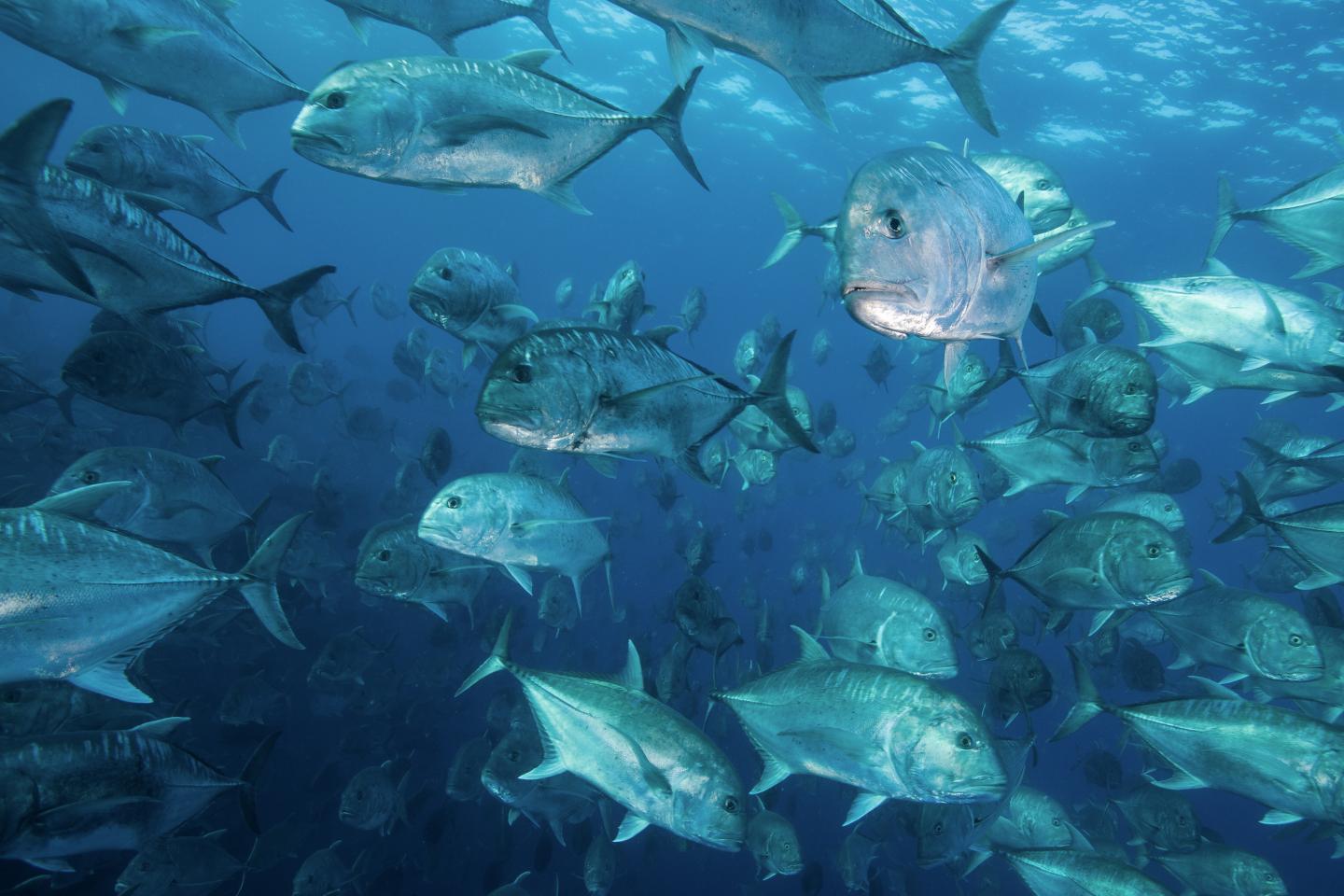 Geneva, 15th April 2021 – When it was shown launching out of the sea to snatch birds from the air in the first episode of the BBC’s Blue Planet II, the Seychelles giant trevally, or ‘karang ledan’ as it is called in Creole, became world-famous. Typically eating fish, not birds, this reef predator is critical for maintaining healthy balanced ecosystems. ‘The giant trevally is a popular, sought-after prize fish in Seychelles, particularly in the big-game sportfishing industry. Seychelles has a reputation for being one of the best trevally destinations in the world. The species is also caught in the handline fishery,’ explains Helena Sims, the Save Our Seas Foundation’s Seychelles ambassador. Sims, with more than a decade of conservation experience, is part of the initiative determining which 30% of Seychelles waters should become marine protected areas (MPAs).

‘Although the giant trevally is very popular and sought after, not much was known about its population dynamics in Seychelles until recently. For Seychelles, it is important to study the range of targeted species to better understand how to manage and conserve them effectively,’ Sims explains. New research by the Save Our Seas Foundation D’Arros Research Centre (SOSF-DRC) has revealed that to protect giant trevally throughout their lifespan, the nursery areas of this iconic predator, which are critical habitats for the survival of the next generation, should be conserved. In addition, the larger areas these fish move through and frequently use as adults should be taken into account when conservation planning is undertaken.

To find out where giant trevally went, and when and why, individuals were tagged with acoustic tags in 2019 and tracked across the Amirantes, a group of outer islands in Seychelles. Some were tracked for more than three years. This revealed that juveniles stayed around St Joseph Atoll, but that the extent of the area they frequently used quickly increased as they grew bigger. By the time they were adults, they were using the whole Amirantes Bank. Although small and large adults utilised similar areas, large adults occasionally travelled longer distances, probably driven by their need to find more food to eat as they grew, in order to meet their increasing energy requirements. Both the reduced risk of predation on account of their increased size and the onset of sexual maturity appear to be linked to them using a larger area and a wider diversity of habitats. This study showed that the area giant trevally frequently used was larger than had been reported from other tropical islands and atolls around the world.

In this study ‘it took some giant trevally a surprisingly long time – on average 18 months but sometimes over 30 – to use the full extent of their home range,’ says Dr Ryan Daly, a former director of the SOSF-DRC. ‘This emphasises the need to follow, track and monitor threatened species in the marine environment for long enough to appreciate the full extent of their home range and thus to understand how spatial protection like MPAs is going to be effective.’ Daly led the study, which was published as ‘Ontogenic shifts in home range size of a top predatory reef-associated fish (Caranx ignobilis): Implications for conservation’ in Marine Ecology Progress Series on 15 April 2021. Daly suggests that further conservation planning in the region could take into account the findings of this study.

The Save Our Seas Foundation (SOSF) commends the marine protection measures Seychelles is putting in place. ‘The giant trevally is a beautiful fish and an important predator. I am delighted that our work from the D’Arros Research Centre is helping us learn more about its behaviour and providing insight to help its conservation,’ comments the SOSF’s Founder, His Excellency Abdulmohsen Abdulmalik Al-Sheikh. The entire Amirantes Bank, including St Joseph Atoll, has already been demarcated as part of an Area of Outstanding Natural Beauty by the Seychelles government, which is a Zone 2 protected area. Within this area, fishing by foreign vessels is not allowed (with regulations to be finalised later this year for implementation).

This is part of the Marine Spatial Plan Initiative by the Seychelles government, which announced a series of 13 new MPAs in March 2020. Daly recommends that St Joseph Atoll’s Zone 2 status should not allow fishing of giant trevally because the area protects the next generation. If fishing is to be allowed at St Joseph Atoll, he advises that it should only be catch-and-release. He suggests the areas that the adults commonly use and occasionally move through, as revealed by this study, should also be considered when further conservation planning is carried out in the region. Daly explains that it will be important to find a balance between harvesting giant trevally as a food source and high-value giant trevally catch-and-release fishing. He encourages high-value catch-and-release fishing of giant trevally, but stresses that regardless of the balance chosen, it is important to protect nursery areas like St Joseph Atoll so that giant trevally fishing is sustainable.

The Save Our Seas Foundation D’Arros Research Centre:

Daly’s research utilised the impressive network of 88 acoustic receivers positioned around St Joseph Atoll. This array of receivers is the only one of its size and kind in the Amirantes and belongs to the SOSF-DRC. The centre works with Seychellois to support research, conservation and education in Seychelles. The SOSF also provides technical support and funding to numerous conservation and research projects in Seychelles.