AMHERST, Mass. – New research led by the University of Massachusetts Amherst into the life and times of a New England salt marsh fundamentally changes our understanding of how salt marshes acquire the sediment that keeps them viable. This research, published recently in the Journal of Geophysical Research: Earth Surface, has wide-ranging implications for managing New England’s coastline as it struggles to keep up with development, sea-level rise and other environmental impacts. 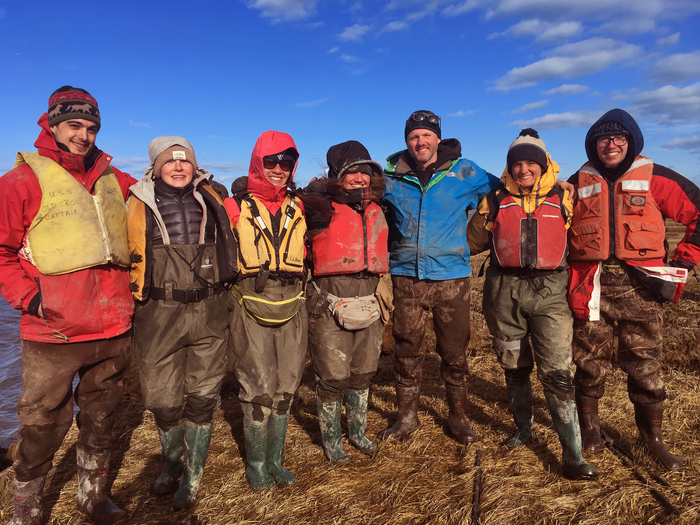 AMHERST, Mass. – New research led by the University of Massachusetts Amherst into the life and times of a New England salt marsh fundamentally changes our understanding of how salt marshes acquire the sediment that keeps them viable. This research, published recently in the Journal of Geophysical Research: Earth Surface, has wide-ranging implications for managing New England’s coastline as it struggles to keep up with development, sea-level rise and other environmental impacts.

Salt marshes are critically important because they buffer against erosion and flooding, sequester carbon, provide habitat to juvenile species and migratory birds, and filter pollutants and excess nutrients, but a marsh can only survive when its surface sits high enough above sea level to drain at low tide, which means that marshes need to import mineral sediment to build volume and survive.

For decades, the standard model of how a salt marsh developed went like this: as a river wound its way to the sea, it picked up sediment as it flowed through hill and field. Once the river arrived at the coast, it slowed down and dropped its sediment load, which salt marshes have incorporated and grown upon over the years to form the salt marsh platforms at river and stream mouths throughout New England. The only problem with this model is that it might not be the way that New England’s salt marshes actually work.

“We’ve been looking in the wrong direction,” says Jon Woodruff, professor of geosciences at UMass Amherst and one of the paper’s co-authors. “These sediments are mostly coming from the ocean, not rivers.”

“If we’re going to manage and protect salt marshes efficiently and effectively, we need to know where their sediment comes from,” says Hannah Baranes, the paper’s lead author and a postdoctoral researcher at the Gulf of Maine Research Institute (GMRI) who completed this research as part of her Ph.D. in geosciences at UMass. “But a great deal of previous work has focused on large, complex marsh systems, which has made it difficult to pinpoint where exactly sediment comes from.”

Baranes and her colleagues focused their research on the North/South River estuary, a typical New England salt marsh system near Marshfield, Massachusetts. They combined long, medium and short-term experiments, which ranged from taking sediment cores that record a 200-year history of the marsh, to placing instruments in the channel and on the surface of the marsh to track sediment transport and deposition in real time.

It was dirty work: “we had to navigate these salt marshes on foot and figure out how to get our equipment in and out while wading through waist-deep mud in all seasons,” says Baranes. Then there were the mosquitoes and other bugs to deal with. And don’t even get Baranes started on the crabs that fell into some of the sediment traps. But over the course of two years, Baranes and her colleagues, including undergraduates from UMass Amherst, were able to stitch together an unprecedented look at the life of salt marshes in New England.

It turns out that the vast majority of sediment is delivered by the ocean during the storms that batter the coast. This has important implications for the health of New England’s coasts. “Salt marshes are expensive to protect and we have limited resources to figure out this problem,” says Baranes. “We need to understand any natural process that can help us out.”

Furthermore, as Woodruff points out, beaches and marshes are paired systems, and any effort to protect beaches against erosion can affect the health of the salt marshes in unforeseen ways. Unfortunately, there is very little work to date that does so, and so we don’t really know what unforeseen consequences “coastal armoring”—including the creation of sea walls, jetties, etc.—might have on neighboring salt marshes.

Both researchers plan to continue exploring the interactions between salt marshes and other coastal features, such as Maine’s bluffs and Massachusetts’s beaches.

The research, funded by the DOI/USGS Northeast Climate Adaptation Science Center, also benefitted immensely from the work of UMass Amherst undergraduate researchers. “This has been a fantastic opportunity to bring undergrads into the project and show them what actual in-the-field science research looks like,” says Baranes, and Woodruff agrees. “We always have students who grew up on the coast, and they love bringing that personal history to their scientific research.”

Sources, Mechanisms, and Timescales of Sediment Delivery to a New England Salt Marsh