How a contagious cancer spread among clams

A contagious blood cancer jumped from one species of clam to another and spread among clams living in the Atlantic Ocean and Mediterranean Sea, shows a study published today in eLife. 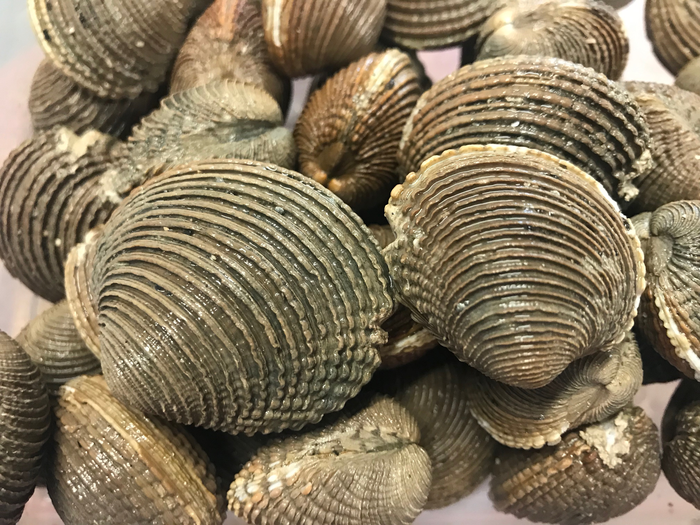 A contagious blood cancer jumped from one species of clam to another and spread among clams living in the Atlantic Ocean and Mediterranean Sea, shows a study published today in eLife.

The findings add to evidence that cancers may spread among different species of bivalve shellfish and suggest that human activities may be inadvertently contributing to the spread of these cancers to new locations and species.

Contagious cancers have been identified in dogs, Tasmanian devils, and bivalves such as clams and mussels. These diseases usually spread among individuals of the same species. But previous studies have documented at least two cases of contagious cancers spreading among bivalve species.

“We set out to confirm whether a leukemia-like blood cancer found in some bivalves also infects Venus verrucosa, otherwise known as warty venus clams that are found in the seas of southern Europe,” says Daniel García-Souto, a postdoctoral researcher in genetics at the University of Santiago de Compostela – USC, Galicia, Spain, and a co-first author of the study alongside Alicia Bruzos and Seila Diaz at USC.

The researchers collected 345 warty venus clams from the coastal areas of Spain, Portugal, France, Ireland and Croatia. They found a type of blood cancer called hemic neoplasia in warty venus clams collected from two different coastal regions of Spain. One group of infected clams was found along the country’s Atlantic coast, while the other group was found more than 1,000 nautical miles away in the Mediterranean Sea.

The team used a technique called whole-genome sequencing to reveal that the cancer originated in a single clam, later became infectious, and spread among warty venus clams. The cancer contained genetic sequences from both the warty venus clam and another unknown species of clam. By comparing the unknown genetic sequence to a genetic database of bivalve species, the researchers were able to identify the mystery clam as Chamelea gallina, or the striped venus clam.

Further testing of DNA taken from the cell mitochondria and nucleus in both clam species confirmed that the cancer had jumped from the striped venus clam to the warty venus clams.

“The genetic similarity of the cancer cells found in warty venus clams in both the Atlantic Ocean and Mediterranean Sea suggests that human shipping activities may have transported the cancer from one region to another,” says co-first author Alicia Bruzos, who was a Researcher PhD Student at USC at the time the study was carried out, and is now at the Francis Crick Institute in London, UK. This idea is supported by a previous study in eLife* which showed that mussels carried a contagious cancer across the Atlantic by hitching a ride on ships.

The team now hopes to carry out further studies to determine the age of the tumours in their clam specimens and to explore for how long cancer may have been spreading among these species.

“Our work confirms that contagious cancers can jump between marine clam species,” concludes senior author José Tubío, Researcher in Genomes and Disease at USC. “As this may pose a potential threat to marine ecology, we need to keep studying and monitoring pathogens including cancers to help protect these species.”

The authors have highlighted the findings of this study in an accompanying video.

eLife is a non-profit organisation created by funders and led by researchers. Our mission is to accelerate discovery by operating a platform for research communication that encourages and recognises the most responsible behaviours. We review selected preprints in all areas of biology and medicine, including Cancer Biology and Ecology, while exploring new ways to improve how research is assessed and published. eLife receives financial support and strategic guidance from the Howard Hughes Medical Institute, the Knut and Alice Wallenberg Foundation, the Max Planck Society and Wellcome. Learn more at https://elifesciences.org/about.

And for the latest in Ecology, see https://elifesciences.org/subjects/ecology.