Hoverfly brains mapped to detect the sound of distant drones

For the first time, Australian researchers have reverse engineered the visual systems of hoverflies to detect drones’ acoustic signatures from almost four kilometres away. 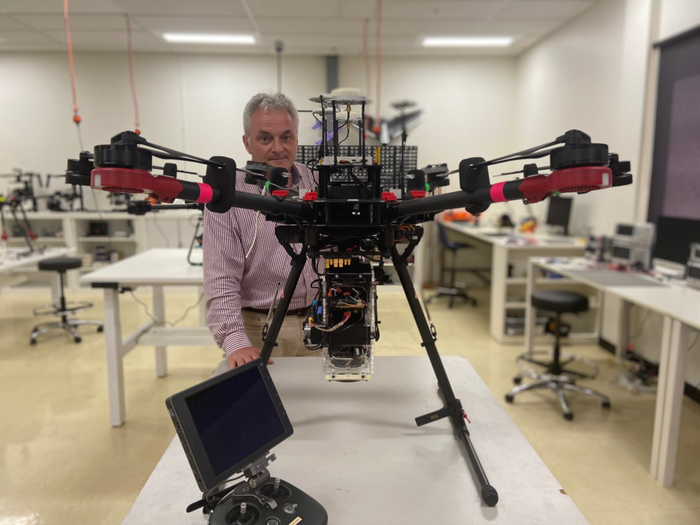 For the first time, Australian researchers have reverse engineered the visual systems of hoverflies to detect drones’ acoustic signatures from almost four kilometres away.

The findings, which could help combat the growing global threat posed by IED-carrying drones, including in Ukraine, have been reported in The Journal of the Acoustical Society of America.

UniSA Professor of Autonomous Systems, Anthony Finn, says that insect vision systems have been mapped for some time now to improve camera-based detections, but this is the first time that bio-vision has been applied to acoustic data.

“Bio-vision processing has been shown to greatly increase the detection range of drones in both visual and infrared data. However, we have now shown we can pick up clear and crisp acoustic signatures of drones, including very small and quiet ones, using an algorithm based on the hoverfly’s visual system,” Prof Finn says.

The hoverfly’s superior visual and tracking skills have been successfully modelled to detect drones in busy, complex and obscure landscapes, both for civilian and military purposes.

“Unauthorised drones pose distinctive threats to airports, individuals and military bases. It is therefore becoming ever-more critical for us to be able to detect specific locations of drones at long distances, using techniques that can pick up even the weakest signals. Our trials using the hoverfly-based algorithms show we can now do this,” Prof Finn says.

Associate Professor in Autonomous Systems at Flinders University, Dr Russell Brinkworth, says the ability to both see and hear small drones at greater distances could be hugely beneficial for aviation regulators, safety authorities and the wider public seeking to monitor ever increasing numbers of autonomous aircraft in sensitive airspace.

“We’ve witnessed drones entering airspace where commercial airlines are landing and taking off in recent years, so developing the capacity to actually monitor small drones when they’re active near our airports or in our skies could be extremely beneficial towards improving safety.

“The impact of UAVs in modern warfare is also becoming evident during the war in Ukraine, so keeping on top of their location is actually in the national interest. Our research aims to extend the detection range considerably as the use of drones increases in the civilian and military space.”

Compared with traditional techniques, bio-inspired processing improved detection ranges by between 30 and 49 per cent, depending on the type of drone and the conditions.

Researchers look for specific patterns (narrowband) and/or general signals (broadband) to pick up drone acoustics at short to medium distances, but at longer distance the signal is weaker and both techniques struggle to achieve reliable results.

Similar conditions exist in the natural world. Dark lit regions are very noisy but insects such as the hoverfly have a very powerful visual system that can capture visual signals, researchers say.

“We worked under the assumption that the same processes which allow small visual targets to be seen amongst visual clutter could be redeployed to extract low volume acoustic signatures from drones buried in noise,” Dr Brinkworth says.

By converting acoustic signals into two-dimensional ’images’ (called spectrograms), researchers used the neural pathway of the hoverfly brain to improve and suppress unrelated signals and noise, increasing the detection range for the sounds they wanted to detect.

Using their image-processing skills and sensing expertise, the researchers made this bio-inspired acoustic data breakthrough thanks to Federal Government funding through the Department of Defence’s Next Generation Technologies Fund

The funding partly supports technological solutions to address the weaponisation of drones which are now among the deadliest weapons in modern warfare, killing or injuring more than 3000 enemy combatants in Afghanistan and being deployed in the current war in Ukraine.

A video explaining the technology can be viewed here: https://youtu.be/zAmiyaDH5oQ

The Journal of the Acoustical Society of America