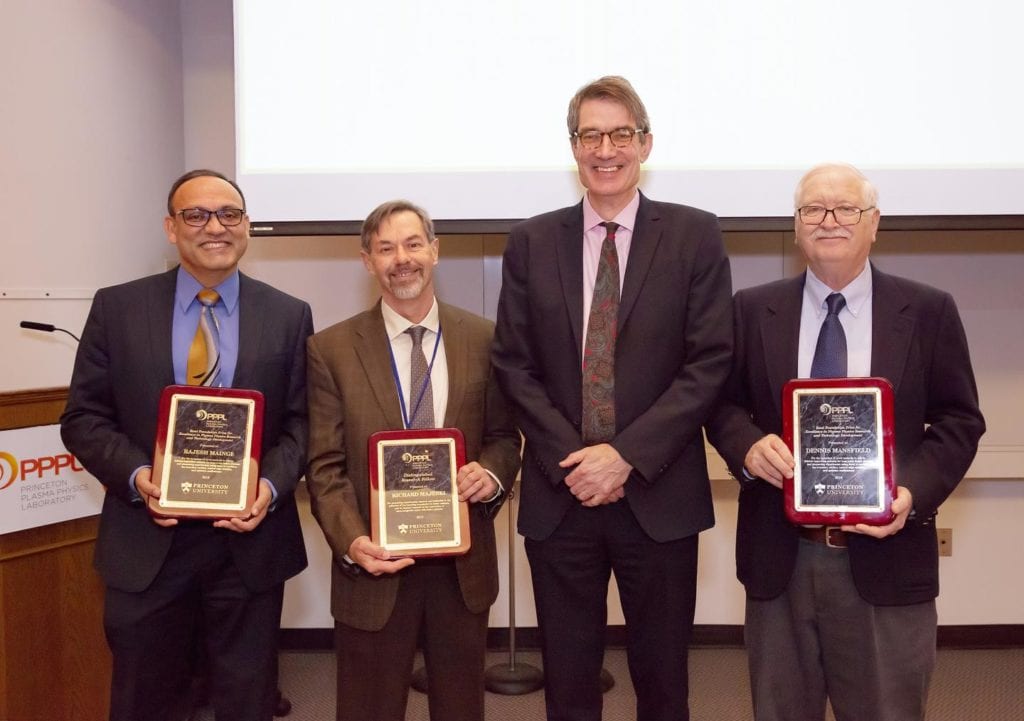 Major developments in the use of lithium to improve the performance of fusion plasmas — the hot, charged state of matter composed of free electrons and atomic nuclei that fuels fusion reactions — have earned a trio of physicists the 2018 outstanding research awards from the U.S. Department of Energy’s (DOE) Princeton Plasma Physics Laboratory (PPPL). Scientists around the world are seeking to replicate on Earth the fusion that drives the sun and stars to produce a virtually inexhaustible supply of energy to generate electricity.

PPPL Director Steve Cowley presented this year’s honors at the conclusion of his December 19 State of the Laboratory address. Receiving the awards were Rajesh Maingi, a physicist who heads laboratory and international research on the plasma edge and plasma-facing components; Dennis Mansfield, a senior physicist; and Richard Majeski, a physicist who led the Lithium Tokamak Experiment (LTX) experiment at PPPL, the first device to show that coating walls with liquid lithium can produce high-performance plasmas, and now is principal investigator for its successor, the Lithium Tokamak Experiment-β (LTX-β).

Maingi and Mansfield earned this year’s Kaul Foundation Prize for Excellence in Plasma Physics Research and Technology Development, which comes with $7,000 awards. The honor was “For inventing novel methods to deliver lithium impurities suitable for long-pulse fusion plasmas,” and for “pioneering experiments using [the impurities] to condition the boundary surface, control edge stability, and optimize confinement.” Majeski received the Distinguished Research Fellow honor and a $5,000 award, “For pioneering experimental research and leadership in the influence of low-recycling boundaries for fusion systems, and for seminal research on the interaction of electromagnetic waves with fusion plasmas.”

In presenting the awards, Cowley noted that “a key thing that we’ve been doing is studying how the use of lithium can affect the performance of the boundary of fusion plasmas and therefore affect the whole device. Dennis has been with this since its inception and has moved it forward and made it work.” Rajesh, he said, “has brought to this his insight into the physics that’s going on and has taken our program internationally.” Dick Majeski, he went on, “is another one of the people whose impact on the lab has been so widespread that it’s difficult to summarize. Dick is looking at the impact on the boundaries of what lithium does on the wall and has brought many young people into the field and driven the program forward.”

The Kaul award was endowed by former PPPL Director Ron Davidson from his prize as the 1993 recipient of the Award for Excellence in Science, Education and Physics from the Kaul Foundation in Tampa, Florida. The Distinguished Research Fellow recognition, supported by the DOE, is part of the Distinguished Research and Engineering Fellow Program at PPPL.

The research of Maingi, a world-renowned expert on the physics of the plasma edge, has deepened understanding of the role of lithium in conditioning the boundary of fusion plasmas and modifying plasma confinement near the edge. His contributions have made the silvery metal a candidate for widespread use in present and future tokamaks to enable the plasma to fuel continuous fusion reactions. “His outstanding work has shown how the injection of lithium powder and wall coatings can eliminate edge localized modes (ELMs),” said Raffi Nazikian, head of the ITER and Tokamaks Department, referring to a dangerous instability that can damage tokamak wall components.

“I am deeply honored to be selected for the Kaul Prize, and especially thankful to share it with Dennis Mansfield, as we have closely worked together for the past decade,” Maingi said. “I am also very fortunate for the privilege to have worked with a group of talented researchers that was able to identify the key physical mechanisms responsible for these remarkable lithium effects.”

Maingi, a fellow of the American Physical Society who received the PPPL Distinguished Research Fellow award in 2015, wears many hats for the laboratory and the fusion community. He coordinates plasma material interaction and boundary physics research on the Lab’s National Spherical Torus Experiment Upgrade (NSTX-U) and across PPPL, leads the laboratory’s liquid metal strategic initiative, and serves as deputy head of the ITER and Tokamaks Department. Outside the laboratory he is principal investigator of a multi-institutional DOE award to study plasma-material interactions on international devices, serves as an adjunct professor at the University of Tennessee, Knoxville, and sits on panels ranging from the Fusion Energy Sciences Advisory Committee (FESAC) to the International Tokamak Physics Activities (ITPA) coordinating committee.

The past year has been particularly busy for Maingi, who chaired both the FESAC panel on Transformative Enabling Capabilities for future fusion facilities and the 23rd biennial Plasma-Surface Interactions conference, which drew more than 400 scientists to Princeton University.

Maingi received his Ph.D. from North Carolina State University in 1992 and joined Oak Ridge National Laboratory, which sent him on long-term assignment to the National Spherical Tokamak Experiment (NSTX) at PPPL from 1999 to 2012. He joined PPPL to lead the edge physics and plasma-facing components program in 2012.

Rajesh and his wife, Nola, have two sons: Logan, who is working on a Ph.D. in theoretical physics at Johns Hopkins University, and Quinn, who is starting Ph.D. work in economics at New York University; and a daughter, Jillian, a sixth-grader at Grover Middle School in West Windsor. In his free time Maingi bicycles and swims, and enjoys elaborately carving pumpkins with fiery features for Halloween.

“I’m really happiest when puttering in the lab,” says Dennis Mansfield, whose development of devices for injecting lithium into tokamaks has produced global interest in the metal for conditioning fusion plasmas. “When we started out 25 years ago, we were the only ones doing this. Now it’s done all over the world,” Mansfield said. “I was highly honored to receive this award — it’s gratifying to see that maybe I haven’t wasted my time.”

Mansfield worked closely with Richard Hawryluk, then head of the ITER and Tokamaks Department and now interim PPPL deputy director for operations, when installing devices on international tokamaks. “Dennis is a very creative fellow,” said Hawryluk. “He almost single-handedly pioneered injecting lithium into tokamaks for wall conditioning and modifying the edge of the plasma. He basically defined that important technique.”

Mansfield joined PPPL in 1977 with a doctorate from Rutgers University and developed and ran a diagnostic used on the laboratory’s Tokamak Fusion Test Reactor (TFTR). In 1993 he changed the focus of his research and developed a method for depositing a thin layer of lithium into the TFTR to modify the interaction between the edge of the plasma and the tokamak wall. The lithium produced a remarkable 57-fold increase in the heat, density and confinement time of the plasma –the so-called triple product that leads to energy output.

Mansfield then teamed up with now retired Senior Engineer Lane Roquemore to develop a gravitational dropper to release fine lithium powder into the edge of a tokamak plasma. The physicist and engineer were pleased to find that the lithium produced conditions that effectively suppressed ELMs.

The lithium dropper first suppressed ELMs on the National Spherical Torus Experiment (NSTX) at PPPL and on the Experimental Advanced Superconducting (EAST) in China, and has also improved edge stability on the DIII-D National Fusion Facility that General Atomics operates for the DOE. The device has since been further improved by Alex Nagy, who heads PPPL engineering collaborations on DIII-D and Alessandro Bortolon, a PPPL physicist, to release boron and other powders. In its revised form, the wall conditioning device has been installed on fusion facilities around the world.

Mansfield and Roquemore next developed a lithium granule injector to trigger and pace ELMs, a method for producing small, non-damaging instabilities. Looking back, Mansfield credits a Chinese fortune cookie with describing his research philosophy: “Court serendipity, be eccentric.”

After retiring in 2012, Mansfield continued his research at PPPL as a senior physicist and spent two years as a professor at the Chinese Academy of Sciences in Hefei. In his younger days, he played on the PPPL intramural basketball team — a team that once included Steve Cowley, then a staff physicist and now the PPPL director. These days, when not doing science, Mansfield enjoys fly fishing in cool and shady trout streams. He and his wife, Beverly, have three daughters, Kimberly, Leslie, and Jill, and enjoy spending time with their five granddaughters, Anna, Grace, Brooke, Alyssa, and Kacie, and their grandson, Connor.

Richard (Dick) Majeski’s pioneering research on the LTX and its successor, the LTX-β, has focused on the use of liquid lithium to coat the inner walls of fusion devices. The liquid metal acts as a sponge that absorbs particles that escape from the core of the plasma and prevents them from recycling back into the plasma and cooling it down to halt fusion reactions.

“It’s timely to recognize Dick’s leadership and persistence in achieving these results,” said Michael Zarnstorff, deputy director for research at PPPL. “It’s quite an exemplary record.”

Along with his prolific research –Majeski has authored or co-authored 273 papers — he and physicist Robert Kaita, who retired this year, have trained numerous graduate students and post-doctoral fellows who have done research on the machine.

“I definitely appreciate this research award,” Majeski said. “I have high hopes for the future.” He credited engineer Tom Kozub for making the LTX and the LTX-? a reality, and cited Kaita and graduate students and post-doctoral associates who have worked on the machine.

Majeski earned his doctorate from Dartmouth College in 1979 and joined PPPL in 1992. He previously was a research associate at the University of Wisconsin-Madison Department of Nuclear Engineering and the University of Maryland Institute for Physical Science and Technology. At PPPL, he first worked on the Current Drive Experiment-Upgrade (CDX-U), which operated from 1999 to 2005 with a circular pool of liquid lithium at the bottom of the plasma. The device was disassembled to make way for the LTX, which made its first plasma in 2008 and first used liquid metal in 2010.

Under Majeski, the LTX became the first experiment to demonstrate that using full liquid lithium walls can produce high-performance plasmas. “What LTX did was jump over what amounted to a very high bar because there was a good bit of doubt in the community that you could make flat temperature profiles in a fusion device,” Majeski said.

The next hurdle, he said, will be proving that the same flat temperature profile can be maintained with the addition of a neutral beam injector to the LTX-?. The upgraded device will also double the strength of the magnetic field, increase the pulse length and the plasma current, and employ new diagnostics and new types of lithium evaporators for coating the tokamak’s walls.

The Distinguished Research Fellow is the second PPPL honor for Majeski, who received the Kaul Foundation Prize in 2010 with Kaita and physicist Leonid Zakharov. He has taught “Fusion Plasmas and Plasma Diagnostics” in Princeton University’s Department of Astrophysical Sciences since 1998, and was named a fellow of the American Physical Society in 2007.

An avid cyclist, Majeski bikes to work from his Princeton home. He has been married to Mary Dolan for 34 years, and the couple has three grown children: Anna, a fellow at the American Academy of Rome in medieval art; Joseph, a graduate student in biomedical engineering at the University of Rochester; and Stephen, who is pursuing a master’s degree in physics at Rensselaer Polytechnic Institute.