Thierry Pécot, Ph.D., a researcher at Hollings Cancer Center at the Medical University of South Carolina, received a grant from the Chan Zuckerberg Initiative to support his current research project about deep learning tools for imaging. 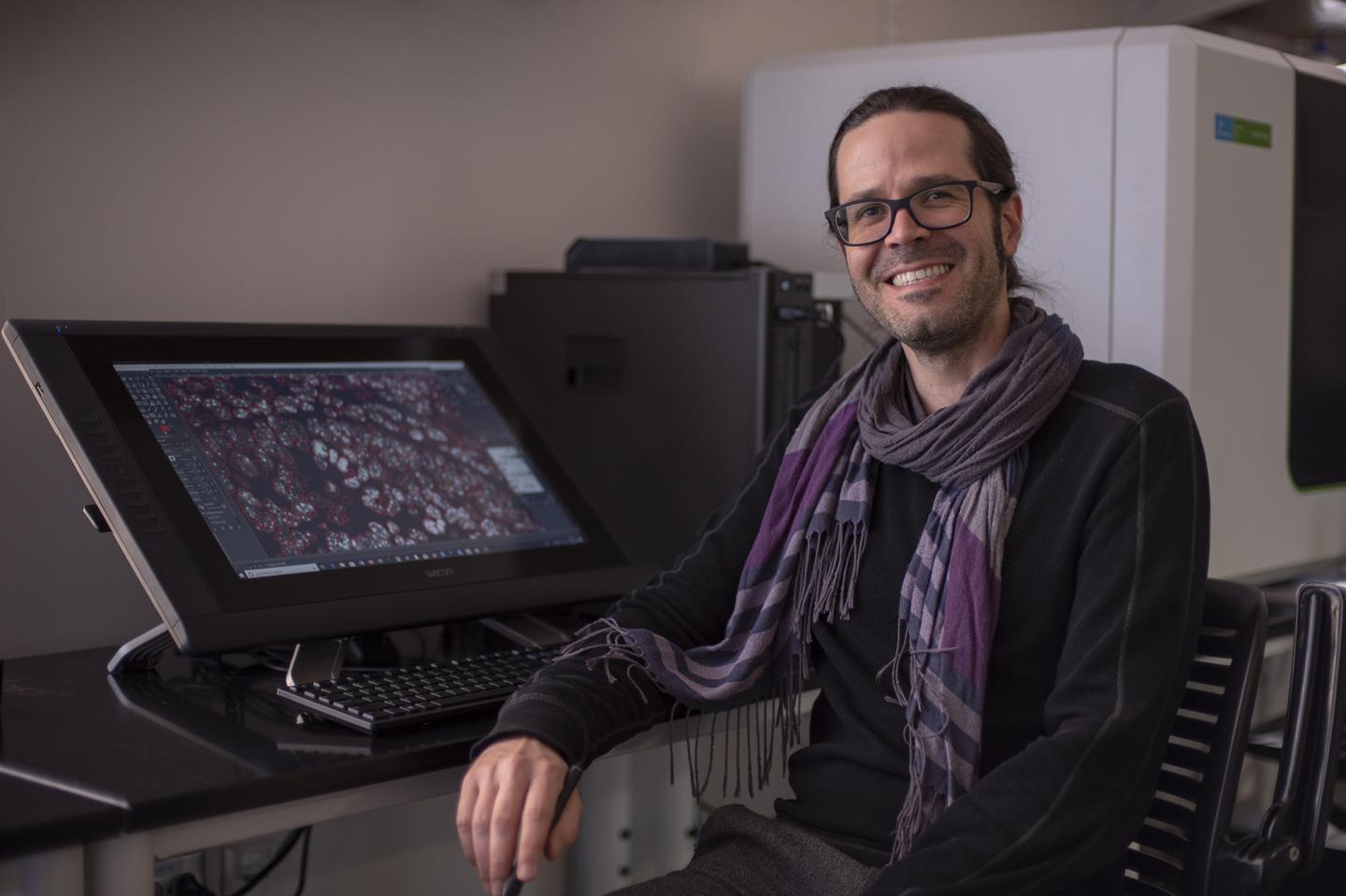 One of the recipients, Thierry Pécot, Ph.D., a researcher at Hollings Cancer Center at the Medical University of South Carolina, says the $1.1 million, five-year grant will support his current research project to enable biologists to apply deep learning tools to their images.

“This is not possible for now as it requires skills most biologists do not have,” says Pécot, who will be providing deep learning segmentation to researchers as part of Hollings Cancer Center’s Translational Science Laboratory. He’ll work closely with biologists to identify their needs to customize the development of a deep learning suite for segmentation at a large scale. This suite will then be extended to design software that biologists can run by themselves.

“I believe that biologists should be able to analyze their images as they are the subject experts. Bringing the best analysis tools to biologists, particularly deep learning tools, is a major challenge” Pécot says. “Like any other analysis application, once it has been developed to answer a biological question, it is important to design software with a simple interface that does not require expertise in applied mathematics so that biologists can take advantage of it.”

Technology in the imaging field has evolved very rapidly, he says. In the last decade, three Nobel prizes in chemistry have been attributed to advances in imaging. Technical advances in imaging dramatically increased the resolution of light microscopy and electron microscopy, yet many of these new microscopes have not been commercialized, and software for analyzing these new kinds of data lags behind the advances made in hardware. Improved technological tools and increased interaction between technology experts and biologists will allow biomedical science to push forward even more quickly to cure disease.

“Since its appearance in 2012, deep learning has changed the conversation about artificial intelligence for image-based decision making. The application of deep learning to biological images is very promising and the range of applications is vast.”

Pécot, who will be teaching a bimonthly tutorial about free software used to process biomedical images, is an engineer and applied mathematician, with expertise in bioimage informatics.

He has developed algorithms and analysis pipelines in the Icy suite of microscopy software, which is an open community platform for bioimage informatics for a variety of biological applications. Since he joined Hollings Cancer Center in 2016, he has been developing a deep learning framework for segmenting cell nuclei in microscopic images, which is used, among other applications, in a pipeline designed to profile tumor immune status.

Pécot wants to harness the power of discovery that imaging offers.

“Good health affects everyone. The amount of information contained in biological images is enormous,” he says. “So far, we have only been using a very small portion of useful data that we can extract from images. It is consequently not a surprise to see that more and more studies coupling images and machine learning are used to answer clinical questions: patient screening, cancerous tissue detection and diagnosis.”

Pécot is thrilled to have been selected as a CZI Imaging scientist and applauds the group’s mission. CZI supports imaging scientists at centers across the nation, who are working at the interface among biology, microscopy hardware and imaging software to accelerate progress in the imaging field and enable biologists to leverage modern technology for microscopy data. This post explains more about the Imaging Scientists and their work.

“Our hope is that microscopy will help scientists identify the causes and effects of diseases. We need to keep advancing these tools to make big breakthroughs in understanding disease,” she says. “One of the ways we’re helping to accelerate scientific progress is by creating connections that otherwise wouldn’t have existed. It’s our hope that by bringing together biologists, clinicians, and engineers, we can drive important advances in the field.”

“That’s why we’re thrilled to support these expert Imaging Scientists. They innovate to develop new technologies, collaborate to bring those methods to a wide audience, and educate other scientists in new methods and best practices.”