MUSC Hollings Cancer Center received its first Stand Up To Cancer (SU2C) grant that will make it part of the Southeastern Consortium for Lung Cancer Health Equity (SC3), a group that will focus on why lung cancer continues to be one of the leading causes of death among racially and ethnically diverse populations in the nation. 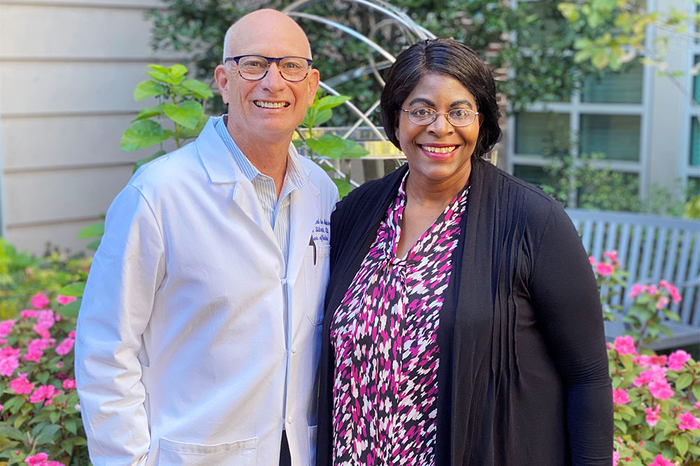 MUSC Hollings Cancer Center received its first Stand Up To Cancer (SU2C) grant that will make it part of the Southeastern Consortium for Lung Cancer Health Equity (SC3), a group that will focus on why lung cancer continues to be one of the leading causes of death among racially and ethnically diverse populations in the nation.

The $3 million four-year grant will facilitate health disparities research and scientific collaborations among researchers at three National Cancer Institute-designated cancer centers and form the SU2C Lung Cancer Health Equity Research Team. The grant is made possible by the support of Bristol Myers Squibb and is a part of SU2C’s Health Equity Initiative.

The initiative focuses on increasing diversity in cancer clinical trials, initiating advocacy group collaborations and awareness campaigns and funding research aimed at improving cancer outcomes and screening rates in medically underserved communities. In addition to Hollings, the team will include Massey Cancer Center at Virginia Commonwealth University and Lineberger Comprehensive Cancer Center at the University of North Carolina at Chapel Hill.

MUSC Hollings Cancer Center director Raymond N. DuBois, M.D., Ph.D., said he hopes this will be the first of many grants, and he looks forward to the expertise that researchers from all three NCI-designated centers will bring to bear on helping vulnerable minority populations. “SU2C funds and develops the newest and most promising cancer treatments to help patients today with the goal of accelerating the rate of new discoveries by connecting top scientists in unique collaborations to create breakthroughs. This consortium does just that,” he said.

“Its overarching goal is to identify and overcome barriers to lung cancer screening and to develop more precise strategies in identifying those at highest risk for developing lung cancer.”

Lung cancer continues to be one of the leading causes of illness and death among racially and ethnically diverse populations in the United States, especially for the Black population. Lung cancer is the second most common cancer, but is the leading cause of cancer deaths in both Black and white men and women. From 2012-2017, the lung cancer incidence rate was 18% higher in Black men than white men but 10% lower in Black women than white women. Although disparity trends in incidence are reversing, Black individuals with lung cancer continue to have more advanced stage of disease at diagnosis and lower survival rates compared with white individuals.

The team leader for the consortium is Robert Winn, M.D., director of the Massey Cancer Center, and the team’s co-leader is Marvella Ford, Ph.D., associate director of Population Sciences and Cancer Disparities Research at Hollings. Louise Henderson, Ph.D., a cancer researcher at Lineberger Comprehensive Cancer Center, will serve as the team’s principal investigator.

SC3 will target the lung cancer disparities among the Black population using a novel “cell-to-society” approach. The consortium will create a sustainable infrastructure to gather relevant biological, clinical, individual and contextual data needed to increase lung cancer screenings. Additionally, researchers will develop more precise methods for identifying those at the highest risk of lung cancer diagnoses and/or poor treatment outcomes.

Ford said the team has been carefully designed to pair basic scientists and population and behavioral scientists at each institution to create a study that’s highly translational and disparities focused. While some cancers do not have screenings for early detection, lung cancer does, so the urgency is to detect cancer earlier and save lives.

“Translational research — research that leads to direct human benefit — is easy to talk about. It is much harder to operationalize it,” said Ford. “There are different languages across medical and scientific disciplines, and we have to learn to see through the same lens to find real solutions. This is where the term cell-to-society comes in. We have designed a project that is truly translational by combining basic science and community outreach approaches.”

The project combines two different aims. One involves testing a navigation approach to lung cancer screening to address any of the potential barriers that could prevent people from getting screened. “Our previous work has shown that patient navigation can be a very effective strategy and can help to meet the needs of our medically underserved patients. Aim two is very interesting because we will be looking at samples taken from the people who were screened and analyzing them for genetic risk markers.”

The basic science component of the grant at Hollings will be led by Gerard Silvestri, M.D., a Hollings researcher and lung cancer pulmonologist. His career has been dedicated to the evaluation, management and improvement of outcomes for lung cancer patients. All three states — North Carolina, South Carolina and Virginia — are in the Tobacco Belt, with high rates of lung cancer and disparities, he said.

“No one has looked at genetic profiling specifically in the underserved communities,” Silvestri said. “What if we can find a cost-effective biomarker to show increased or decreased lung cancer risk to make better use of cancer screening resources?”

One goal of the grant is to develop a population-based collection of samples to look for new lung cancer biomarkers. Ford said collaborating with community partners, such as the Fetter Health Care Network, allows researchers to reach underserved communities to ensure equal representation. Biomarkers are a tool that doctors use to determine a patient’s risk of developing disease or a means of monitoring disease.

“No one has looked at genetic profiling specifically in the underserved communities. What if we can find a cost-effective biomarker to show increased or decreased lung cancer risk to make better use of cancer screening resources?” asked Silvestri, adding that this new consortium is an invaluable outcome of the SU2C grant.

“We will be sharing samples, resources and clinical data in order to make a meaningful difference in the underserved communities. As a consortium, we will be able to apply for larger grants in the future that we could not get if we were working on our own.”

As NCI-designated cancer centers, all three centers report high enrollment of underserved minorities into interventional trials, and both Hollings and Massey are part of an elite group of 14 centers across the country, each designated as a Minority and Underserved NCORP institution, an award given to institutions demonstrating long track records in recruiting minorities to clinical trials.

Ford said she looks forward to the expertise that the 13-member team will bring to bear. The team includes early career investigators at each institution to ensure they are developing the next generation of cancer researchers with expertise in health disparities. Eventually, the team plans to use the cell-to-society translational approach and lessons from the current project to address other cancer disparities.

Hollings has broad expertise in lung cancer screening and great depth in its health disparities research. “I think that combination of factors really makes us an attractive partner in this tripartite consortium,” Ford said “I think it is important for states that are facing similar disparities to unite to develop this consortium that gives us more leverage than we would have individually. We’re all facing the same battle, but we can fight it much better together.”

Founded in 1824 in Charleston, MUSC is the oldest medical school in the South as well as the state’s only integrated academic health sciences center with a unique charge to serve the state through education, research and patient care. Each year, MUSC educates and trains more than 3,000 students and nearly 800 residents in six colleges: Dental Medicine, Graduate Studies, Health Professions, Medicine, Nursing and Pharmacy. The state’s leader in obtaining biomedical research funds, in fiscal year 2019, MUSC set a new high, bringing in more than $284 million. For information on academic programs, visit musc.edu.

MUSC and its affiliates have collective annual budgets of $3.2 billion. The more than 17,000 MUSC team members include world-class faculty, physicians, specialty providers and scientists who deliver groundbreaking education, research, technology and patient care

MUSC Hollings Cancer Center is a National Cancer Institute-designated cancer center and the largest academic-based cancer research program in South Carolina. The cancer center comprises more than 100 faculty cancer scientists and 20 academic departments. It has an annual research funding portfolio of more than $44 million and a dedication to reducing the cancer burden in South Carolina. Hollings offers state-of-the-art diagnostic capabilities, therapies and surgical techniques within multidisciplinary clinics that include surgeons, medical oncologists, radiation therapists, radiologists, pathologists, psychologists and other specialists equipped for the full range of cancer care, including more than 200 clinical trials. For more information, visit hollingscancercenter.musc.edu.