Hoard of the rings: Unusual rings are a novel type of Bronze Age cereal-based product 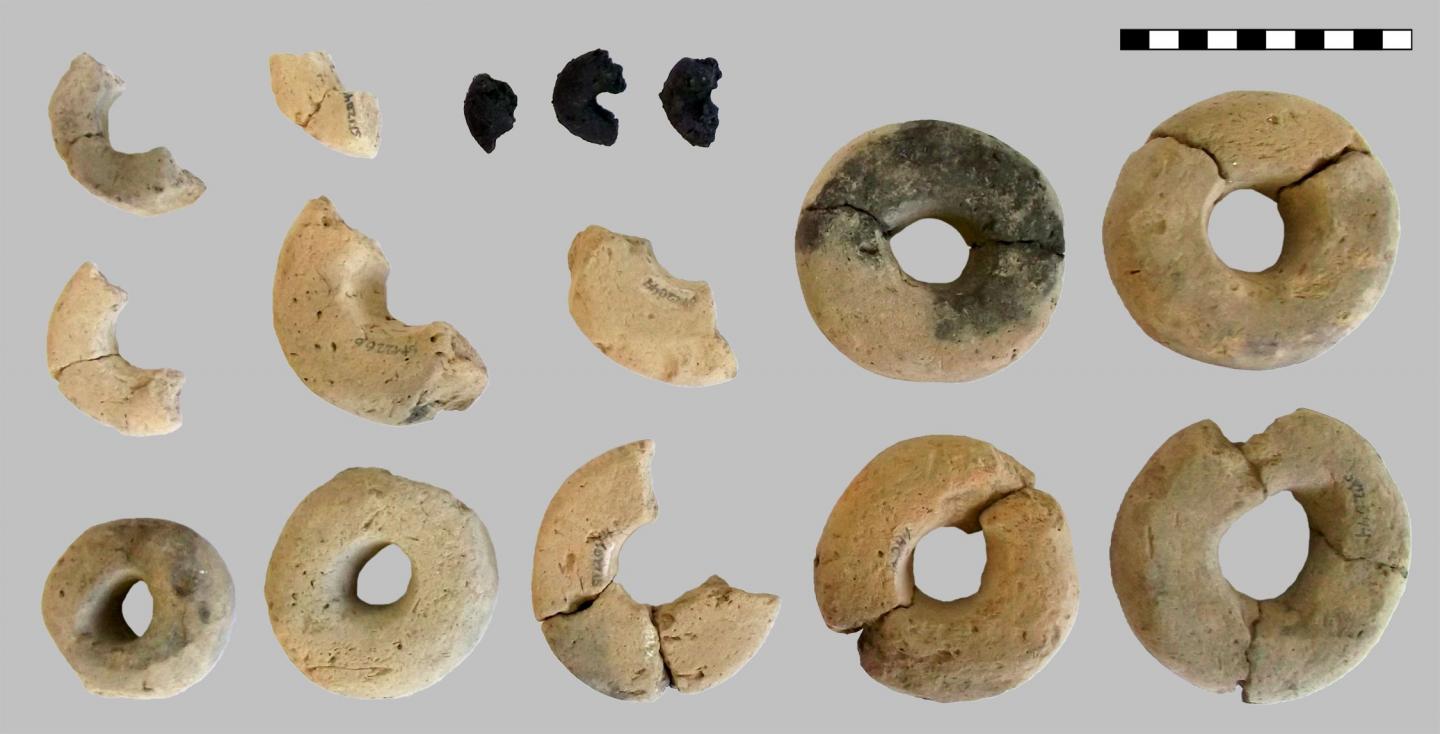 Strange ring-shaped objects in a Bronze Age hillfort site represent a unique form of cereal-based product, according to a study published June 5, 2019 in the open-access journal PLOS ONE by Andreas G. Heiss of the Austrian Archaeological Institute (ÖAW-ÖAI) and colleagues.

Agricultural practices are well known in the archaeological record, but less understood is how food was produced and prepared by ancient cultures. In this study, Heiss and colleagues describe unusual cereal-derived rings from the Late Bronze Age site of Stillfried an der March in Austria. Between 900-1000BCE, this settlement was a center of grain storage, and archaeological materials have been excavated from around 100 pits interpreted as grain storage pits.

This study focuses on the fragmentary charred remains of three ring-shaped objects, each around three centimeters across. Analysis confirms that they are made of dough derived from barley and wheat. The authors were able to determine that the dough was made from fine quality flour and then most likely shaped from wet cereal mixture and dried without baking. This time-consuming preparation process differs from other foods known from the site, leading the authors to suggest that these cereal rings may not have been made for eating.

These rings also bear a striking resemblance to clay rings interpreted as loom weights found in the same pit and may have been designed to imitate them. The unusual context of these cereal rings and the care that went into making them, suggests they may have been created for some unknown ritual purpose, thus expanding the list of ways the cultures of this time period are known to have used cereal products. Since such remains are scarce, the authors suggest that future studies sample more intensely for similar plant-based products that may typically be overlooked.

Funding: AGH, HPS, MBA, SMV, FA were supported by: ERC-CoG-2015, GA 682529 (PI: SMV) https://cordis.europa.eu/project/rcn/202606/factsheet/en. AGH was supported by: backaldrin – The Kornspitz Company https://www.backaldrin.com/. ML, MG, BB were supported by: Austrian Science Fund FWF P28005 (PI: ML) https://www.fwf.ac.at/. Evaluation of the archaeological context is funded by the Austrian Science Fund (FWF) project “Resource management, power and cult in Stillfried?” (P 28005, PI Michaela Lochner, 2015-2019), based at ÖAW-OREA. Analysis of the bread-like objects was partly funded by the European Research Council within the framework of the project ‘PLANTCULT’: Identifying the Food Cultures of Ancient Europe, under the European Union’s Horizon 2020 Research and Innovation Program (Grant Agreement No. 682529, Consolidator Grant 2016-2021. PI Soultana Maria Valamoti). Radiocarbon dating of the annular objects (sample ST 12050.4 B / Beta-486379) was funded by backaldrin – The Kornspitz Company. The funders had no role in study design, data collection and analysis, decision to publish, or preparation of the manuscript.

In your coverage please use this URL to provide access to the freely available article in PLOS ONE: http://journals.plos.org/plosone/article?id=10.1371/journal.pone.0216907

New study in ‘Science’: Why humans in Africa fled to the…