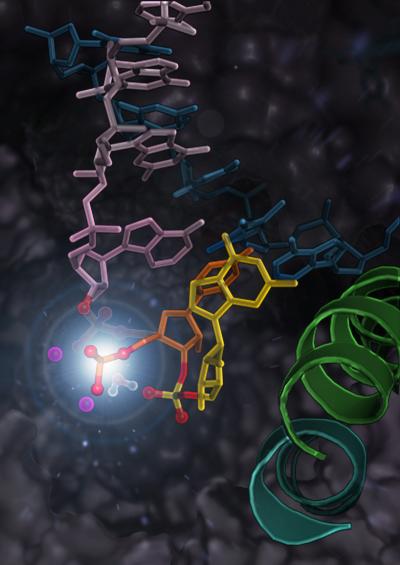 Credit: The Hong Kong University of Science and Technology

The message of life is encoded in our genomic DNA through transcription of messenger RNAs and translation of proteins to perform cellular functions. To ensure accurate transcription – a process that transcribes genomic DNA into messenger RNA by adding nucleotides one by one like letters in the alphabet, an enzyme called RNA polymerase II would synthesize and proofread messenger RNA to remove any mis-incorporated nucleotides that do not match with the DNA template.

While RNA polymerase II was known to be critical in ensuring the accuracy of transcription, it had been a long-standing puzzle as to how this enzyme accomplishes this difficult task. Scientists have always been intrigued to find out the underlying mechanisms, as that could offer insights on how errors could be made during this otherwise highly-accurate transcription process, which may lead to various human diseases.

“RNA polymerase II is like a molecular machine in the cell. Nature cleverly designs this machine to catalyze two distinct chemical reactions in a single active site without getting mixed-up. While normal RNA synthesis requires specific amino acid residues of RNA polymerase II, we found that the removal of the mismatched nucleotide does not rely on any amino acid residues. This molecular machine seamlessly coordinates these two functions in one active site,” said Prof. Huang. “Our discovery offers valuable insights into how transcription may go wrong in ageing and diseased cells, and to what extent transcriptional errors may lead to various human diseases.”

“Our work is only possible with the large-scale high-performance computing resources mostly provided by the Shaheen Supercomputer in collaboration with King Abdullah University of Science and Technology (KAUST)”, Prof. Huang added. “Our quantum mechanics and molecular dynamics calculations consumed 20 million CPU core hours in total.”

[1] This paper is a follow-up work of Prof. Huang’s previous publication to elucidate the mechanisms of RNA polymerase II’s backtracking upon mis-incorporation in Nature Communications

Scienmag Jun 25, 2019
The Graphene Flagship participates in a sounding-rocket launch in collaboration with the European Space Agency to…

Scientists discover potential breakthrough in the understanding of…