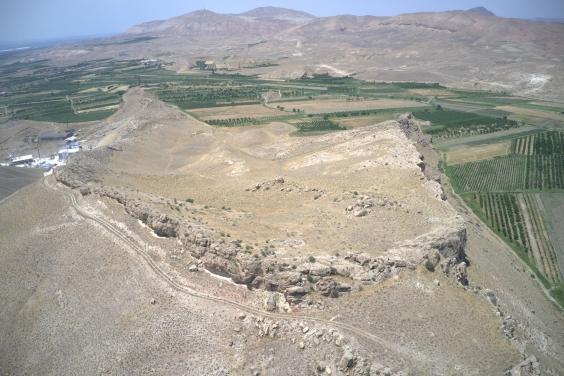 A team of researchers and students from HKU unearthed huge storage jars, animal bones and fortress walls from 3,000 years ago in Armenia as they initiated the Ararat Plain Southeast Archaeological Project (APSAP) during the summer of 2019.

APSAP is a collaborative research project between HKU and the Institute of Archaeology and Ethnography of the Republic of Armenia’s National Academy of Sciences. Dr. Peter J. Cobb, assistant professor in the Faculties of Education and Arts, directs the project in collaboration with Artur Petrosyan and Boris Gasparyan of the Armenian Institute. The Institute’s Hayk Azizbekyan helped coordinate all aspects of the project.

The project, expected to last for at least five years, aims at understanding human life and mobility in the ancient landscapes of the Near East. It investigates the area around Vedi, Armenia, at the southeast edge of the wide and fertile Ararat Plain.

This area has been a contact point between Turkey, Iran (Persia) and Russia over the past few centuries. It has always been an important transportation node, including on the famous Silk Road. Today, Armenia is one of the countries on the Belt and Road initiative.

“The Vedi river valley has formed an important transportation corridor throughout history and we want to understand how people lived in and moved through this landscape in the past,” said Dr Cobb.

HKU is one of the first universities from East Asia to help lead a major archaeological excavation in the Near East, a region traditionally receiving foreign research attention from only European and North American institutions. The international team this summer consisted of 15 researchers and students from Armenia, mainland China, Hong Kong, Turkey, and the United States.

The main focus was a major excavation at a site in the middle of the valley called the Vedi Fortress. The site preserves huge ruined fortification walls up to four meters high, with a central rectangular defensive tower. Two long series of fortification walls protected an inner “keep” of a citadel. The walls date to the Late Bronze and Iron Ages of 1500-500 BC. The site has been reused multiple times, including during the Medieval period of 800 years ago.

The research team dug three trenches on the site, making exciting finds of huge storage jars, walls of buildings, and a variety of fascinating artifacts including animal bones discarded from meals.

Undergraduate History major Ivi Fung said: “When I was identifying a pottery fragment in the sieve, I imagined what Bronze Age people put into the potteries; when I was surprised by a large skeleton of an animal head, I imagined how they got their food; when I brushed the stone wall, I imagined whom they were defending against.”

Her professor, Dr Cobb, added: “Archaeology allows us to learn about the daily life of humans in this region as we study everyday items like the bowls and cups used during meals. The trip also provided chances for HKU students to have new experiences and adventures. As one example, some HKU students had never climbed a tree before, but they had an opportunity in this rural part of the world.”

Students from HKU and other universities visited the site from late May to late July and worked together with Armenian archaeologists. They hiked to discover new sites, excavated some of them, and studied the ancient pottery and other objects found at the sites.

In the summer of 2020, the archaeological expedition to Armenia will be an official HKU experimental learning class: Cultural Heritage and Information in the Field (BBED6796). A collaborative teaching project with Ani Avagyan of the Education Department of the Armenian National Gallery will provide opportunities for HKU students to introduce archaeology to local schoolchildren.

Dr. Cobb teaches courses on archaeological methods and theories and the archaeology and history of the ancient world, including experiential learning classes in Myanmar and Armenia for the Faculty of Education, and the eastern Mediterranean for the School of Humanities, Faculty of Arts, HKU. He conducts archaeological fieldwork in Laos, Armenia, and Turkey, and is the director of the Ararat Plain Southeast Archaeological Project (APSAP) in collaboration with the Armenian Institute for Archaeology and Ethnography. His research focuses on the Late Bronze and Iron Ages of the eastern Mediterranean.

Dr. Cobb is a specialist in the analysis of ancient ceramics and landscapes, as well as digital humanities methods in archaeology. He is a consulting scholar for the Center for the Analysis of Archaeological Materials (CAAM) at the Penn Museum of the University of Pennsylvania, where he taught prior to joining HKU.

Discovery at ‘flower burial’ site could unravel mystery of Neanderthal…

Scienmag Jul 2, 2019
A new paper from University of Toronto Engineering researcher outlines a simple, yet powerful model to understand…