Histamine, which is a mediator of anaphylactic reactions, exacerbates symptoms by releasing HMGB1 from vascular endothelial cells 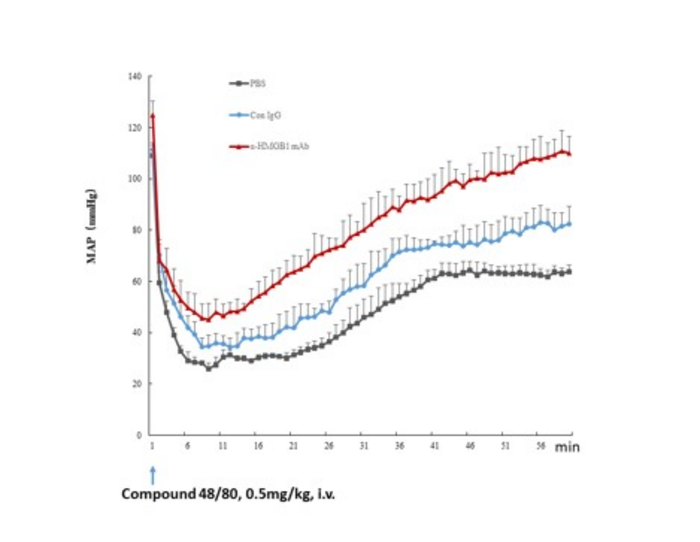 Vascular endothelial cells are well known to play an important role in regulating tissue blood flow and metabolism, regulating blood coagulation and fibrinolysis, and forming a site for inflammatory reactions. Among the factors that act on endothelial cells, histamine is stored in the granules of tissue cells called mast cells and circulating basophils, and released into surrounding tissues in response to stimulation. In the case of hay fever, the sensitizing antigen molecule stimulates the secretion of histamine. Histamine has the property of strongly stimulating vascular endothelial cells, in particular causing vasodilation and vascular hyperpermeability, which widens the gaps between vascular endothelial cells. In an anaphylactic reaction, histamine is released extensively and systemically, which results in severe symptoms, such as hypotension and dyspnea.

The high mobility group box-1 (HMGB1) is a nuclear factor that is common to all cell nuclei and is released extracellularly in response to stimulation and cell tissue damage. HMGB1 has the property of amplifying the inflammatory reaction in various ways, not only directly acting on receptors called RAGE and TLR-4 to induce inflammatory reactions, but also forming complexes with inflammatory cytokine IL-1β and chemokine CXCL12 in order to enhance the action of these factors. In this study, we clarified for the first time in the world that HMGB1 was released extracellularly when histamine, which is an important signaling substance and mediator of allergic reactions, acts on cultured vascular endothelial cells. This histamine-induced HMGB1 release is mediated by the typical H1 subtype receptor among the four histamine subtype receptors, and this release was suppressed by the addition of catecholamines, such as adrenaline, which is used in anaphylactic treatment. The administration of compound 48/80 systemically activated histamine-rich mast cells, indicating that an anaphylactic-induced hypotensive reaction can be stimulated. It was found that blood HMGB1 levels increased by 4–5 times in rats that had this hypotensive reaction. When administering the anti-HMGB1 antibody to these rats, then it was found that the degree of hypotension was attenuated, and a faster recovery was achieved. These results suggested that the anti-HMGB1 antibody could be used for the treatment of anaphylactic shock.

Intramuscular adrenaline therapy has saved the lives of many patients with anaphylactic shock. However, the current status is such that a certain number of patients die every year from severe anaphylactic reactions caused by drugs, food, and bee venom. We anticipate that additional therapies will be added to intramuscular adrenaline therapy by establishing the safety of anti-HMGB1 antibody therapy.

The standard treatment for anaphylactic shock is an intramuscular injection of a constant dose of adrenaline. In this study, we found that histamine, which is a major active substance that induces shock, has the effect of releasing HMGB1, which is a representative DAMP. Therefore, anti-HMGB1 antibodies may become a new therapeutic option.

The high mobility group box-1 (HMGB1) is a protein that binds to chromosomal DNA in the nucleus of cells and plays an important role in maintaining DNA structure, regulating gene transcription, and repairing DNA. Meanwhile, HMGB1, which is extracellularly released in response to cell/tissue damage, is thought to influence various inflammatory actions.

DAMP is the abbreviation for “damage-associated molecular pattern.” There are many types of molecules in cells, but it has been shown that there is a group of molecules among such molecules that act to enhance or suppress the inflammatory reaction, a role that is different from its action within the cell, when those molecules are released extracellularly due to stress or cell damage. These molecules are collectively referred to as DAMPs.

Mast cells present in living tissues and basophils, which are a type of leukocyte in blood, store a large amount of histamine, which is a physiologically active amine, in intracellular granules. The body may produce IgE-class antibodies against certain antigenic substances. IgE antibodies have the property of binding to the cell surfaces of mast cells and basophils, and in sensitized humans, the activation of both cells occurs systematically when antigenic substances enter the blood in large amounts. As a result, histamine in storage granules is released extracellularly, which causes strong systemic vasodilation (hypotension), airway constriction (dyspnea), generalized wheals with itching, and abdominal pain. This antigen-induced immediate systemic allergic reaction is called anaphylaxis.

These are cells that line the inner lining of all blood cells. All vascular beds, from large blood vessels to capillaries, are lined with these cells, and blood that flows through the blood vessels comes into contact with endothelial cells. Vascular endothelial cells are known to play an important role in regulating tissue blood flow and metabolism, regulating blood coagulation and fibrinolysis, and forming a site for inflammatory reactions.