Hippopotamuses are rather vocal animals. Their “wheeze honk” calls can be heard over long distances, leading researchers to suspect the calls play an important role in maintaining social groups. Now, a study in the journal Current Biology on January 24 shows that hippos recognize each other’s voices. They also respond less aggressively to the calls of a neighbor compared to those of a stranger. 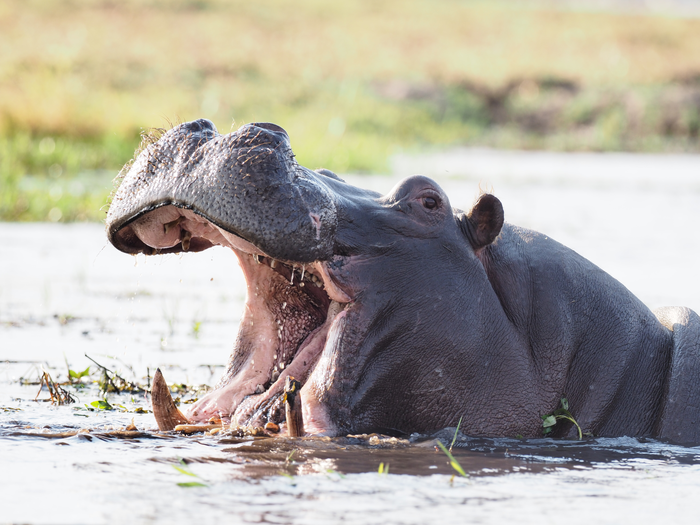 Hippopotamuses are rather vocal animals. Their “wheeze honk” calls can be heard over long distances, leading researchers to suspect the calls play an important role in maintaining social groups. Now, a study in the journal Current Biology on January 24 shows that hippos recognize each other’s voices. They also respond less aggressively to the calls of a neighbor compared to those of a stranger.

“We found that the vocalizations of a stranger individual induced a stronger behavioral response than those produced by individuals from either the same or a neighboring group,” says Nicolas Mathevon (@MathevonNicolas) of University of Saint-Etienne, France. “In addition to showing that hippos are able to identify conspecifics based on vocal signatures, our study highlights that hippo groups are territorial entities that behave less aggressively toward their neighbors than toward strangers.”

Mathevon and his colleagues are interested in bioacoustics, the study of how animals exchange information through sound. They’re especially interested in communication networks, in which multiple individuals send and receive information all at once.

Hippos are tough animals to study because it can be difficult to identify and locate individuals. The researchers managed it by working in the Maputo Special Reserve, Mozambique, an area that includes several lakes inhabited by hippos.

First, Mathevon and his team recorded calls representative of each hippo group. Then, the researchers played the recordings back to all the other hippos to see how they’d react to the calls of their own group (familiar) versus another group from the same lake (neighbor) or a more distant group (stranger).

The researchers found that hippos respond to hearing a played-back call by responding vocally, approaching, and/or spraying dung. Interestingly, the response varied depending on whether they were hearing hippos that they knew or ones they didn’t.

The overall intensity of the hippos’ response grew when they heard a stranger. The hippos were also more likely to spray dung, a territorial marking behavior, when they heard the sound of a hippo that didn’t belong to their group.

When the hippos are in the water, they look pretty inactive, Mathevon explains. But these results show that they really are paying close attention to their surroundings. When they heard the call of another hippo played from the shore, they responded right away. “The responses to the sound signals we broadcast were very clear, and we did not expect that,” he says.

The findings offer useful insights into hippo communication and social groups. They also have important implications for conservation policy, the researchers say. For instance, they explain, animals often are relocated to maintain local populations at healthy sizes. But the findings suggest that precautions are needed before making that kind of move.

“Before relocating a group of hippos to a new location, one precaution might be to broadcast their voices from a loudspeaker to the groups already present so that they become accustomed to them and their aggression gradually decreases,” Mathevon says. “Reciprocity, in which the animals to be moved become accustomed to the voices of their new neighbors before they arrive, could also be considered.”

In future studies, the researchers hope to learn more about what hippos communicate through their calls. They’ll explore how they recognize the sound of other hippos and whether the voices give away other characteristics, such as size, sex, or age.

Current Biology (@CurrentBiology), published by Cell Press, is a bimonthly journal that features papers across all areas of biology. Current Biology strives to foster communication across fields of biology, both by publishing important findings of general interest and through highly accessible front matter for non-specialists. Visit http://www.cell.com/current-biology. To receive Cell Press media alerts, contact [email protected].