Beaver fur was a symbol of wealth and an important trade item in 10th Century Denmark, according to a study published July 27, 2022 in the open-access journal PLOS ONE by Luise Ørsted Brandt of the University of Copenhagen and colleagues. 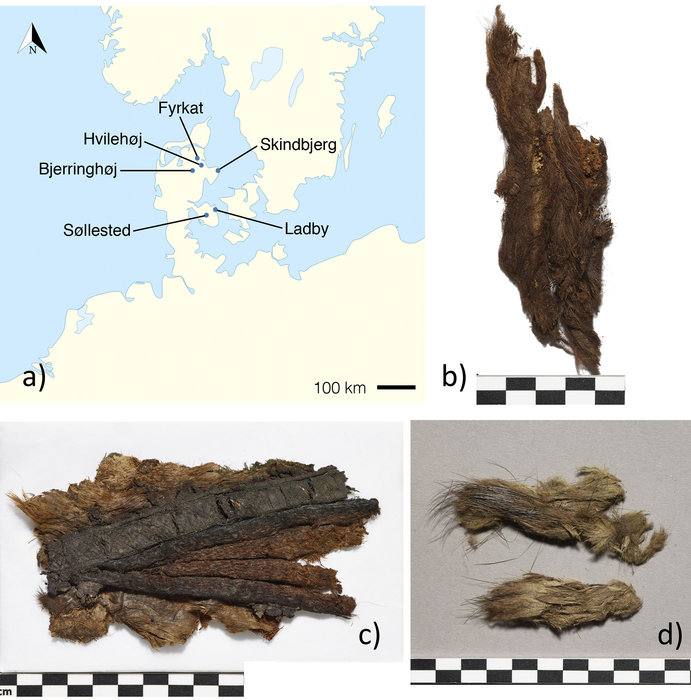 Beaver fur was a symbol of wealth and an important trade item in 10th Century Denmark, according to a study published July 27, 2022 in the open-access journal PLOS ONE by Luise Ørsted Brandt of the University of Copenhagen and colleagues.

Written sources indicate that fur was a key commodity during the Viking Age, between 800-1050 CE, but fur doesn’t often survive well in the archaeological record, so little direct evidence is available. Previous reports have used the microscopic anatomy of ancient fur to identify species of origin, but this method is often inexact. All in all, not much is known about the kinds of furs the Vikings preferred.

In this study, Brandt and colleagues analyzed animal remains from six high-status graves from 10th Century Denmark. While no ancient DNA was recovered from the samples, perhaps due to treatment processes performed on furs and skins and probably due to preservation conditions, identifiable proteins were recovered by two different analytical techniques. Grave furnishings and accessories included skins from domestic animals, while clothing exhibited furs from wild animals, specifically a weasel, a squirrel, and beavers.

These findings support the idea that fur was a symbol of wealth during the Viking Age. The fact that beavers are not native to Denmark suggests this fur was a luxury item acquired through trade. Some clothing items included fur from multiple species, demonstrating a knowledge of the varying functions of different animal hides, and may have indicated a desire to show off exclusive furs. The authors note the biggest limiting factor in this sort of study is the incompleteness of comparative protein databases; as these databases expand, more specific identifications of ancient animal skins and furs will be possible.

The authors add: “In the Viking Age, wearing exotic fur was almost certainly an obvious visual statement of affluence and social status, similar to high-end fashion in today’s world. This study uses ancient proteins preserved in elite Danish Viking burials to provide direct evidence of beaver fur trade and use.”

In your coverage please use this URL to provide access to the freely available article in PLOS ONE: https://journals.plos.org/plosone/article?id=10.1371/journal.pone.0270040

Funding: This work was supported by the Carlsberg Foundation under Grant CF15-0573 (Fur and skin trade in Viking and medieval Denmark – A biomolecular investigation of archaeological fur, skin, and leather from Denmark and its contribution to the understanding of the Viking and medieval fur and skin trade), the Danish National Research Foundation under the Grant DNRF119 (Centre of Excellence for Urban Network Evolutions) and Grant DNRF128 (PROTEIOS), and the Fashioning the Viking Age project funded by the VELUX FOUNDATION’s Museum Programme. Prof. Jesper Velgaard Olsen at the Novo Nordisk Center for Protein Research is thanked for providing access and resources, which was also funded in part by a donation from the Novo Nordisk Foundation (grant no. NNF14CC0001).