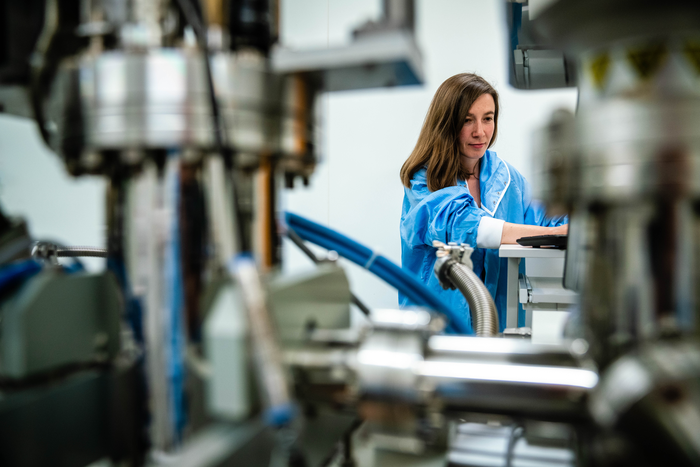 Scientists from the Natural History Museum, London (United Kingdom), and the ESRF, the European Synchrotron, Grenoble (France), have found that some pollen has survived mass extinctions thanks, in part, to its nanofoam wall structure. This may explain why the survival of certain plants. It is the first time scientists have described a biological nanofoam structure. Their results are published in Science Advances.

Pollen grains protect plant’s genetic material from environmental threats during reproduction and are therefore vital to the survival of plants. For this purpose, the earliest land plants evolved a tough outer wall of their pollen grains, produced from a highly resistant organic polymer, known as sporopollenin. Thanks to this shield, plants like conifer trees, which have been around for 300-400 million years, have survived several mass extinctions, including the one that wiped out dinosaurs, at the end of the Cretaceous. Today, scientists have found out how conifer pollen has adapted, thanks to experiments carried out at the ESRF.

A team of scientists from the ESRF and the Natural History Museum (NHM), including palynologists, material scientists and physicists, joined forces to discover the pollen wall’s secrets. They chose to analyse conifer pollen as it has a longer evolutionary history than that of flowering plant pollen and could be compared very effectively with fossil material from the NHM collections.

They carried out experiments on the pollen wall using X-ray nanotomography and X-ray fluorescence nano-imaging on beamline ID16A at the ESRF. Alexandra Pacureanu, researcher at the ESRF and co-corresponding author of the paper, explains the importance of these techniques in getting a faithful picture of pollen: “The unique capabilities of these technologies enabled us to probe for the first time the nanoscale 3D structure and the native elemental composition in intact grains, without resorting to staining, embedding in resin or sectioning”. For Stephen Stukins, palynologist at the Natural History Museum in London (United Kingdom), and also co-corresponding author, it was his first time at a synchrotron: “The experiment was challenging as it required samples of less than 100 microns in size and under cryogenic conditions. It was a very successful experiment because in the team we had four scientists from the ESRF who brought in their expertise on all the technical aspect”, he says.

The data showed, for the first time, a nanofoam structure made by nature. “The foam is an adaptation to protect the genetic code of the organism. It has helped the plant group survive all the environmental and climatic aggressions that have occurred during the last few hundred million years: chemical and physical attacks, acid rain or UV radiation, as examples”, explains Stukins. The team also used the Atomic Force Microscope (AFM) at the ESRF to compare the pollen wall with other natural and synthetic foams and found that the mechanical properties were consistent across all materials and therefore confirm the nanofoam hypothesis.

“This new quantitative characterisation of the pollen wall is important for present and future applications of this material”, says Marie Capron, materials scientist at the ESRF. The pharmaceutical industry is researching pollen as a drug encapsulation and targeted release mechanism, so the new findings could potentially help with understanding this process. The nanofoam insight may also serve the scientific community using pollen as a template to design biomimetic materials. The next step for the team is to find out more about the role that the foam carries out in the pollen, how it pollinates and why some pollen has nanofoam and others do not.

A biological nanofoam: The wall of coniferous bisaccate pollen