Disease reservoirs may contribute to worldwide decline of frog populations 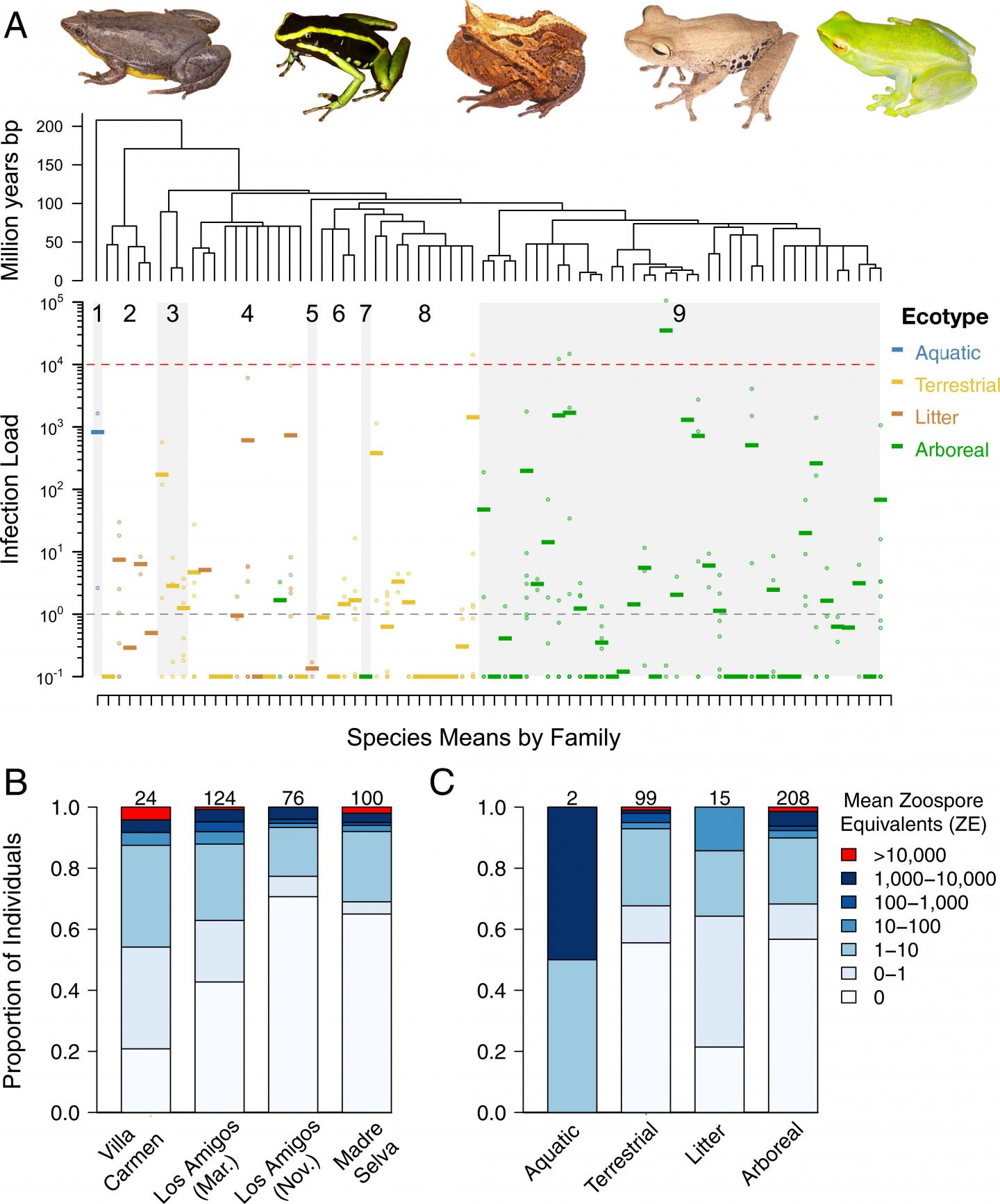 In the worldwide decline of frog populations due to fungal disease, some areas were thought to be relatively free from infection, because of their climate. But even locations with low rates of death may harbor high concentrations of infected frogs, according to a new study in the open-access journal PLOS One by Alison Davis Rabosky of the University of Michigan in Ann Arbor and colleagues. The results suggest that important reservoirs of infection may exist well beyond areas with high rates of mortality for this ecologically important disease.

Chytridomycosis is a fungal disease of amphibians, which in recent years has decimated populations of frogs throughout the world. The disease is caused by infection with Batrachochytrium dendrobatidis (Bd), which is considered a “cold-loving” fungus because its optimal temperature range is that of cooler regions. The populations most severely affected by chytridomycosis have been found in moderate- to high-elevation areas, including the mountains of Central and South America, Australia, and the Sierra Nevada of the United States.

To better understand the infection dynamics of Bd, the authors tested for infection in frogs from the Peruvian Amazon, a lowland area that has not experienced frog declines and has been thought to be free of Bd disease because of its warmer temperatures. Contrary to expectation, they found that between 24 percent and 46 percent of frogs across 80 species were infected with Bd, largely independent of seasonal effects, frog species, or other factors. Despite infection by the fungus strain that causes disease globally, frogs showed no signs of disease. Such populations may act as reservoirs for disease outbreaks among populations that are less resistant or in environments more conducive to infection, the authors suggest.

“We found no detectable relationship between which species were infected, in what types of environment they lived, and how high their infection loads were,” adds Davis Rabosky. “Chytrid just seemed to be everywhere.”

In your coverage please use this URL to provide access to the freely available article in PLOS ONE: https://journals.plos.org/plosone/article?id=10.1371/journal.pone.0222718

The pathway to Parkinson’s takes a surprising twist

Scienmag Nov 11, 2019
Credit: Laboratory of Molecular and Cellular Neuroscience at The Rockefeller University In…