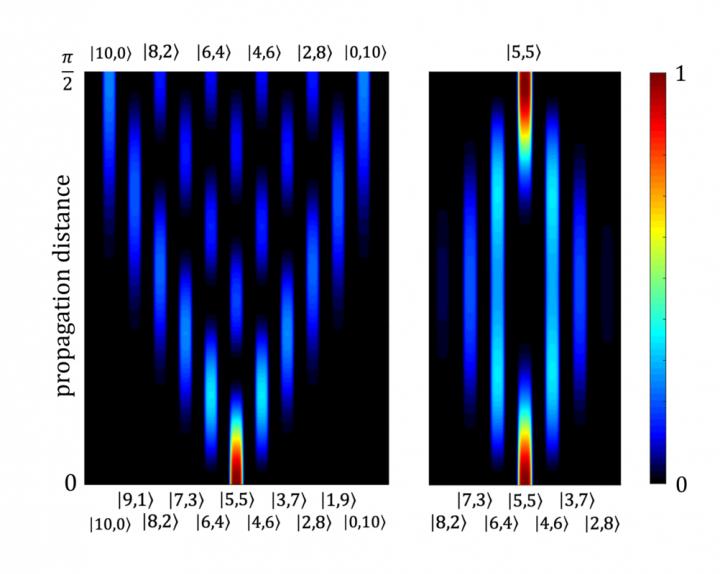 In physics, a very intuitive way of describing the evolution of a system proceeds via the specification of functions of the spatiotemporal coordinates. Yet, there often exist other degrees of freedom in terms of which the physical entities pertaining to a variety of structures can be seen to evolve and that are not amenable to a description via spatial coordinates.

This is precisely the idea of synthetic dimensions: coexisting frameworks in which a wavefunction, defined in specific degrees of freedom, takes another form that “lives” in a domain with much higher dimensions than what the structures’ (apparent) geometry would suggest. This approach is rather appealing as it can be used to access and probe dimensions beyond our 3-dimensional world, e.g. 5-dimensional or 8-dimensional, etc.

In our recent work we have shown that a multitude of high-dimensional synthetic lattices naturally emerge in (abstract) photon-number space when a multiport photonic lattice is excited by N indistinguishable photons (see Fig. 1). More precisely, the Fock-representation of N-photon states in systems composed of M evanescently coupled single-mode waveguides yields to a new layer of abstraction, where the associated states can be visualized as the energy levels of a synthetic atom. In full analogy with ordinary atoms, such synthetic atoms feature allowed and disallowed transitions between its energy levels.

These concepts have far-reaching implications as they open a route to the simultaneous realization of, in principle, an infinite number of lattices and graphs with different numbers of nodes and many dimensions. This possibility is rather appealing for realizing parallel quantum random walks where the corresponding walkers can perform different numbers of steps on different, planar and nonplanar, multidimensional graphs that depend on the number of photons involved in each process. These quantum walks can be implemented, for instance, by exciting a simple four-waveguide system with a standard quantum light source comprising infinite coherent superpositions of states, e.g. a coherent state |α>(Fig. 1). Similarly, the symmetric excitation of a two-waveguide system with identical photons, when properly viewed in abstract space, feature the phenomena of discrete diffraction and Bloch oscillations (Fig. 2).