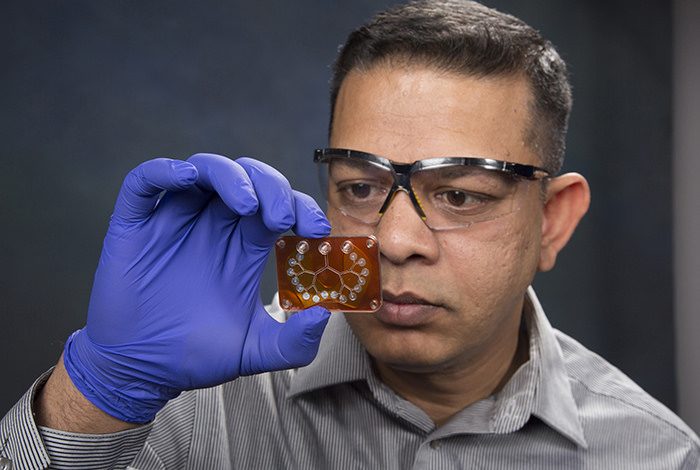 LOS ALAMOS, N.M., Aug. 24, 2016—Nine Los Alamos National Laboratory innovations were selected as finalists for the 2016 R&D 100 Awards, which honor the top 100 proven technological advances of the past year as determined by a panel selected by R&D Magazine. The finalists, with projects covering energy, computing, health care, and materials, demonstrate the continued success of Laboratory researchers in technical innovation for national security science.

“The Laboratory’s R&D 100 Award finalists represent the breadth of scientific innovations supporting the Lab’s broad national security missions,” said Carol Burns, the Deputy Principal Associate Director of the Science, Technology and Engineering directorate. “This year’s honorees are the result of partnerships with private industry, universities and other national laboratories, and they illustrate many possible paths from scientific creativity to deployment of solutions. It is impressive that some already show promise of impact in commercial markets.”

The Los Alamos finalist projects are:

“We are hopeful that the R&D 100 technologies nominated will be commercialized and spur industry development to be new products or services in the global marketplace,” said Dave Pesiri, director of the Richard P. Feynman Center for Innovation. “In fact, some of these nominees have already partnered with industry to commercialize their technology—we expect that many others will follow suit.”

This year’s R&D 100 winners will be announced November 3.

Carbon Capture Simulation Initiative (CCSI) Toolset is a suite of computational tools and models that supports and accelerates the development, scale-up and commercialization of carbon dioxide capture technology to reduce domestic and global carbon dioxide emissions. The invention addresses key industrial challenges, including developing a baseline for the uncertainty in simulation results. It is the only suite of computational tools and models specifically tailored to help maximize learning during the scale-up process in order to reduce risk.

Entropy Engine is a random number generator that addresses a key fundamental flaw in modern crypto systems—predictability. The invention strengthens the foundation of computer security by producing an inexhaustible supply of pure random numbers at speeds of 200 million bits per second. Entropy Engine uses the unique properties of quantum mechanics to generate true entropy (random numbers) in a way that makes it immune from all external influences.

Hybrid Optimization Software Suite (HOSS) provides a simulation platform to conduct “virtual experiments” that help model and analyze materials phenomena that cannot be readily produced or studied in a laboratory or real-world setting. It is the first to combine finite-element and discrete-element methods with an all-regime computational fluid dynamics solver to generate accurate simulations of complex multi-physics problems, such as material deformation, fracture and failure analyses.

MarFS is a thin software layer that makes the technical advances generated by cloud-based storage available to classical POSIX use cases. The acronym “MarFS” is a combination of the word mar (Spanish for “sea,” alluding to the data lake) and File System. MarFS was written specifically to leverage cloud storage technology for high-performance parallel cold storage. The software maps directories and files in legacy systems, including those used by companies that handle vast amounts of data, to cloud-based object storage. MarFS is so flexible that it can adapt to new storage technologies as they are developed.

PathScan provides security analytics for computer network attack detection. Traditional computer network security tools, which search for malware or network signatures, insufficiently protect from expensive data breaches. Traditional defense mechanisms—perimeter controls and end-point antivirus protection—cannot keep pace with these increasingly innovative and sophisticated adversaries. Rather than detecting something that “looks” like a cyberthreat, PathScan searches for anomalous communications behavior within the network. The invention performs a statistical analysis of abnormal behavior across a network and identifies the lateral, reconnaissance and data staging behaviors of attackers.

Photonic Band Gap Structures enable a new generation of high-current, high-power accelerators. Today, there are more than 30,000 particle accelerators operating around the world for use in basic science and applications in medicine, energy, environment, national security and defense. These accelerators use electromagnetic fields to propel charged particles to nearly the speed of light, containing the particles in well-defined beams. Los Alamos developed photonic band gap structures to improve the quality and intensity of the beams.

Pulmonary Lung Model (PuLMo) is a miniature, tissue-engineered lung developed to revolutionize the screening of new drugs or toxic agents. Current screening methods may not accurately predict response in humans. PuLMo also could be used as a platform to study the flow dynamics of particles inside a lung for applications in drug delivery and particle/pathogen deposition studies. PuLMo has the potential to enable screening of new drugs more effectively by improving the reliability of pre-clinical testing and saving time, money and lives.

Turning Windows and Building Facades into Energy-Producing Solar Panels: Engineered Quantum Dots for Luminescent Solar Concentrators. These revolutionary semitransparent windows contain highly emissive semiconductor nanocrystals (quantum dots) that collect sunlight for photovoltaics and provide a desired degree of shading. The material can turn windows and building facades into electrical generators of nonpolluting power. The nontoxic dots absorb the sunlight, re-emit it at a longer wavelength and waveguide it towards edge-installed photovoltaic cells to produce electricity. This technology can transform once-passive building facades into power-generation units, which can be particularly useful in densely populated areas.

Los Alamos submitted the joint entry with the University of Milano-Bicocca as a co-developer. Victor I. Klimov of Physical Chemistry and Applied Spectroscopy led the team of Kirill Velizhanin of Physics and Chemistry of Materials, Hunter McDaniel (former Los Alamos Postdoctoral Researcher, currently with UbiQD LLC), Sergio Brovelli and Francesco Meinardi (University of Milano-Bicocca).

Virtual Environment for Reactor Applications (VERA) provides coupled, high fidelity, software capabilities to examine light water reactors’ operational and safety performance-defining phenomena at levels of detail previously unattainable. The multiphysics simulation toolkit covers the range of physics necessary to predict the performance of currently operating commercial nuclear power reactors. This capability enables users to study, mitigate and manage the challenge problems identified by the industry to a level of understanding that is not available through other toolsets. VERA supports options for both high performance computing and industry-sized computing clusters in a manner that is accessible and easily understood for most users.

The prestigious “Oscars of Invention” honor the latest and best innovations and identify the top technology products of the past year. The R&D 100 Awards span industry, academia and government-sponsored research.

Since 1978 Los Alamos has won 132 of the prestigious R&D 100 Awards. The Laboratory’s discoveries, developments, advancements and inventions make the world a better and safer place, bolster national security and enhance national competitiveness.

Read more about the Laboratory’s past R&D 100 Awards.