Annapolis, MD; February 16, 2022—A common refrain among biologists holds that the majority of Earth’s plant and animal species remain undiscovered. While many of those species inhabit narrow or hard-to-reach ranges, others may in fact be hiding right under our noses. 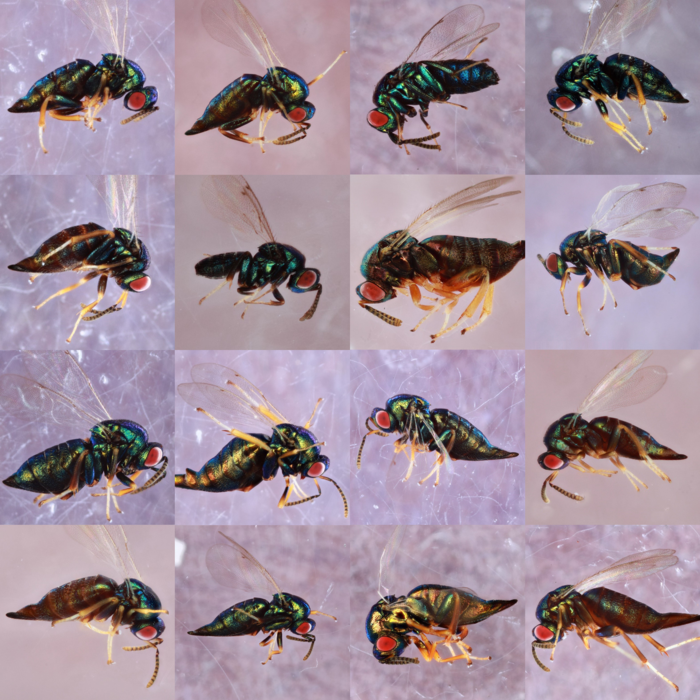 Annapolis, MD; February 16, 2022—A common refrain among biologists holds that the majority of Earth’s plant and animal species remain undiscovered. While many of those species inhabit narrow or hard-to-reach ranges, others may in fact be hiding right under our noses.

Take Ormyrus labotus, a tiny parasitoid wasp known to science since 1843. It has long been considered a generalist, laying its eggs in more than 65 different species of other insects. But a new study published today in Insect Systematics and Diversity suggests that the wasps currently called Ormyrus labotus are actually at least 16 different species, identical in appearance but genetically distinct.

It’s not unusual, especially with advancing genetic techniques, to discover “cryptic” species within one known insect species, but the number of those found within Ormyrus labotus underlines the importance of seeking out the world’s “hidden diversity,” says Andrew Forbes, Ph.D., associate professor of biology at the University of Iowa and senior author of the study.

“We know so much from ecology about how important even the smallest species can be to an ecosystem,” he says, “such that uncovering this hidden diversity—and, maybe more importantly, understanding the biology of each species—becomes a critical component of conservation and maintenance of ecosystem health.”

Parasitoid wasps lay their eggs on or in other insects and arthropods, and they commonly specialize in parasitizing a small number of host species, or even just one. Meanwhile, a wide variety of insects lay their eggs on plants where their larvae hatch and then induce the plant to form a protective structure called a “gall” around the larvae. Wasps in the genus Ormyrus parasitize these gall-forming insects.

For a separate research project between 2015 and 2019, Sofia Sheikh and Anna Ward, both graduate students in Forbes’ lab, collected galls formed on oak trees and observed the insects that emerged. They noticed that wasps emerging from a large diversity of gall types all matched the description of Ormyrus labotus, and this got the researchers wondering.

“It seemed highly unusual for one parasitoid species to be able to exploit such a wide and dynamic set of hosts,” says Sheikh, a master’s student at the time in Forbes’ lab (now a Ph.D. student at the University of Chicago) and lead author on the new study.

To test whether the wasps they collected were all truly one species or instead a band of look-alikes, Sheikh, Ward, and Forbes extracted DNA samples from each of the wasp specimens that emerged from the oak galls and analyzed the degree of genetic variation between them, with assistance from collaborators at Rice University and the U.S. Department of Agriculture. Then they combined this genetic analysis with data on the wasps’ physical attributes and ecological factors—e.g., which type of oak galls they emerged from, at what time of year, and so on—to place the wasps in groups of likely separate species.

The final result? The collected wasps that originally appeared to be Ormyrus labotus instead comprise at least 16 distinct species, and possibly as many as 18.

The Hunt for Cryptic Species

In their review of other research, the team found several other studies that had uncovered cryptic species within purported generalist species but none that had found so many at once. And it’s possible more distinct species that would otherwise match O. labotus remain to be found, the researchers say, because the original collection of oak-gall specimens that Sheikh and Ward conducted wasn’t designed to encompass all known O. labotus hosts.

For now, Ormyrus labotus will remain a “species complex,” with these newly delineated species known to exist but not yet formally described and named. Forbes says his lab “only dabbles” in formal taxonomy, but all specimens from the study have been preserved and are available for other researchers who want to conduct a taxonomic revision of the Ormyrus genus. “If someone wants to take a crack at naming these species of Ormyrus, we’re ready to help however we can,” he says.

Until then, the current findings underscore the importance of fundamental biodiversity research and its potential implications. For example, if O. labotus were ever enlisted for control of an invasive oak-galling pest, it would be critical to know which species within the complex targeted that specific pest species—and the same dynamic applies in the use of any parasitoid wasp species for biological control. Meanwhile, failing to differentiate specialists from generalists hinders scientists’ ability to understand actual generalist insects and what enables them to target a variety of hosts, the researchers note.

Sheikh says she sees parasitoid wasps as “emblems of weird—i.e., interesting—biology” and is intrigued by their specialization strategies. “More so than any specific number of potential new species, I am excited about how this study and many others are revealing a plethora of cryptic diversity,” she says. “This, to me, suggests that we still have a lot to learn about the processes that structure species interactions with each other and their environments.”

ABOUT: ESA is the largest organization in the world serving the professional and scientific needs of entomologists and people in related disciplines. Founded in 1889, ESA today has nearly 7,000 members affiliated with educational institutions, health agencies, private industry, and government. Headquartered in Annapolis, Maryland, the Society stands ready as a non-partisan scientific and educational resource for all insect-related topics. For more information, visit www.entsoc.org.