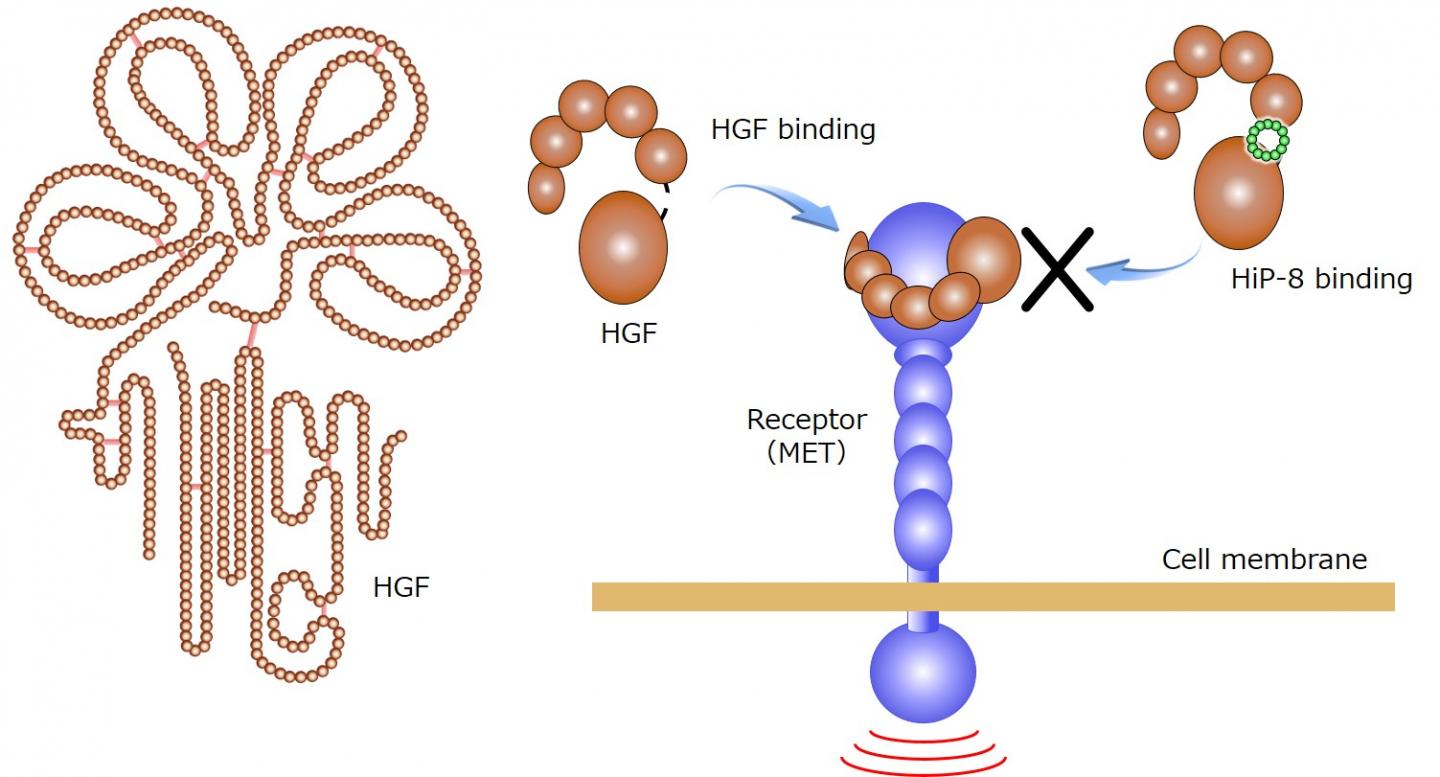 Hepatocyte Growth Factor (HGF)*1) is a protein that acts as a cell growth factor. By binding to its receptor protein MET on the cell membrane, it exerts its physiological functions such as proliferation and migration of cells, as well as tissue repair and regeneration. For a cancer tissue, since it promotes invasion and survival of cancer cells, it can play roles in cancer metastasis and acquisition of resistance against anti-cancer drugs. HGF exists in a precursor form, inactive HGF, in various tissues, but the precursor is converted into active HGF only in the vicinity of cancer cells. Because of this reason, molecules that selectively detect/inhibit active HGF are highly desirable but have not been described so far.

Molecular-targeted drugs that selectively inhibit specific molecules have been developed and used for cancer treatment and for other diseases. Among others, antibodies show high specificity to their target molecules, but one of their drawbacks is their very high cost. On the other hand, synthetic drugs are much less expensive since they can be chemically synthesized but their specificity against their target molecules is not high. Recently, much attention has been paid to macrocyclic peptides*2), which may show target specificity as high as antibodies and yet may be available by chemical synthesis.

The present collaborative research team from five institutions including Kanazawa University successfully discovered a macrocyclic peptide, HiP-8, which binds to the active form of HGF to inhibit its activity, using the PaPID method*3). HiP-8 is a macrocyclic peptide consisting of 12 amino acid residues in a ring-like geometry (Figure 1), binding to active HGF with a very high affinity and inhibiting HGF binding to its receptor MET (Figure 1).

In addition, in order to elucidate the functional interaction between HiP-8 and HGF, this study employed high-speed atomic force microscopy (HS-AFM)*4) developed at Kanazawa University, which allows visualization of the dynamics and morphology of biological molecules (Figure 2). This investigation successfully showed that, while an active HGF molecule exhibited dynamic behavior, upon binding of HiP-8, the molecular dynamics of HGF was strongly inhibited. This novel discovery shows that the highly dynamic nature of a protein molecule was inhibited by a small molecule.

The results of the present study are expected to lead to the development of new PET diagnostic methods with radiotracer HiP-8, a macrocyclic peptide. HiP-8 is a candidate molecule of a new molecular-targeted drug that selectively inhibits only active HGF.

HGF, a physiologically active protein, discovered in Japan, plays important roles in regeneration in the liver and the kidney and in the protection of neurons. HGF not only stimulates proliferative activity of cells but enhances cell migration and survival. Excessive production of HGF in cancer tissue leads to cancer metastasis and resistance against anti-cancer agencies.

Abbreviation of Random Peptide Integrated Discovery. RaPID system was established by Prof. Suga (University of Tokyo). This is a method to screen and obtain macrocyclic peptides rapidly and efficiently and select those which bind to target biological molecules (primarily proteins) with a high specificity and affinity. By using an artificial tRNA synthetic system (Flexizyme) and translation (from RNA to protein) system, an enormous number of different macrocyclic peptides are synthesized out of natural amino acids (20 types) as well as non-natural amino acids. From the various macrocyclic peptides, those which bind to a target molecule can be obtained with high efficiency.

HS-AFM was developed at Kanazawa University not only for academic but also for practical use. A very sharp probe attached to a flexible cantilever scans the surface of a specimen by flexibly changing the relative position between the probe and the specimen in horizontal directions. This enables visualization of the surface geometry and movement of the specimen.

PET is an acronym of Positron Emission Tomography. A chemical compound or a protein is labeled with a positron-emitting radioligand and the resultant labeled compound or protein, called a PET probe, is introduced into the body. The distribution or accumulation of PET probe in the body is visualized in 3-dimensions in a non-invasive manner and quantified. PET is highly effective in obtaining an image and time course of physiological functions in humans. By converting a drug into a PET probe, it becomes possible to investigate distribution of the drug among various organs. Imaging diagnosis is widely used using a PET probe that is known to accumulate in a specific diseased tissue.

Cycling lanes, not cyclists, reduce fatalities for all road users

UTSA researchers: Those with inadequate access to food likely to…