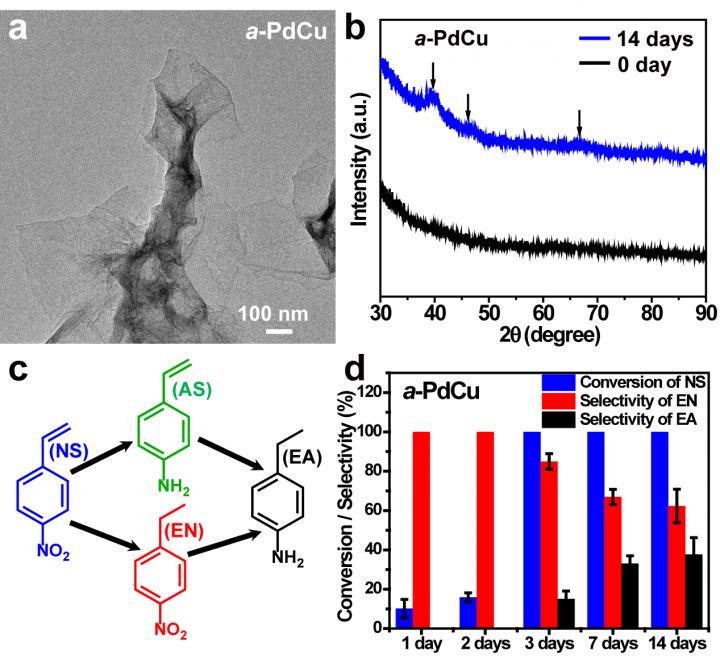 In recent years, phase engineering is emerging as a promising and challenging research field in noble metal-based nanomaterials. In particular, as one kind of heterophase nanostructures, amorphous/crystalline heterophase nanostructures have been prepared and demonstrated promising catalytic performance. The random atomic arrangement in amorphous phase results in highly unsaturated coordination and abundant active sites for catalytic applications. In addition, the amorphous/crystalline interfaces can also benefit the catalytic activity.

However, so far, it is still very challenging for wet-chemical synthesis of ultrathin 2D noble metal-based nanoalloys with amorphous/crystalline heterophase. The thermodynamically stable phases for noble metals are close-packed crystalline structures due to the strong atomic interaction, thus it is thermodynamically unfavored to form amorphous phase, which has random atomic arrangement. In addition, the atomic isotropy of amorphous phase also makes it very challenging to obtain the 2D structure.

Herein, Prof Zhang Hua’s group has prepared two types of amorphous/crystalline heterophase PdCu nanosheets, of which one is amorphous phase-dominant (a-PdCu) and the other one is crystalline phase-dominant (c-PdCu). Since amorphous phase in metals tends to transform into crystalline phase under ambient conditions, the phase transformation behavior of the synthesized hereophase PdCu nanosheets and the heterophase-dependent properties have been systematically studied. During the aging process, the crystallinity of a-PdCu gradually increased, which was accompanied with changes in some other physicochemical properties, including electronic binding energy and surface ligand adsorption. Consequently, the chemoselectivity and catalytic activity of the heterophase PdCu nanosheets also changed in the hydrogenation of 4-nitrostyrene. It is found that in the first 2 days of the aging process, the a-PdCu showed very high chemoselectivity, while the c-PdCu did not show chemoselectivity. After 3-day aging, the a-PdCu lost the chemoselectivity, but its catalytic activity gradually increased, while the catalytic activity of c-PdCu gradually decreased and eventually became lower than that of the a-PdCu after aging for 14 days. This work demonstrates the intriguing properties of heterophase nanostructures, providing a new platform for future studies on the regulation of functionalities and applications of nanomaterials by phase engineering.