HER2 positive breast cancer: Treatment de-escalation needs to be personalized 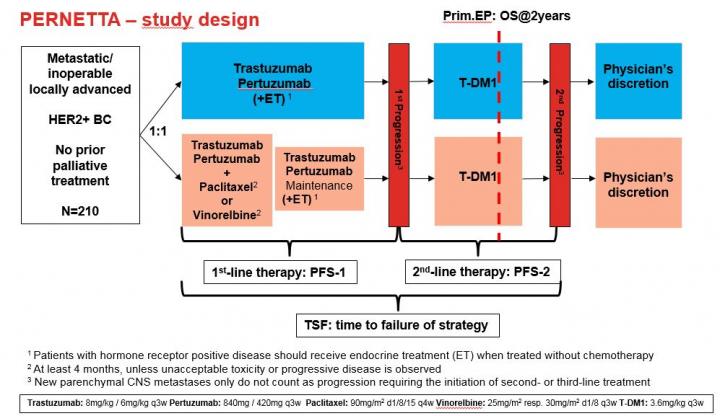 Lugano, Switzerland, 1 May 2019 – De-escalation approaches in the treatment of women with HER2 positive breast cancer need to be personalised, according to Dr Carmen Criscitiello, European Institute of Oncology, Milan, Italy. Her comments come on the occasion of the presentation of updated research results at the inaugural ESMO Breast Cancer Congress 2019, 2-4 May, in Berlin, Germany. (1)

“The introduction of anti-HER2 therapies has brought a huge survival benefit in early and advanced HER2 positive breast cancer, thus there is now a need for reducing the intensity and side effects of the treatment administered,” said Criscitiello. “However, the priority is to identify which patients might be spared some toxic therapies without worsening the survival benefit.”

A de-escalation strategy omitting chemotherapy in the first line treatment of HER2 positive metastatic breast cancer was attempted in the PERNETTA trial. (2) As previously reported, the strategy does not worsen two-year overall survival but significantly shortens progression-free survival.

The phase II trial randomly allocated 210 patients to trastuzumab plus pertuzumab alone versus trastuzumab plus pertuzumab combined with chemotherapy until progression. After progression, both groups received T-DM1 as second line therapy. The primary endpoint of overall survival at two years was reached by 77% of patients receiving antibodies alone and 76% of those who also had chemotherapy. Progression-free survival after first line therapy was 8.4 months with antibodies alone and 23.3 months with antibodies plus chemotherapy group.

New findings revealed today at the ESMO Breast Cancer Congress 2019 show that the results were similar regardless of hormone receptor status, and overall quality of life was also similar between groups during first line treatment. (3) But according to analyses of adverse events and patient reported symptoms, those receiving antibodies alone had less hair loss, mouth sores, nausea, and fatigue.

First author Prof. Jens Huober, of the University Hospital Ulm, Germany, said: “Trials of HER2 positive breast cancer in the neoadjuvant setting have shown that the HER2 enriched subtype is the most sensitive to anti-HER2 therapy. Our hypothesis is that this also applies to the metastatic setting. If the progression-free survival difference is smaller in this subtype, then omitting chemotherapy in the first line may be a good option for these patients.”

Huober noted that the trial was conducted to discover if it is safe to omit chemotherapy from first line treatment of patients with HER2 positive metastatic breast cancer who receive dual anti-HER2 therapy followed by T-DM1. “We looked at two-year overall survival because physicians are afraid they will lose patients early if they don’t give the maximum treatment. Progression-free survival was shorter but did not seem to affect overall survival in the long run. Omitting chemotherapy in the first line could be discussed as an option with patients who have a low to intermediate tumour burden. However, a phase III trial is needed for definitive proof that patients are not at risk of early death if they start with antibodies alone.”

ESMO spokesperson Criscitiello emphasised that it is important for studies in this field to select a specific population in which to attempt treatment intensity optimisation and agreed that using the PAM50 test to select patients with the HER2 enrichment subtype may be an effective approach. “There was no biological selection of patients in the PERNETTA trial,” noted Criscitiello, who also highlighted the choice of primary endpoint. “Here we have a progression-free survival that is almost two times less than that achieved with chemotherapy. The short overall survival endpoint did not capture if denying a treatment which is demonstrated to be meaningfully most effective impacts on long-term survival. In addition, the sample size is very small to detect a difference in overall survival. Avoiding chemotherapy in HER2 positive disease is appealing for patients and investigators, but it has to be done safely.”

Academic trials are now crucial in breast cancer, added Criscitiello. “The prognosis of patients with breast cancer has dramatically improved thanks to several new available treatments; we might see a reduced interest from industry to further invest in this disease, especially in trials designed with de-escalation attempts. Independent academic supported trials are very important to investigate research questions which are relevant for patients and doctors, like de-escalation to less toxic and demanding treatments and the identification of patients who may benefit the most from such an approach.”

Please make sure to use the official name of the meeting in your reports: ESMO Breast Cancer Congress 2019

This press release contains information provided by the author of the highlighted abstract and reflects the content of this abstract. It does not necessarily reflect the views or opinions of ESMO who cannot be held responsible for the accuracy of the data. Commentators quoted in the press release are required to comply with the ESMO Declaration of Interests policy and the ESMO Code of Conduct.

3 Abstract 150O_PR ‘Pertuzumab (P) + trastuzumab (T) with or without chemotherapy both followed by T-DM1 in case of progression in patients with HER2-positive metastatic breast cancer (MBC)- The PERNETTA trial (SAKK 22/10), a randomized open label phase II study (SAKK, UNICANCER, BOOG)’ will be presented by Jens Huober during the Proffered Paper session 1 on Thursday, 2 May, 14:30 to 16:00 (CEST) in the Vienna Hall. Annals of Oncology, Volume 30, 2019 Supplement 3, doi:10.1093/annonc/mdz095

About the European Society for Medical Oncology (ESMO)

ESMO is the leading professional organisation for medical oncology. With more than 20,000 members representing oncology professionals from over 150 countries worldwide, ESMO is the society of reference for oncology education and information. ESMO is committed to offer the best care to people with cancer, through fostering integrated cancer care, supporting oncologists in their professional development, and advocating for sustainable cancer care worldwide. Visit http://www.esmo.org

Background: We assumed that a strategy with dual blockade of T+P without chemotherapy followed by T-DM1 at progression might be similarly effective in terms of overall survival (OS), but less toxic resulting in better Quality of Life (QoL) in pts with HER2+ MBC. Updated efficacy results by hormone receptor (HR) status and QoL data are given.

Methods: Pts with centrally confirmed HER2+ MBC were randomized 1:1 to receive either P+T alone (arm A) or P+T combined with weekly paclitaxel or vinorelbine (arm B), followed by maintenance treatment with T+P until progression. After progression, T-DM1 was given as 2nd line therapy in both arms. The primary endpoint was OS at 24 months (mo), among secondary endpoints progression free survival (PFS) was included. QoL was assessed every 3 mo up to 24 mo during 1st line by the NFBSI-16 (summary score and subscale scores for disease-related symptoms, treatment side-effects, function/well-being). Two single items assessed treatment burden and coping.

Results: Between 05/13 and 01/16, 210 pts were enrolled. Median age was 58 years, 63% of pts had lung or liver metastases, 36% of tumors were HR-, paclitaxel/vinorelbine was given in 46/59 pts. Efficacy results are shown in table 1. No difference in OS was observed. HR status did not affect PFS for 1st line. During 1st line, changes from baseline showed small improvements in QoL (NFBSI-16 summary scores) in arm A, while QoL scores remained stable in arm B. Patients in arm B reported more treatment burden during the first 6 months, but not thereafter, while coping improved clinically relevant in both arms.

Conclusions: Despite shorter 1st line PFS, OS at 2 years was not affected for P+T alone followed by T-DM1. Side-effects were less frequently seen in the chemotherapy-free arm, although QoL was similar during 1st line in both arms.

All other authors have declared no conflicts of interest.

Early humans evolved in ecosystems unlike any found today