Heme is not just for Impossible Burgers 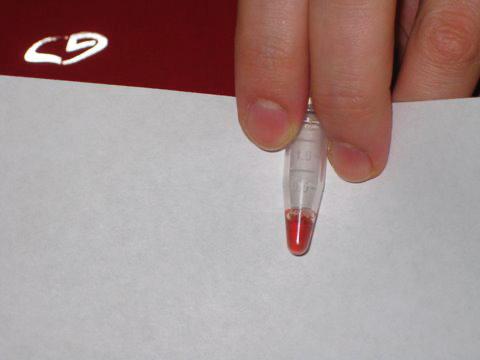 It took an unlikely food innovation — earth-friendly vegetarian patties, made to taste and “bleed” like the familiar meaty ones — to make people aware of heme.

But heme is an essential part of proteins found in most life forms, from tiny bacteria to soy plants to the human body. Heme plays a crucial role in supplying cells with the energy needed to carry out chemical reactions.

In human cells, iron-containing heme is the essential cofactor of two types of molecules. One is the hemoglobin molecules that bind oxygen in the lungs and ferry it around the body. More than half the heme in the body is in hemoglobin, but some of the rest is in the hemeproteins called cytochromes.

New research from Washington University in St. Louis in the journal eLife shows how animals and bacteria differ in the enzyme they use to attach heme to the cytochrome. Spotting variations in how this “cytochrome c synthase” works would help to find compounds that deactivate the enzyme in bacteria, but not in humans. The results of this study demonstrate that the bacterial cytochrome c synthase could be a promising target for new antibiotics.

However, studying cytochrome c synthase in living cells is challenging.

“We took purified CcsBA [a protein for making cytochrome in bacteria] and purified human HCCS and, with an assay in a test tube, attached the heme to the cyt c or cyt c peptides,” said Robert Kranz, professor of biology in Arts & Sciences and senior author of the new paper. “This allows us to say what each (CcsBA and human HCCS) recognizes on the cytochrome to attach the heme. It further shows that the peptides can inhibit attachment to the cytochrome by HCCS.

“No one else has purified CcsBA or human HCCS, or analyzed the reaction in vitro,” Kranz said.

In addition to this first-of-its-kind research, Kranz led the group of Washington University scientists that previously discovered how the vital but vulnerable heme molecule is shuttled across cell membranes for cytochrome synthesis.

For the new work, the scientists examined in detail which structures the enzymes recognize to attach the heme onto their cytochrome target. Their experiments revealed that human and bacterial synthases actually rely on different parts of the cytochrome c to orient themselves. Different short compounds could block either the human or bacterial enzyme.

Variations between human and bacterial cytochrome c synthase could lead to new antibiotics that prevent cytochrome assembly and kill bacteria while sparing patients. A provisional patent application has been filed for the process by the Washington University Office of Technology Management.

“The project represents seven years of effort,” said Molly C. Sutherland, one of three co-first authors of the paper, who is now an assistant professor of biological sciences at the University of Delaware. Sutherland said that she and co-authors Shalon E. Babbitt and Deanna L. Mendez were able to “work collaboratively, bring individual expertise and build off each other’s results.

“This combined effort — along with some talented undergrads! — is the reason that we were able to analyze the human and bacterial holocytochrome c synthases at such a detailed level,” Sutherland said.

Heme helps ferry oxygen throughout the body, carries iron and colors blood red. For most humans, the majority of the heme we consume comes from animals.

But plants also make heme. Plants use CcsBA in their chloroplasts — the organelle that conducts photosynthesis — and they cannot grow without cytochrome proteins. Because of this dependency, Kranz and his team are also looking at how they could block cytochrome processes in plants to build smarter herbicides.

Which bring us back to the heme in those veggie burgers. The company Impossible Foods discovered that heme in red meats catalyze (during cooking) many of the reactions that form the tasty flavors that meat-loving humans crave. A question raised by some at that time was whether heme — as an added “magic” ingredient — was safe. But because all plants have heme, humans ingest it every day — even vegetarians. It is just at higher concentrations in red meat.

“Heme has been consumed by humans and other animals for a long time with no issues,” Kranz told Business Insider at the height of the Impossible Burger craze.

So whether functioning as the magic ingredient in plant-based burgers or as an essential co-factor for cytochromes and hemoglobins, being able to control processes that use heme will lead to advances in health and agriculture. The potential use in new antibiotics is perhaps the most exciting for Kranz and his team.

“Now, we see how we might be able to target heme to starve bacteria by cutting off their energy sources,” Kranz said. “The next step is to identify the molecules that specifically interfere with cytochrome synthase in bacteria.”