Through investigation of the so-called ‘Hippo pathway,’ researchers at Osaka University have identified a key regulatory mechanism in the development of normal pluripotent embryonic cells 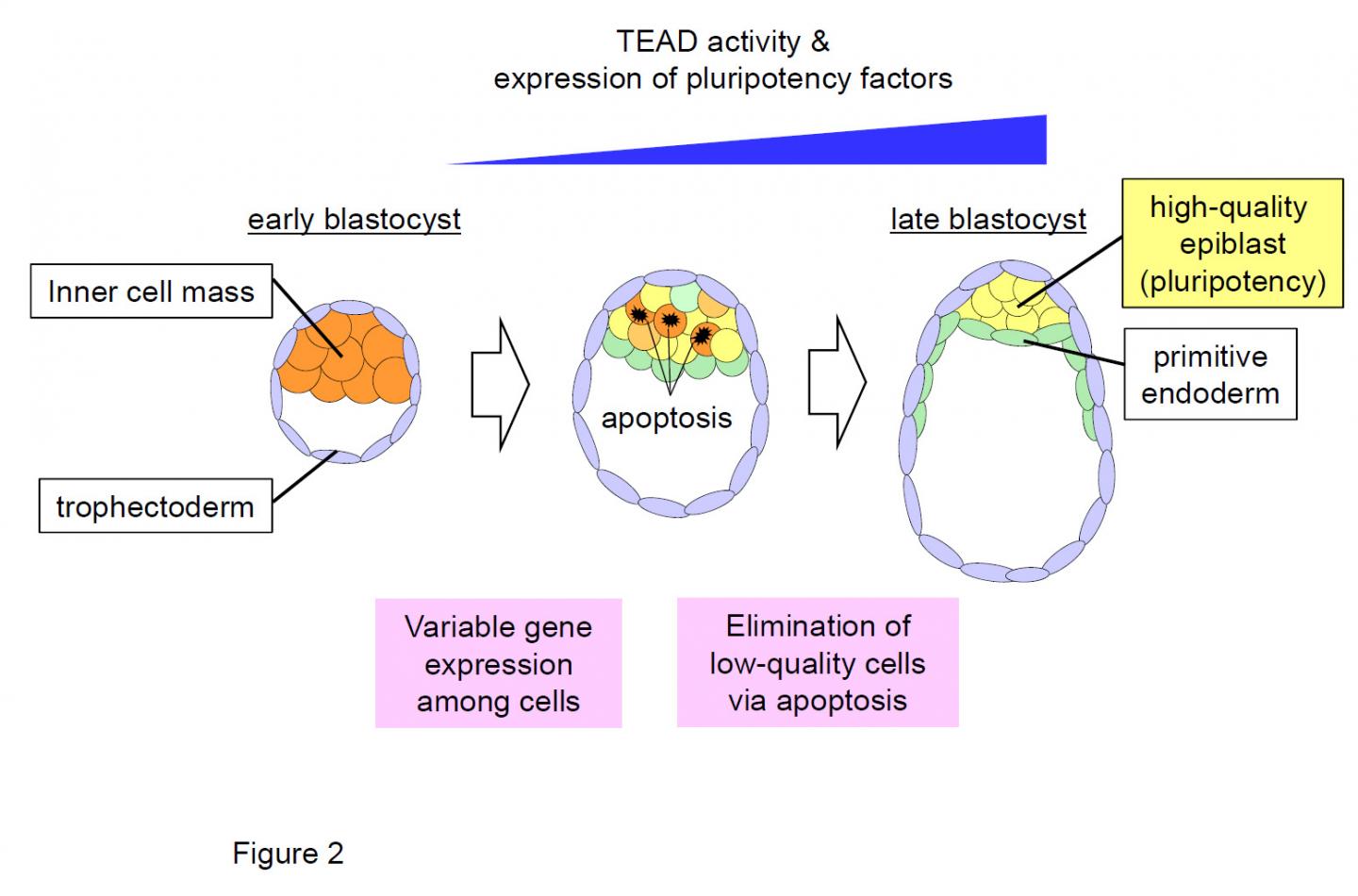 Osaka, Japan – The early development of embryos is not well understood. One necessary stage is the formation of the blastocyst, a collection of cells present by about 4 days after fertilization of the egg, before implantation in the uterus. From that tiny collection of cells, all the different cells in the body must be created. Accordingly, there need to be mechanisms in the blastocyst to ensure normal gene expression and cell differentiation; those regulatory mechanisms are still largely unknown.

It is known that the proteins in the tumor-suppression “Hippo pathway” act in cells throughout the body to regulate normal organ growth and tissue regeneration. These proteins ensure that organs reach the sufficient size, while countering excessive enlargement. Therefore, researchers have theorized that Hippo-pathway proteins contribute to regulation of normal blastocyst development. That theory was confirmed recently when Masakazu Hashimoto and Hiroshi Sasaki, of the Graduate School of Frontier Biosciences at Osaka University, demonstrated that the Hippo-pathway proteins TEAD and YAP serve an important regulatory function in blastocysts. Together, these proteins support pluripotency (i.e., the ability to become any type of cell) in the blastocyst before implantation.

In their study, published in the journal Developmental Cell, Drs. Hashimoto and Sasaki used genetically modified mouse cells to alter the amounts and timing of TEAD activation during blastocyst formation. Results showed that accumulation of YAP in cell nuclei activated TEAD and, subsequently, activated transcription factor MYC. This activation sequence then induces a previously unknown process of cell competition within the blastocyst.

“We were able to measure levels of activated TEAD-YAP in the epiblast (a layer of the blastocyst) of day 4 after fertilization, and show that levels differed between cells. Higher levels of TEAD are associated with greater pluripotency, so cells with low TEAD, and thus low pluripotency, must be eliminated from the epiblast,” says corresponding author Dr. Sasaki.

That elimination is achieved when cell competition, through encountering neighboring cells with higher levels of TEAD, induces apoptosis (cell self-destruction) in cells of low pluripotency.

First author Dr. Hashimoto adds that “Appropriate control of the Hippo pathway in epiblasts acts as a quality-control mechanism, ensuring that all cells have the maximum potential to develop into the many different cell types that are required for the growing embryo.”

The information gained in this study could aid in improved induction of pluripotent stem cells, of potential use in various clinical trials, and in the maintenance of embryos for in-vitro fertilization.

The article, “Epiblast formation by TEAD-YAP-dependent expression of pluripotency factors and competitive elimination of unspecified cells,” was published in the journal Developmental Cell at https://doi.org/10.1016/j.devcel.2019.05.024

Intelligent testing could save lives by defusing ticking time bomb of…