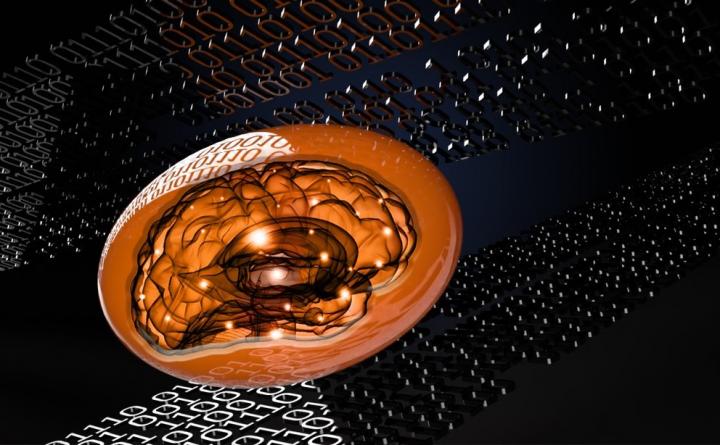 Engineered, autonomous machines combined with artificial intelligence have long been a staple of science fiction, and often in the role of villain like the Cylons in the “Battlestar Galactica” reboot, creatures composed of biological and engineered materials. But what if these autonomous soft machines were … helpful?

This is the vision of a team of Penn State and U.S. Air Force researchers, outlined in a recent paper in Nature Communications. These researchers produced a soft, mechanical metamaterial that can “think” about how forces are applied to it and respond via programmed reactions. This platform holds great potential for a variety of applications from medical treatments to improving the environment.

“We created soft, mechanical metamaterials with flexible, conductive polymer networks that can compute all digital logic computations,” said Ryan Harne, James F. Will Career Development Associate Professor, Penn State. “Our paper reports a way to create decision-making functionality in engineered materials in a way that could support future soft, autonomous engineered systems that are invested with the basic elements of lifeforms yet are programmed to perform helpful services for people. These could include helping maintain sustainable and robust infrastructure, monitoring of airborne and waterborne contaminants and pathogens, assisting with patient wound healing, and more.”

Human thought processes are based on logic, Harne notes, which is similar to Boolean logic from mathematics. This approach uses binary inputs to process binary control outputs — using only “on” and “off” sequences to represent all thought and cognition. The soft materials that the research team created “think” using the reconfiguration of the conductive polymer networks. Mechanical force, applied to the materials, connects, and reconnects the network.

Using a low voltage input into the materials, the research team created a way for the soft material to decide how to react according to the output voltage signal from the reconfigured conductive polymer network.

The type of logic that Harne and the team uses goes beyond pure mechanical logic, which is a way of using combinations of bistable switches — switches with two stable states — to represent the “0s” and “1s” of a binary number sequence. They found that when they used pure mechanical logic, the researchers ended up getting stuck because certain logical operations cannot be constructed.

The key to realizing all the logic gates was in the combination of the electrical polymer network with the soft, deformable material. The researchers created the logic operations by simultaneously reconfiguring the soft material and the electrically conductive network.

This also ensures that the binary output is in the form of electricity, which is needed to drive an actuation mechanism that makes the material respond to the applied mechanical force. The combination of electrical and mechanical signals allows the machine to move to get out of the way or to push back in a certain direction.

Harne and the team want to go beyond a single material and design something more complex.

“I have a vision for how scientists and engineers can create engineered living systems that help society,” Harne said. “All you need to do is bring together all of the functions of life forms. And when you do that, you have at your disposal the building blocks of engineered life.”

While this all seems like science fiction, Harne believes it has tremendous potential.

“It is somewhat sci-fi, I do have to admit that, and I will say, I’ve had colleagues think I’m a little crazy,” Harne said. “But if we as engineers and scientists understand all of the things that make up life, why aren’t we trying to make engineered living things that can help people?”

Along with Harne, other authors of the study include from Penn State Charles El Helou, doctoral student in mechanical engineering and from the U.S. Air Force Research Laboratory, Philip Buskohl and Christopher Tabor.