Heaviest element yet detected in an exoplanet atmosphere

Using the European Southern Observatory’s Very Large Telescope (ESO’s VLT), astronomers have discovered the heaviest element ever found in an exoplanet atmosphere — barium. They were surprised to discover barium at high altitudes in the atmospheres of the ultra-hot gas giants WASP-76 b and WASP-121 b — two exoplanets, planets which orbit stars outside our Solar System. This unexpected discovery raises questions about what these exotic atmospheres may be like. 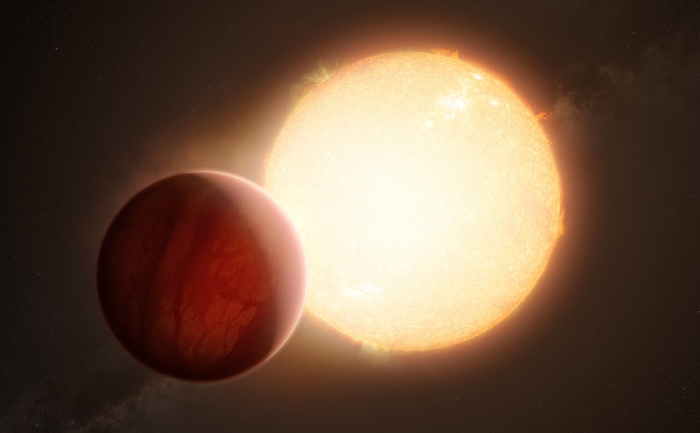 Using the European Southern Observatory’s Very Large Telescope (ESO’s VLT), astronomers have discovered the heaviest element ever found in an exoplanet atmosphere — barium. They were surprised to discover barium at high altitudes in the atmospheres of the ultra-hot gas giants WASP-76 b and WASP-121 b — two exoplanets, planets which orbit stars outside our Solar System. This unexpected discovery raises questions about what these exotic atmospheres may be like.

“The puzzling and counterintuitive part is: why is there such a heavy element in the upper layers of the atmosphere of these planets?” says Tomás Azevedo Silva, a PhD student at the University of Porto and the Instituto de Astrofísica e Ciências do Espaço (IA) in Portugal who led the study published today in Astronomy & Astrophysics.

WASP-76 b and WASP-121 b are no ordinary exoplanets. Both are known as ultra-hot Jupiters as they are comparable in size to Jupiter whilst having extremely high surface temperatures soaring above 1000°C. This is due to their close proximity to their host stars, which also means an orbit around each star takes only one to two days. This gives these planets rather exotic features; in WASP-76 b, for example, astronomers suspect it rains iron.

But even so, the scientists were surprised to find barium, which is 2.5 times heavier than iron, in the upper atmospheres of WASP-76 b and WASP-121 b. “Given the high gravity of the planets, we would expect heavy elements like barium to quickly fall into the lower layers of the atmosphere,” explains co-author Olivier Demangeon, a researcher also from the University of Porto and IA.

“This was in a way an ‘accidental’ discovery,” says Azevedo Silva. “We were not expecting or looking for barium in particular and had to cross-check that this was actually coming from the planet since it had never been seen in any exoplanet before.”

The fact that barium was detected in the atmospheres of both of these ultra-hot Jupiters suggests that this category of planets might be even stranger than previously thought. Although we do occasionally see barium in our own skies, as the brilliant green colour in fireworks, the question for scientists is what natural process could cause this heavy element to be at such high altitudes in these exoplanets. ​​“At the moment, we are not sure what the mechanisms are,” explains Demangeon.

In the study of exoplanet atmospheres ultra-hot Jupiters are extremely useful. As Demangeon explains: “Being gaseous and hot, their atmospheres are very extended and are thus easier to observe and study than those of smaller or cooler planets”.

Determining the composition of an exoplanet’s atmosphere requires very specialised equipment. The team used the ESPRESSO instrument on ESO’s VLT in Chile to analyse starlight that had been filtered through the atmospheres of WASP-76 b and WASP-121 b. This made it possible to clearly detect several elements in them, including barium.

These new results show that we have only scratched the surface of the mysteries of exoplanets. With future instruments such as the high-resolution ArmazoNes high Dispersion Echelle Spectrograph (ANDES), which will operate on ESO’s upcoming Extremely Large Telescope (ELT), astronomers will be able to study the atmospheres of exoplanets large and small, including those of rocky planets similar to Earth, in much greater depth and to gather more clues as to the nature of these strange worlds.