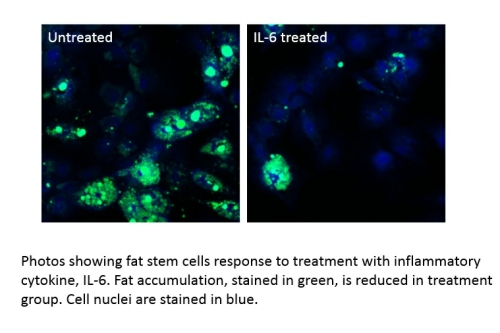 Obesity is responsible for the deaths of over three million people a year worldwide due to its associated diseases such as diabetes, cancer and cardiovascular disease.

However, a subset of obese individuals seems to be protected from such diseases. Understanding the underlying protective mechanisms in the lower risk individuals could help design novel therapeutic strategies targeting those at higher risk of disease.

An international collaboration, funded by Qatar National Research Fund (QNRF), between the University of Bristol and Anti-Doping Laboratory Qatar (ADLQ) has revealed that fat stem cells in healthy obese individuals can store fat more efficiently than those with increased risk of diabetes. Efficient fat storage protects against fat deposition on internal organs such as liver, kidneys and heart leading to increased risk of diabetes.

Dr Wael Kafienah, from the University of Bristol’s School of Cellular and Molecular Medicine, explained: “The existence of obese individuals with lower risk of diabetes has received great interest in the past few years, as they may hold the clue to understanding and possibly treating obesity-associated diabetes. Our clinical data confirmed the previously-reported variability in obesity-associated pathology. Here, we have shown that the group with healthy fat stem cells had lower cholesterol and a better liver function.”

Dr Mohamed Elrayess, from ADLQ, said: “In this study we have shown that the impaired ability of fat stem cells to store excess fat was partially due to increased levels of the inflammatory marker interleukin-6 in the blood. Indeed, when fat stem cells isolated from healthy obese individuals were exposed to interleukin-6 in the laboratory, they behaved like those obtained from individuals with risk of diabetes.” [FIGURE].

This study has shed light for the first time on the importance of fat stem cells in the context of diabetes. The collaboration between the two institutions will explore ways to improve the efficiency of fat stem cells in pre-diabetic obese patients, thereby reducing their risk of developing diabetes.