Haziness of exoplanet atmospheres depends on properties of aerosol particles 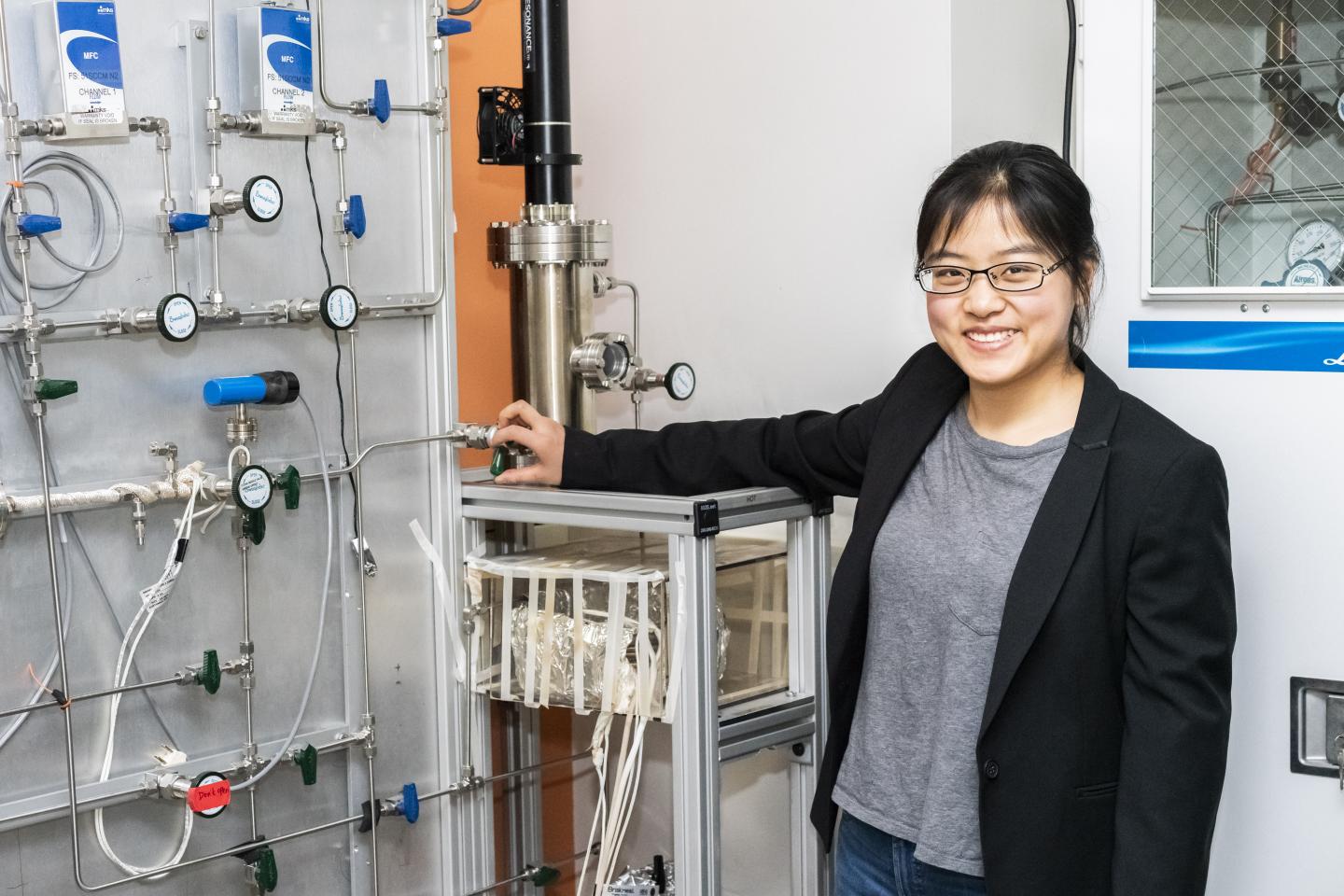 Many exoplanets have opaque atmospheres, obscured by clouds or hazes that make it hard for astronomers to characterize their chemical compositions. A new study shows that haze particles produced under different conditions have a wide range of properties that can determine how clear or hazy a planet’s atmosphere is likely to be.

“It’s not just haze production but also haze removal that determines how clear the atmosphere is,” said Xinting Yu, a postdoctoral fellow at UC Santa Cruz and lead author of the study, published July 12 in Nature Astronomy.

Yu and her colleagues measured the properties of haze particles produced in the laboratory under conditions representative of exoplanet atmospheres, including a range of gas compositions, temperatures, and energy sources. Coauthor Xi Zhang, assistant professor of Earth and planetary sciences at UC Santa Cruz, said laboratory experiments like this are essential for understanding haze formation and its impact on observations.

“We can’t bring haze samples back from exoplanets, so we have to try to mimic the atmospheric conditions in the laboratory,” he said.

According to Yu, haze removal depends on a critical material property of the particles called surface energy. “Surface energy describes how cohesive or ‘sticky’ the material is,” she said.

Sticky haze particles readily bond with each other when they collide, growing into larger particles that fall out of the atmosphere onto the surface of the planet (a process called dry deposition). They also make good condensation nuclei for cloud droplets and are easily removed by wet deposition. Hazes produced on Earth typically have high surface energy and are therefore ‘sticky’ and efficiently removed from the atmosphere.

Yu’s laboratory experiments show that the hazes produced in exoplanet atmospheres are highly diverse, with properties that depend on the conditions in which they are produced.

“Some of them are similar to the Earth haze, have high surface energy, and are easy to remove, leading to clear skies,” she said. “But some of them have very low surface energy, like a non-stick pan; they do not bond with other particles very well and remain as small particles hanging in the atmosphere for a long time.”

The study found that a critical factor is the temperature at which the haze particles are created. Hazes produced at around 400 Kelvin (260°F) tended to have the lowest surface energies, leading to less efficient removal and hazier atmospheres. This finding actually corresponds with observed trends, Yu said, noting that exoplanets at temperatures of 400 to 500 K tend to be the haziest.

Cooler planets located in the habitable zones of their host stars are more likely to have clear atmospheres, she said. “We may not have to worry about habitable exoplanets being too hazy for future observations, as hazes tend to have higher surface energies at lower temperatures,” Yu said. “So it is easy to remove these hazes, leaving relatively clear atmospheres.”

Astronomers are looking forward to having a powerful tool for characterizing exoplanet atmospheres with the upcoming James Webb Space Telescope (JWST). When an exoplanet transits across the face of its star, its atmosphere filters the light from the star, giving astronomers with a sensitive enough telescope (like JWST) an opportunity to identify the chemical components of the atmosphere using transmission spectroscopy.

A hazy atmosphere would interfere with transmission spectroscopy, but the hazes themselves may still yield valuable information, according to Zhang.

“Hazes are not featureless,” he said. “With better telescopes, we may be able to characterize the composition of exoplanet hazes and understand their chemistry. But the observations will be very hard to explain without data from laboratory experiments. This study has revealed the huge diversity of haze particles, and understanding their optical properties will be a high priority for future studies.”

In addition to Yu and Zhang, the coauthors of the paper include UCSC undergraduate Austin Dymont, astronomy professor Jonathan Fortney, and graduate student Diana Powell at UC Santa Cruz, as well as scientists at Johns Hopkins University, Cornell University, University of Texas at Austin, and University of Grenoble Alpes, France. This work was supported by NASA and the Heising-Simons Foundation.