The Hawaiian-Emperor seamount chain spans almost four thousand miles from the Hawaiian Islands to the Detroit Seamount in the north Pacific, an L- shaped chain that goes west then abruptly north. The 60-degree bend in the line of mostly undersea mountains and volcanic islands has puzzled scientists since it was first identified in the 1940s from the data of numerous echo sounding ships. 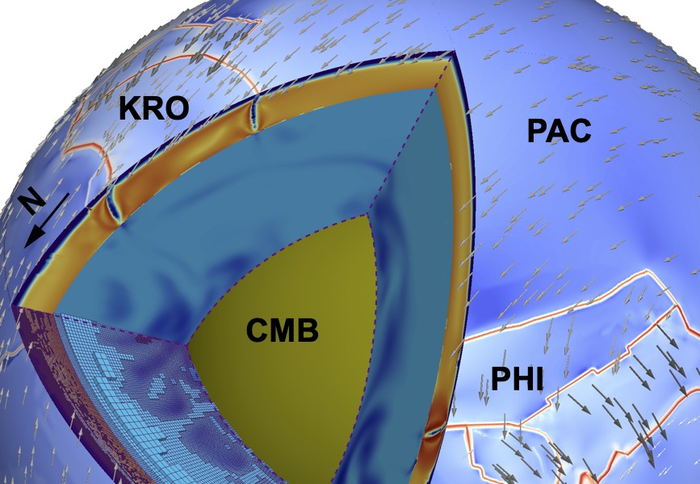 The Hawaiian-Emperor seamount chain spans almost four thousand miles from the Hawaiian Islands to the Detroit Seamount in the north Pacific, an L- shaped chain that goes west then abruptly north. The 60-degree bend in the line of mostly undersea mountains and volcanic islands has puzzled scientists since it was first identified in the 1940s from the data of numerous echo sounding ships.

A team of scientists have now used supercomputers allocated by the Extreme Science and Engineering Discovery Environment (XSEDE) to model and reconstruct the dynamics of Pacific tectonic plate motion that might explain the mysterious mountain chain bend.

“We’ve shown with computer models for the first time how the Pacific plate can abruptly change direction from the north to the west,” said Michael Gurnis, professor of Geophysics at the California Institute of Technology.

“It’s been a holy grail to figure out why this change happened,” he said. Gurnis co-authored the study on the origins of the seamount chain that was published in Nature Geoscience in January 2022.

Besides Gurnis, the team consisted of geoscientists Jiashun Hu, a post-doctoral scholar at Caltech, and Dietmar Müller of Sydney University in Australia and computational scientists Johann Rudi of Argonne National Laboratory and Georg Stadler of New York University.

The plate motion provides a key to understanding how the seamount chain reflects plate motions. Gigantic tectonic plates in Earth’s crust basically move over the hot, weak rock of the mantle.

The Pacific Plate is one of the largest. The plate spans about 40 million square miles undersea, outlined by the mountains and volcanos of the ‘Ring of Fire’ that are created by the return of the plates to the mantle.

But the volcanos of Hawaii and the Hawaiian-Emperor seamount chain weren’t caused by this process. Instead, scientists theorize that plumes of Earth’s hottest rock, from its core, travel upward through the mantle to generate a volcanic hotspot. And it’s theorized that the seamount chain was created by the plate moving over the hot plume, something like a trail of burn marks on a paper moved over a candle.

“Maybe there’s an underlying physical reason why they would happen simultaneously,” Gurnis said.

He pointed to previous work using techniques such as adaptive mesh refinement on the dynamics of mantle convection, computational work that scales well to a large number of CPUs and used the Stampede1 system of TACC and earned the team spearheaded by Johann Rudi the Gordon Bell Prize in 2015.

“Moreover, earlier work with Müller, Gurnis and others showed how the physics of plumes could work inside the mantle such that the you could have a plume which rapidly migrated to the south and then stopped at 50 million years ago,” Gurnis said.

“These two studies are complementary because going into the present study, we actually had a model which could explain the motion of the plume to the south and then stop abruptly, but we didn’t have a model that could explain how the plate could change its direction,” he added.

The team’s computations of the physics of tectonic plates had to account for the faults at their boundaries but yet allow the movement of plates.

The challenge of getting both of those pieces of physics computed simultaneously meant that they needed computational methods that can handle vast changes in the mechanical properties from one plate to another plate as well as their faults.

Yet, the traditional ideas of plate motion failed to add up to enough force in the models to pull the Pacific Plate to the west and explain the bend.

“We discovered that there was another idea that had existed in the literature, but it wasn’t getting much attention,” Gurnis said.

The new factor accounted for in the study was a subduction zone in the Russian Far East, a Kronotsky arc that terminated at about 50 million years ago. They built new plate tectonic reconstructions with these subduction zones.

“It’s a new hypothesis that’s much firmer in terms of the physics which it’s based upon,” Gurnis concluded. “It will allow other scientists to see if it will hold up to further scrutiny and if there are other ideas that can be tested on its assumptions.”

For the study, Gurnis was awarded access to the Stampede2 supercomputer at TACC through XSEDE funded by the National Science Foundation (NSF). He was also awarded access to the NSF-funded Frontera system also at TACC, the most powerful supercomputer in academia and the first phase of the NSF “Towards a Leadership Class Computing Facility” program.

“Both XSEDE and Frontera are absolutely vital for our research,” Gurnis said.

“This capability computing is essential,” he added. “We’re spinning up projects with this collaboration that will be substantially larger than this, that are going to require something even beyond Frontera to compute.”

This basic research aims to investigate mysteries about the dynamics of the past and present Earth.

“When you deal with some of the most fundamental processes in the earth, it’s important to correctly figure out how they work,” Gurnis said.

He also highlighted the interplay between domain science and the applied work with computational scientists.

“The algorithms we’ve developed for adaptive mesh refinement can be applied to many pure and applied problems,” Gurnis added. “That was a huge breakthrough.”

Said Gurnis: “We now have algorithms which could move us in new directions. I wasn’t thinking about the Hawaiian-Emperor seamount problem when we started this project. But then, new ideas and capabilities came forward. Suddenly new science questions could emerge. The use of supercomputers essentially allows us to discover and uncover the basic phenomenon which govern some of most important processes shaping the earth.”

Dynamics of the abrupt change in Pacific Plate motion around 50 million years ago.