Has the stilling of the surface wind speed ended in China? 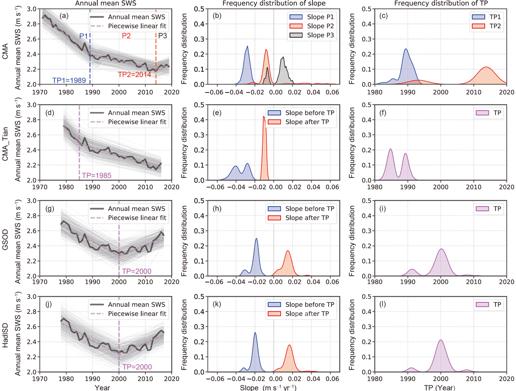 The most significant feature of global land surface wind speed (SWS) recently is the long-term weakening trend since the 1960s, that is, the phenomenon known as global terrestrial stilling. Many studies have found that stilling is widespread worldwide. It has seriously affected the ecological environment and social economy, especially restricted the sustainable development of the wind energy industry. It is found that the stilling reversed around 2010 and global SWS is strengthening; then, has the stilling of surface wind speed ended in China? A recent study systematically answered this question. The related paper titled “Has the stilling of the surface wind speed ended in China?” was recently published in Science China Earth Sciences in 2021. The paper was completed by Yang Qing et al., from Institute of Atmospheric Physics, Chinese Academy of Sciences.

Based on observational SWS data from 1971 to 2019, results showed that annual mean SWS in China underwent a reversal from a continuous weakening trend to a significant strengthening trend around 2014 (Figure 1), implying that stilling may have ended in 2014. Note that the reversal had obvious regional and seasonal variations. For example, in Northeast China, Western Xinjiang and on the Tibetan Plateau, the years when both annual and seasonal mean SWS changed from a weakening to a strengthening trend were around 2013/2014, 1993/1994 and 2000, respectively; however, stilling is ongoing in the eastern and southern coastal areas, North China and Eastern Xinjiang.

In addition, by comparing the SWS data observed by China’s stations with the wind speed data obtained from global surface database (GSOD and HadISD), it is found that GSOD and HadISD may have some uncertainties in characterizing the trend changes of SWS in China. The GSOD/HadISD-based results could be considered with some cautions.

Wind power is an integral part of China’s strategy to achieve the carbon emission reduction targets set in the Paris Agreement. The results can provide scientific support for the layout of China’s wind power industry.