Stem cells are a biological wonder. They can repair, restore, replace, and regenerate cells. In most animals and humans these cells are limited to regenerating only the cell type they are assigned to. So, hair stem cells will only make hair. Intestine stem cells will only make intestines. But, many distantly-related invertebrates have stem cell populations that are pluripotent in adult animals, which means they can regenerate virtually any missing cell type, a process called whole-body regeneration. 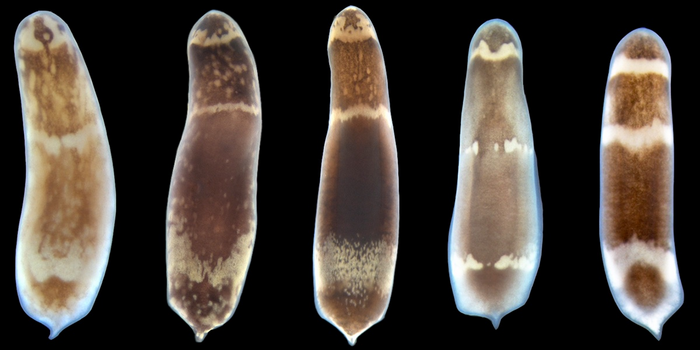 Stem cells are a biological wonder. They can repair, restore, replace, and regenerate cells. In most animals and humans these cells are limited to regenerating only the cell type they are assigned to. So, hair stem cells will only make hair. Intestine stem cells will only make intestines. But, many distantly-related invertebrates have stem cell populations that are pluripotent in adult animals, which means they can regenerate virtually any missing cell type, a process called whole-body regeneration.

Even though these adult pluripotent stem cells (aPSCs) are found in many different types of animals (such as sponges, hydras, planarian flatworms, acoel worms, and some sea squirts) the mechanism of how they are made is not known in any species.

In a new study in Cell researchers in the Department of Organismic and Evolutionary Biology at Harvard University have identified the cellular mechanism and molecular trajectory for the formation of aPSCs in the acoel worm, Hofstenia miamia.

H. miamia, also known as the three-banded panther worm, is a species that can fully regenerate using aPSCs called “neoblasts.” Chop H. miamia into pieces and each piece will grow a new body including everything from a mouth to the brain. Senior author Professor Mansi Srivastava collected H. miamia in the field many years ago because of its regenerative ability. Once back in the lab, H. miamia began to produce many embryos that could easily be studied.

A previous study by Srivastava and co-author postdoctoral researcher Lorenzo Ricci developed a protocol for transgenesis in H. miamia. Transgenesis is a process that introduces something into the genome of an organism that is not normally part of that genome. This method allowed lead author Julian O. Kimura (PhD ’22) to pursue his question of how these stem cells are made.

“One common characteristic among animals that can regenerate is the presence of pluripotent stem cells in the adult body,” said Kimura. “These cells are responsible for re-making missing body parts when the animal is injured. By understanding how animals like H. miamia make these stem cells, I felt we could better understand what gives certain animals regenerative abilities.”

There are some unifying features of these stem cell populations in adult animals such as the expression of a gene called Piwi. But in no species so far has anyone been able to figure out how these stem cells are made in the first place. “They’ve mostly been studied in the context of adult animals,” said Srivastava, “and in some species we know a little bit about how they might be working, but we don’t know how they are made.”

The researchers knew that worm hatchlings contain aPSCs, so reasoned they must be made during embryogenesis. Ricci used transgenesis to create a line that caused embryo cells to glow in fluorescent green due to the introduction of the protein Kaede into the cell. Kaede is photo-convertible, which means shining a laser beam with a very specific wavelength on the green will convert it to a red color. You can then zap the cells with a laser to turn individual green cells of the embryo into a red color.

“Using transgenic animals with photo-conversion is a very new twist we devised in the lab to figure out the fates of embryonic cells,” said Srivastava. Kimura applied this method to perform lineage tracing by letting the embryos grow and watching what happens.

Kimura followed the embryo’s development as it split from single cell to multiple cells. Early division of these cells is marked by stereotyped cleavage, which means embryo to embryo cells divide in the exact same pattern such that cells can be named and studied consistently. This raised the possibility that perhaps every single cell has a unique purpose. For instance, at the eight-cell stage it’s possible the top, left corner cell makes a certain tissue, while the bottom, right cell makes another tissue.

To determine the function of each cell, Kimura systematically performed photo-conversion for each of the cells of the early embryo, creating a full fate map at the eight-cell stage. He then tracked the cells as the worm grew into an adult that still carried the red labeling. The repetitious process of following each individual cell again and again across many embryos made it possible for Kimura to trace where each cell was working.

At the sixteen-cell stage embryo he found a very specific pair of cells that gave rise to cells that looked to be the neoblasts. “This really excited us,” said Kimura, “but there was still the possibility that neoblasts were arising from multiple sources in the early embryo, not just the two pairs found at the sixteen-cell stage. Finding cells that simply resembled neoblasts in appearance wasn’t definitive evidence that they truly were neoblasts, we needed to show that they behaved liked neoblasts as well.”

To be certain, Kimura put this particular set of cells, called 3a/3b in H. miamia, on trial. In order to be the neoblasts the cells must satisfy all of the known properties of stem cells. Are the progeny of those cells making new tissue during regeneration? The researchers found that yes, the progeny of only those cells made new tissue during regeneration.

Another defining property is the level of gene expression in stem cells, which must have hundreds of genes expressed. To determine if 3a/3b fit this property, Kimura took the progeny with 3a/3b glowing in red and all other cells glowing in green and used a sorting machine that separated the red and green cells. He then applied single-cell sequencing technology to ask, which genes are being expressed in the red cells and in the green cells. That data confirmed that at the molecular level only the progeny of the 3a/3b cells matched stem cells and not the progeny of any other cell.

Kimura generated a huge dataset of embryonic development at the single-cell level detailing which genes were being expressed in all of the cells in embryos from the beginning to the end of development. He allowed the converted 3a/3b cells to develop a little bit further, but not all the way to hatchling stage. He then captured these cells using the sorting technology. By doing this Kimura could clearly define which genes were specifically being expressed in the lineage of cells that make the stem cells.

“Our study reveals a set of genes that could be very important controllers for the formation of stem cells,” said Kimura. “Homologues of these genes have important roles in human stem cells and this is relevant across species.“

“Julian started in my lab wanting to study how stem cells are made in the embryo,” said Srivastava, “and it’s an incredible story that when he graduated he had figured it out.”